A Warren of Scuts

FYI, a 'warren' is what you call a group of rabbits, and a 'scut' is their cute little squishy bunny tail. Consider that today's vocabulary lesson. And you thought you just stopped by for the stitchery....

While perusing the posts on some of the linky parties I hook up to, I saw a post that I immediately pinned. Though it didn't feel like spring or look like spring, the calendar said it was indeed spring. So I decided to get with the making (even though it looked like January outside) so I could have an Easter craft under my belt. Following this tutorial, I spent a fun few evenings clipping and stitching and stuffing and tying until I had my own herd (another acceptable word for rabbit groups--are you writing all this down?). 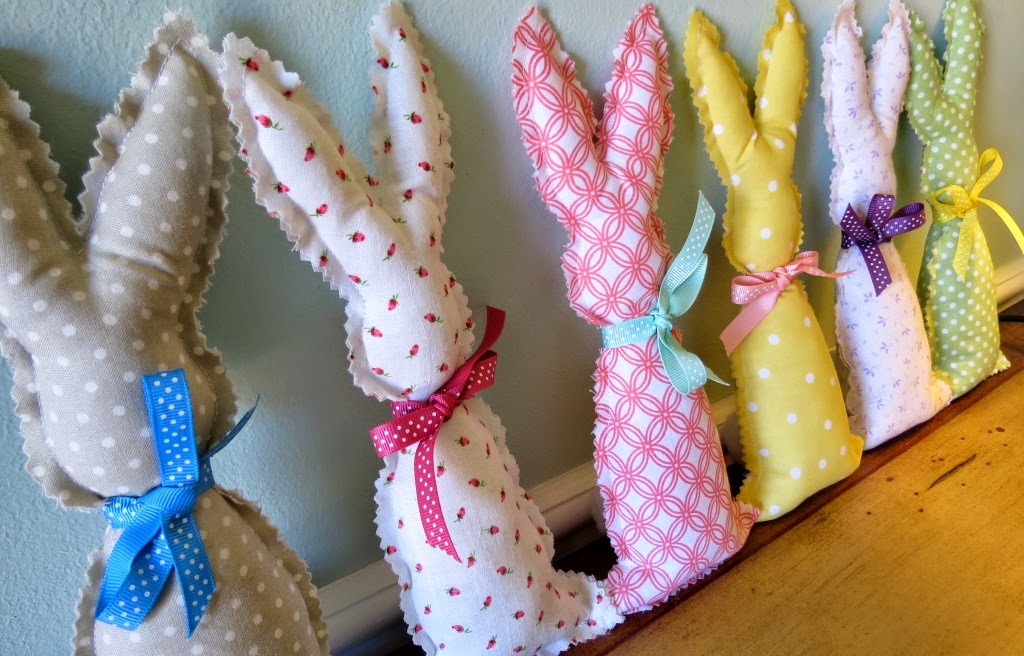 Almost all of the fabrics came from my stash. I bought one--the coral one with the little circles that mimic bunny ears where they overlap. I bought one of those multi-packs of ribbons around Christmas, and used those for the little bunny bowties. 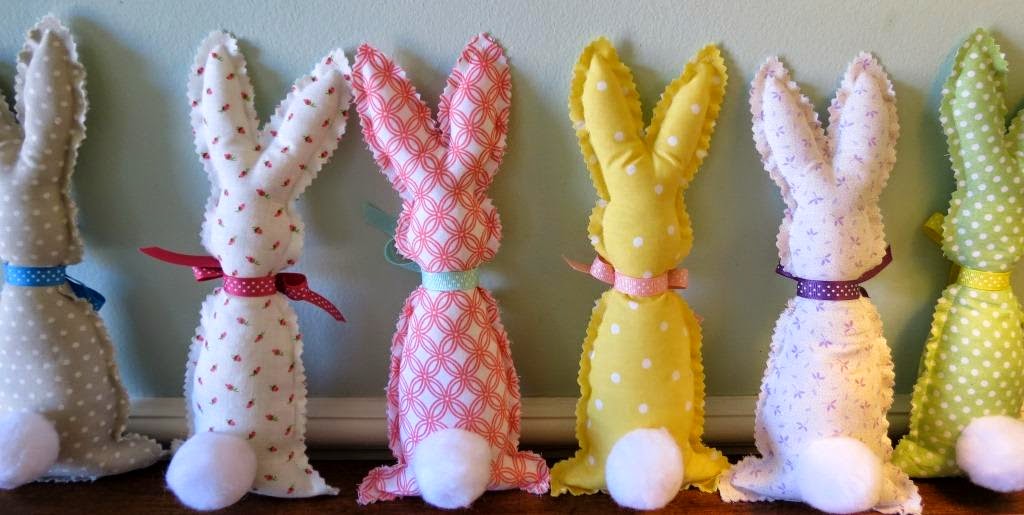 Would you look at those adorable bunny scut butts? I hot glued on a simple pom-pom after spending way too long pondering where an upright bunny would have a tail. I think this view is ridiculously adorable, and wanted to tie the bows facing this direction, but thought that would be pretty dang confusing. I know, I could leave them this way as the bow is implied, but it took me forever to make them look even halfway decent. 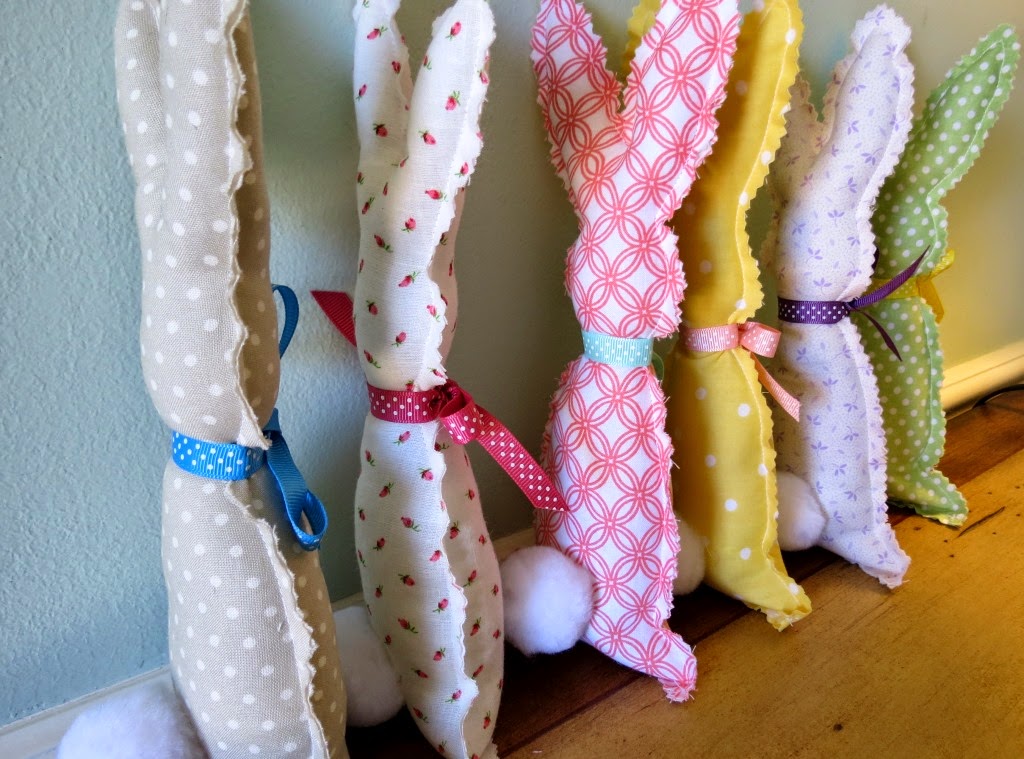 I do believe my favorite thing about these is the pinked edges. If left to my own devices I would have found it necessary to sew these inside out and turn without even thinking of sewing them right sides out and pinking the edges. Sooooo easy this way and I love the look it gives. As usual my stuffing could use some help, but I think I'm at the point where I can accept good enough when it comes to stuffing things. It's not like I do it that often. 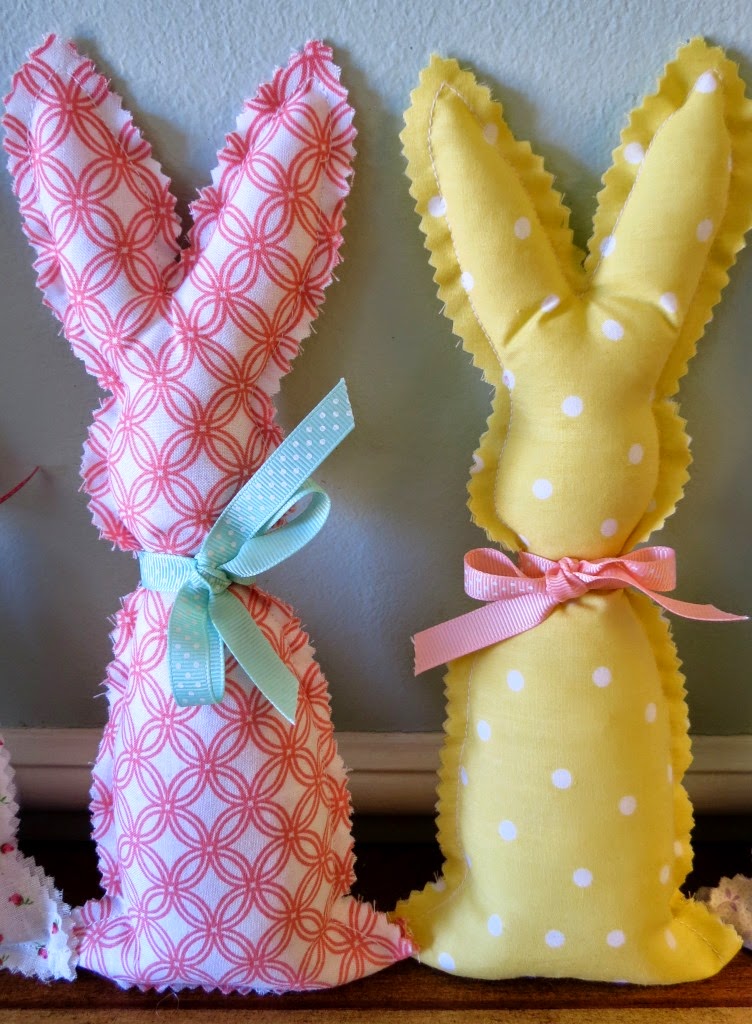 I think these two ended up being my favorite. Throw in some gray and you have my current favorite color combination.

As is so often the case I make things due to cuteness and the neeeeed to have them right away, without any forethought as to what I'm actually going to do with them. So right now they're all standing guard over a basket of fabric eggs I made a couple of years ago. 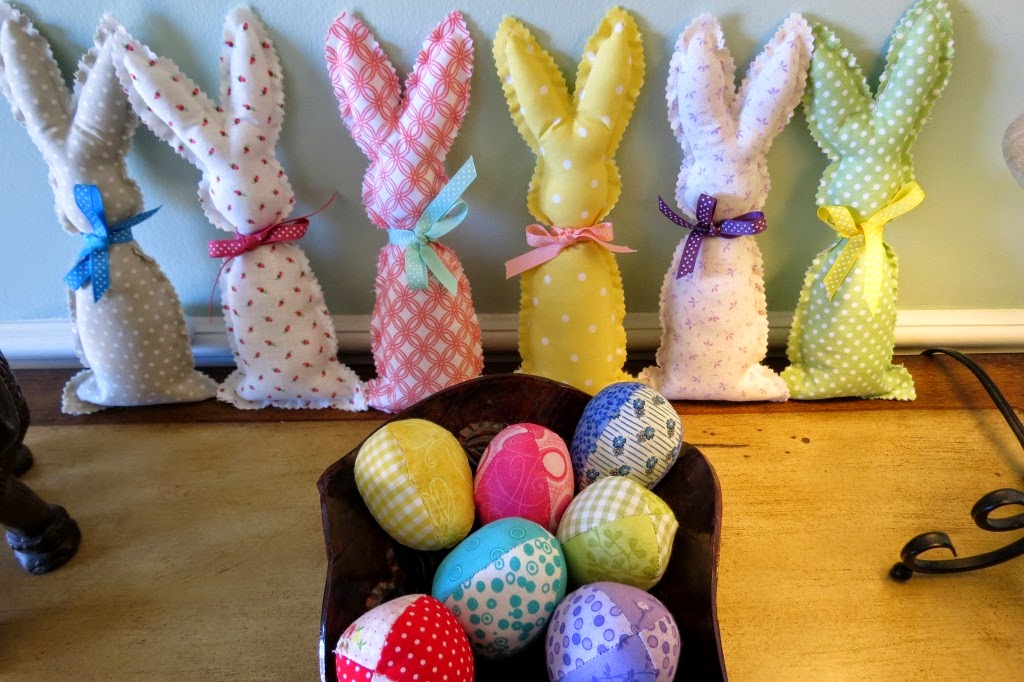 The great thing about these is that you don't need very much fabric to make them, and they are so super quick. It's one of those projects where you almost feel tempted to just keep going and going until you have a roomful of bunnies. Y'know....they'd multiply like rabbits. See what I did there? I'm here all week, folks.
From the convoluted brain of Bethany at 10:45 PM