An Afghan for my Dad

I love to make things for my family and friends. It's very rare that I feel possessive over something I've made, as most of the time I enjoy the process itself. But when I think back over the past ten years (when I first learned to knit and crochet) I can count on two fingers the things I've made my dad--a knitted scarf, and some canvas covers to keep any light out of those giant jug things you use when you make your own wine. Last year, in the midst of some afghan or another, he said to me jokingly "You should make me a Penn State afghan." I gave a quick search and came up with nothing to guide me. I back-burnered it as if I was going to make one I'd have to make my own chart, and if it's not stick figures or rainbows it doesn't get drawn by me.  He never mentioned it again. On a whim a few months ago I looked again, and found a crochet pattern for a Penn State afghan. Here's the link to the pattern. I don't know when the PSU copyright police will intervene (if at all) so if you're interested grab a copy now.

I started this project on Super Bowl Sunday. I'm pretty sure I've made it about twice, once you consider the amount of frogging and restitching I did. The whole thing is done in half double crochet, which always gives me fits along the edges. I literally counted every single stitch for a loooong time to make sure nothing was getting wonky. I finally found my rhythm, running a marker over each row on the page as I finished. I must have been cock-eyed at one point as I goofed up what is essentially highlighting, and had to rip out a third of what I had done. And then I did it again a little later, but not quite so drastically. I spent a few evenings overall not even stitching, but just comparing my chart to my blanket to find where I went wrong, and then wrapping my yarn up to go at it again. Considering that this blanket is a great couch throw size, and the amount of redoing I had to do, it actually came together quite fast. I finished it up this weekend, gave it a wash and dry, and now it's ready to be used. So it figures the weather turned and it finally feels like spring around here. 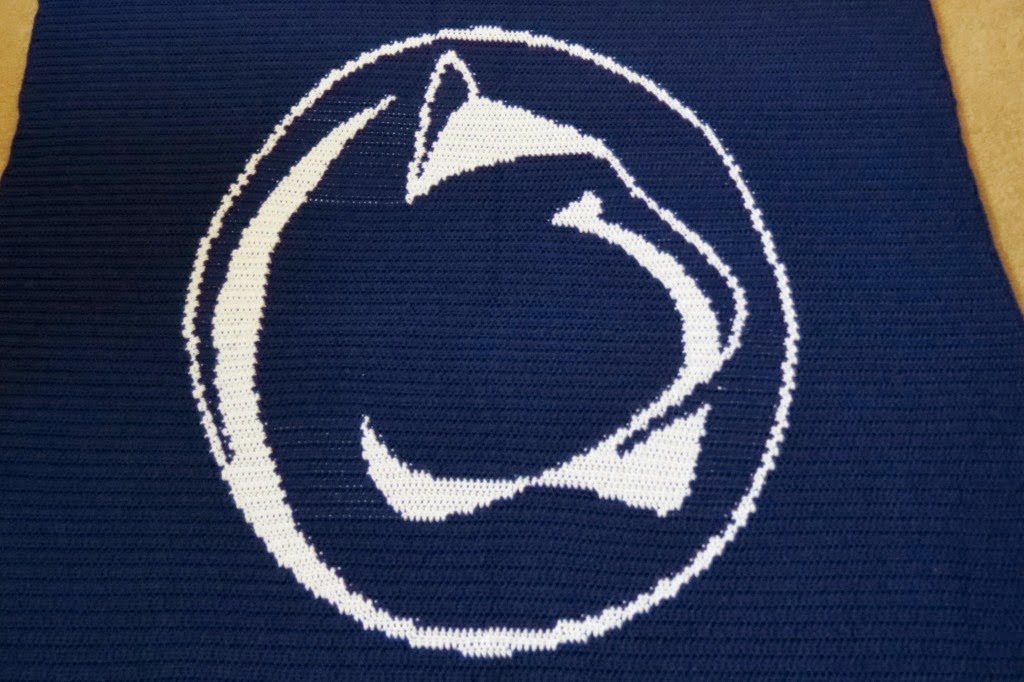 I've never made an afghan like this before, so carrying the yarn in such a way to make it almost invisible from the front was a learning experience. When it's all laid out you can see a little bit of where I carried it, but when I researched how to do this a lot of the examples I saw had the same thing going on so I figure it must be an occupational hazard. I really truly don't care, as I'm pleased as punch that the Nittany Lion came out looking like it was supposed to. 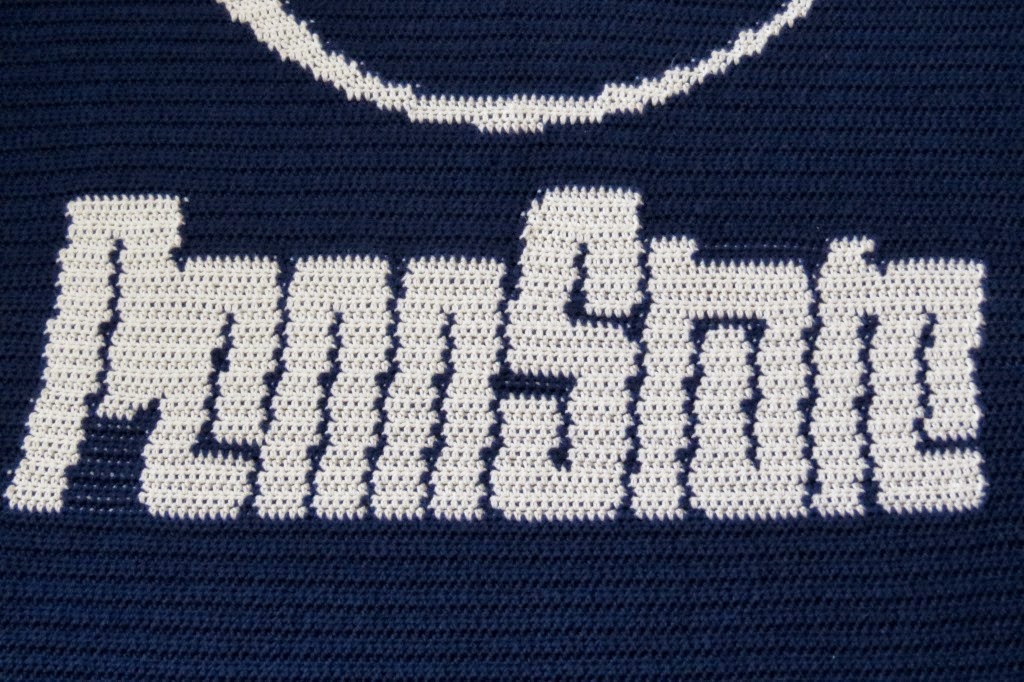 I guess it doesn't matter where you start an afghan like this, but I started at the bottom. The letters are pretty blocky and close together, so it was good practice for minding the yarn. 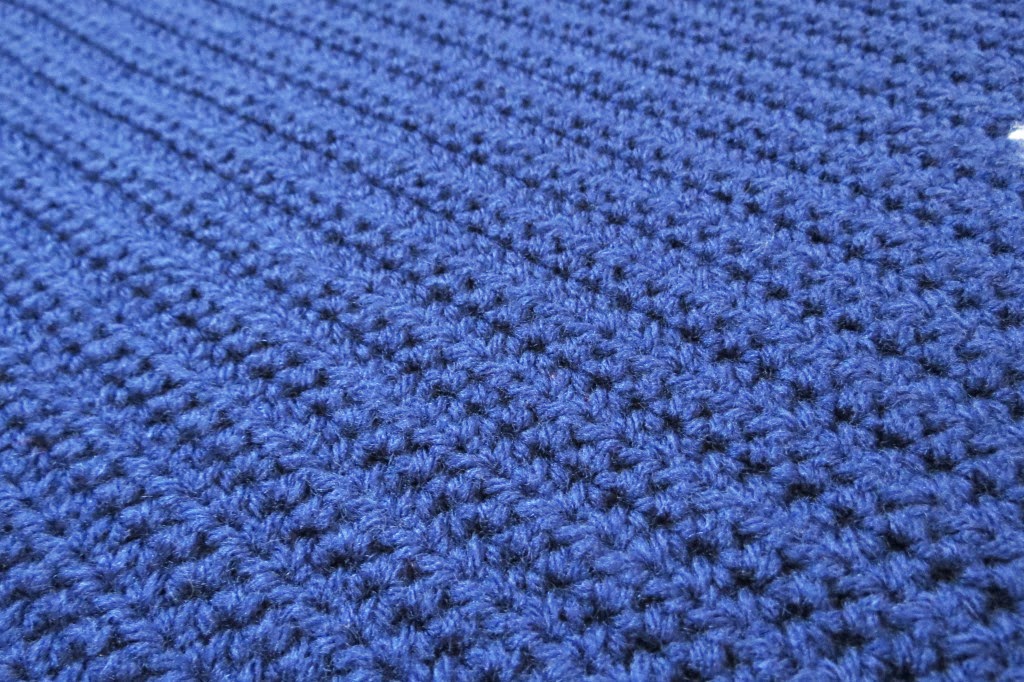 Doing an entire afghan in HDC was quite tedious, and I might have lost my mind were it not for the logo breaking up the monotony. I really like the texture that results from it. I don't know how I used to make all my afghans in one color (I feared weaving in too many ends so I avoided color changes). When I think back so many of them were just one solid color--I don't know if I could do that anymore for anything beyond a baby blanket sized project. I almost look forward to the color changes to see how they all play together. 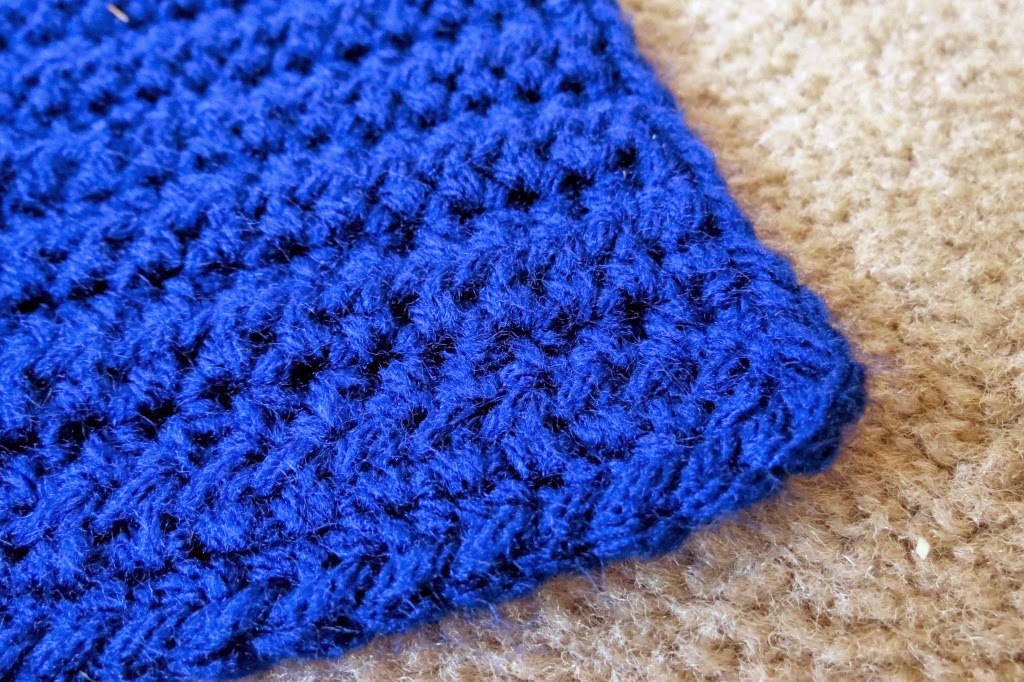 I put one row of single crochet all the way around to neaten the edges and finish it off. My fingers were SORE trying to work that hook into my stitches on the sides. I wished and hoped the whole time that I wasn't creating ruffles or pulling too tight. But everything came out nice and smooth.

Due to this not being the most relaxing project, tension got the better of me, and the sides are a little wavy. But I don't care. Who lays an afghan out on the floor nice and flat and keeps it that way? No one. Around here they're folded or rumpled, on the couch or recliner, usually with someone snuggled under one. As long it fulfills the purpose of a blanket, I don't give much of a hoot about imperfect edges.

So you wanna see the whole thing, then? 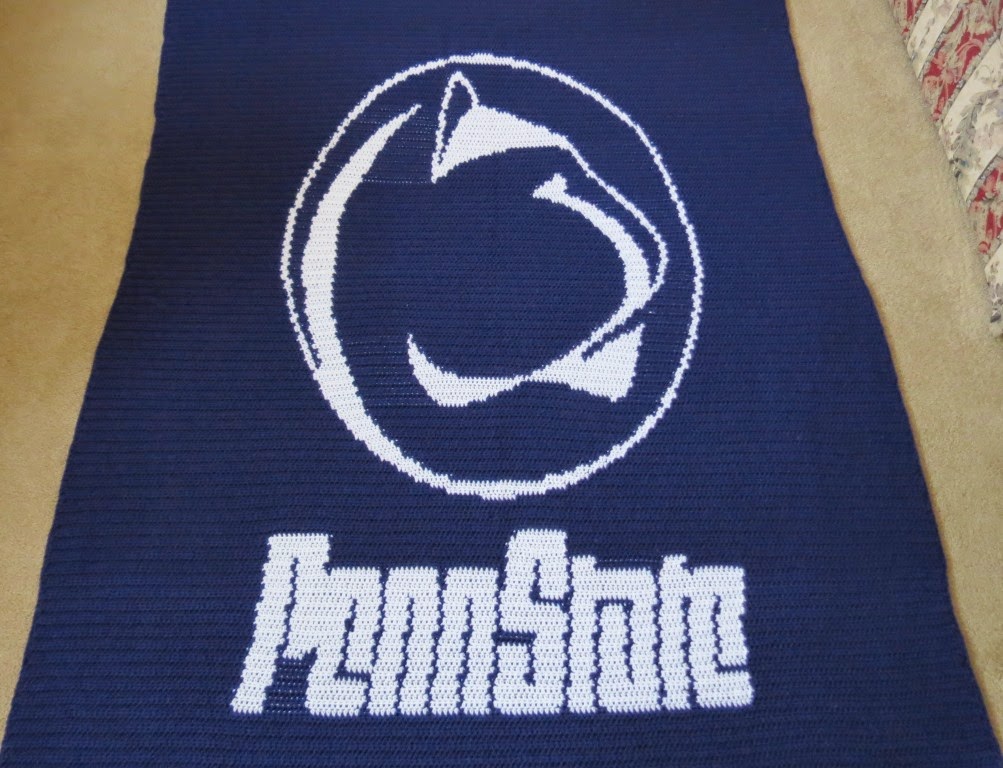 I used plain old Red Heart yarn in soft navy and white (I didn't think navy would be so hard to photograph consistently, as it shows a little different in some pictures, but it is indeed navy). I ran into an interesting thing. Most of my yarn was similar enough, but one of my skeins of blue (and I bought the jumbo size) was weird. The yarn felt very thin, almost like a sport weight. When I bought more to compare them it was interesting to see the difference. I've never encountered that before within the same brand, but it's something I'll be keeping in mind in the future.

This was probably one of the more difficult things I've ever made. Which should make up for the fact that it's only the third thing I've ever made for my dad. This should count for fifty things, at least.