I recently received a review copy of the soon-to-be-released book Craftivism: The Art of Craft and Activism. When I was asked if I'd be interested, my attitude was one of "Sure, why not? Might be interesting." I was pleasantly surprised at just how interesting it is, as well as how quickly I devoured it. It's largely a collection of essays written by folks who use their craft to make an impact on the world, whether through providing blankets for warmth, pieces for political movements, or food for thought. 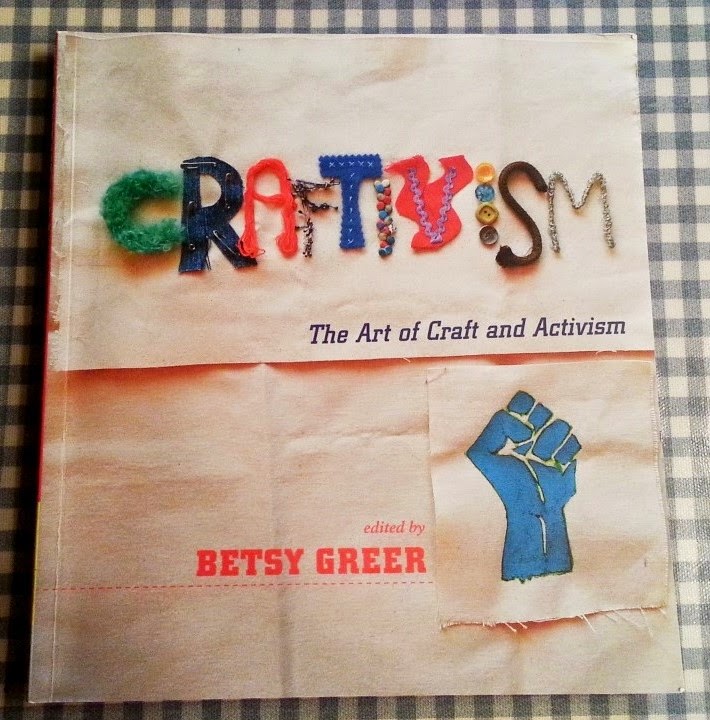 Loooove the way 'craftivism' is shown-- 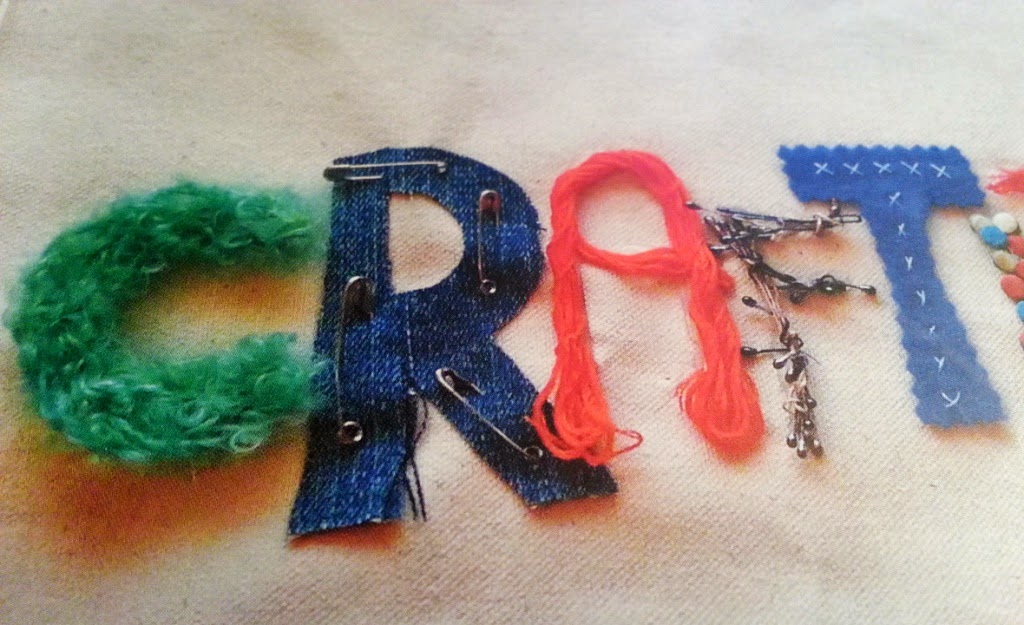 The part that drew me in was the opening of the very first essay. I found myself nodding vigorously with agreement. Sayraphim Lothian makes pieces of art that she leaves in cities around the world (!) for strangers to find (and keep, if they like). Her philosophy is summed up in the first paragraph:

I'm a joyful optimist. I want the world I live in to be a wonderful place, a place where neighbors chat to each other over fences and people new to the building are welcomed with a plate of home-baked treats. A place where, if you walked along a footpath in the city, you might find a random piece of art hanging from a tree or a poem inscribed on a wall. I want the world to be a place where magical or surreal moments are commonplace, where you never know what's going to be around the next corner.

It brought to mind the story I read this winter about the person leaving scarves around the city of Ottawa with a note telling folks that it wasn't missing or lost, but was placed there in case the finder was in need of warmth. How delightful would life be if something fun, or even something that we needed, was just there, literally around the corner, waiting for us to stumble upon?

There's the tale of an art show where the pieces were sold for the hefty price of "ten random acts of kindness to a stranger." I often get criticized for how I price my goods. I don't charge nearly enough, and I so know it. Perhaps I'll attach a secondary price tag of random acts to make up the difference, and have folks pay it forward.

There's the story of the girl who leads workshops in making things ugly. Folks sit around a plethora of materials and make dolls or toys that are deliberately less than attractively formed. Not focusing on perfection not only makes the experience more fun, but also forces people to let their guards down a bit as there's no pretense of perfection to hide behind. I feel like there's a lesson for world leaders in there somewhere... 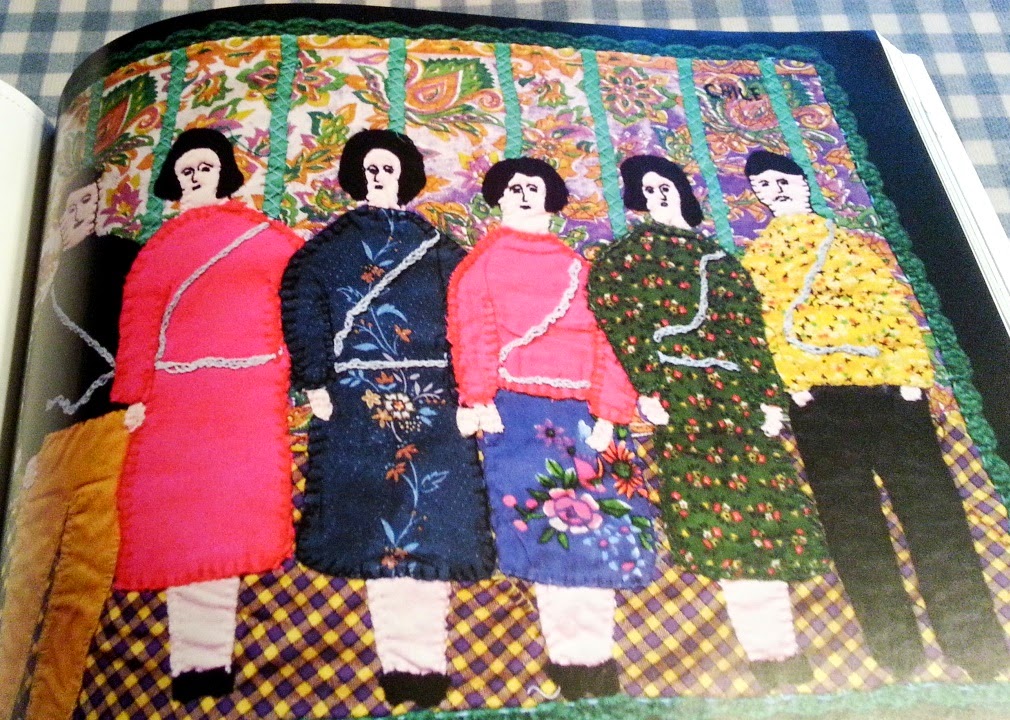 Specifics weren't detailed in the book on the quilted pieces, but they're hugely metaphorical. I totally dig the 'secret code' aspect of these.

Perhaps the cutest thing in the book is this knitted mouse: 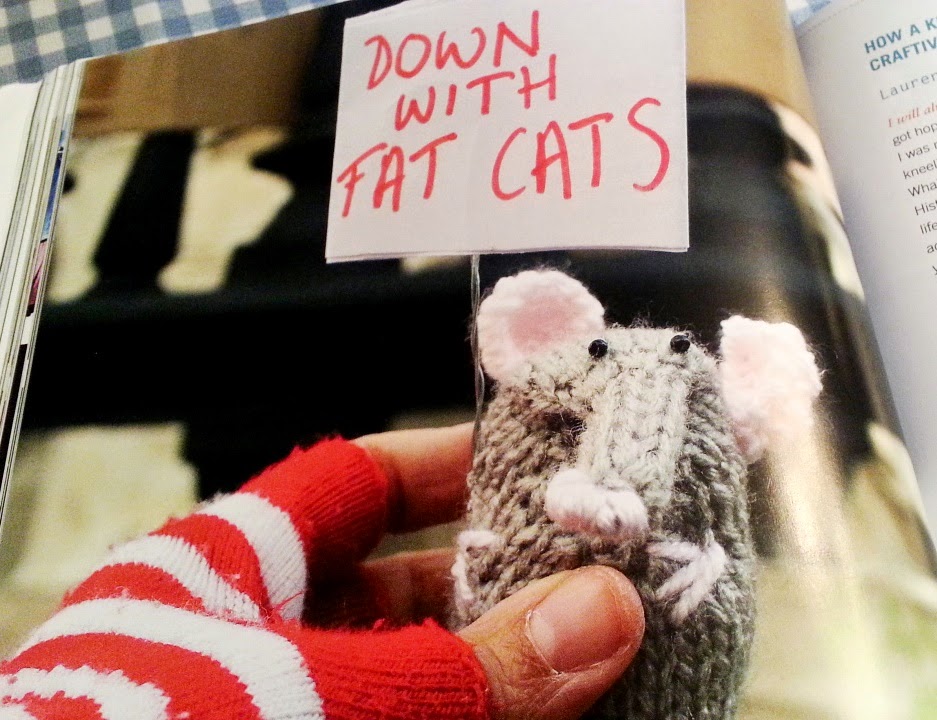 Remember a few years ago how 'Occupy' set up camp in cities around the world and led protests against the elite rich by the more abundant have-nots? This mouse was a bit of a mascot for a London protest. Give the toy to a child and it means something harmless in a Tom and Jerry sense. Give it to a seasoned adult who works hard for their money and it means something entirely different.

Like any book of this sort, there were some aspects that I barely skimmed. The interviews weren't the most interesting parts, and there were one or two essays that were a little dull. But for a book that isn't very big, so many crafts, so many movements, so many ideas and people and personalities are covered within its pages that it shows how anyone can use their craft to improve their world.

Over the past ten plus years, since I first started making things, I have made scarves and hats to donate to a local school. I have used up leftover yarn to stitch up squares to send to Warm Up America. I've used a ton of stash fabrics to make pillowcase dresses for girls in Africa. I've made bags to be auctioned off at fundraisers. Money doesn't excite me. I enjoy the creative making process, and I love the idea that someone, somewhere may be a little bit warmer because I tend to have craft supply buying issues. I had no idea that I was being a craftivist, or being part of some kind of movement. It just felt like a nice thing to do.

So would I recommend this book? Absolutely. There's something for everyone--cross-stitchers, refashionistas, quilters, community artists, and so on. And who knows. Maybe I'll start leaving little doo-dads around my city (because heaven knows I am NOT a world traveler, harharhar). And when people cock their heads and scrunch their noses and ask "Why do you like to do that?" I can tell them that I make a difference. Maybe not to the world, but at the very least to my world.

I was not financially compensated for this post. I received the book at no charge in exchange for an honest review. The opinions are completely my own based on my own experience. For my complete disclosure policy, click here.
From the convoluted brain of Bethany at 9:30 PM