A few weeks ago we were asking my sister what A-train wanted for his birthday. And she responded with suggestions of things he "really wanted." One of the things was a backpack, so I asked her what she was visualizing with that as my wheels were turning. She described her image, and then said that he loves helping her pack his bag when they go somewhere, so she thought he might like his own bag to carry. After my heart stopped feeling squeezy from the cuteness of that statement and the resulting image, I told her I would make one for him. Usually I try and draft my own patterns for things, but sometimes I just don't feel like it, and this was one of those instances. Besides, for a few years I've wanted to make the Made by Rae Toddler Backpack, but didn't have a reason to. After a quick trot to Joann's I was stupid eager to get started. 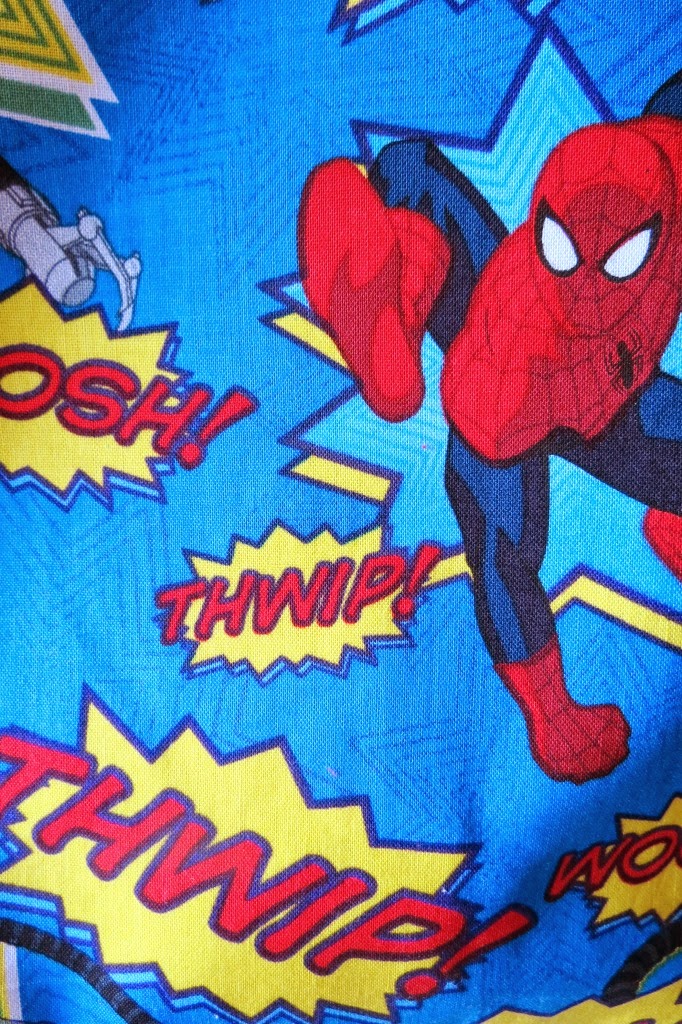 I tried to find some good, solid train fabric but couldn't find anything just right, so went with Spiderman, which he loves. He was playing with his little friend Noah, who was acting like a monster (I don't mean behavior-wise, I mean in a role-playing sense, hahaha) and A-train flung out his hand and said "Thwip!" which is what Spidey does, I guess, to tame evil-doers. I tried to cut the fabric so as many 'thwips' as possible were visible. 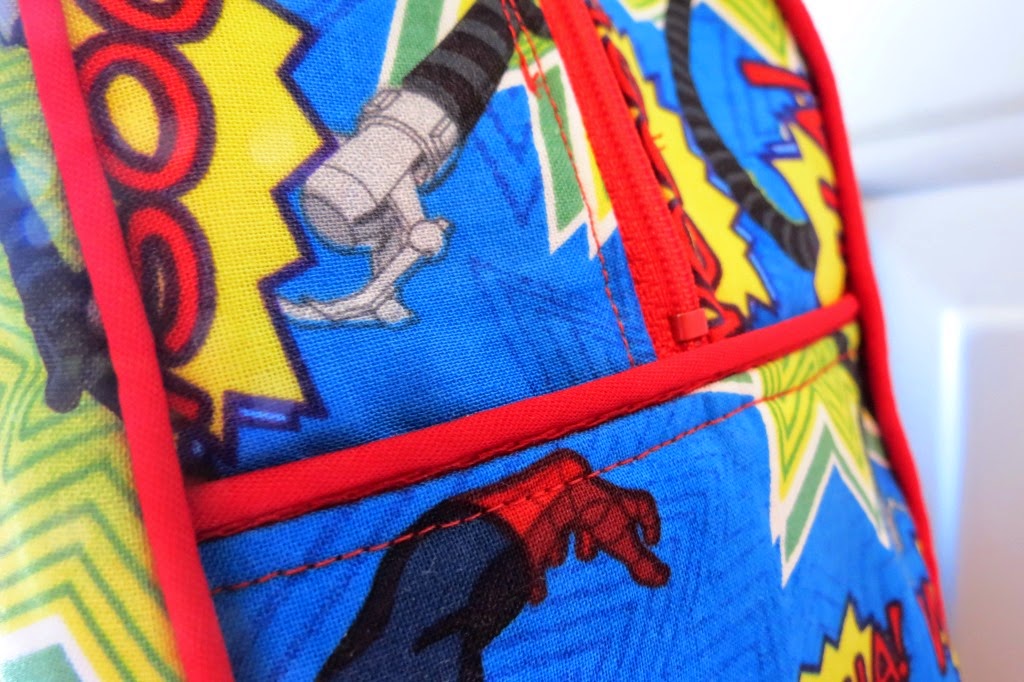 Doesn't piping just make everything better? I had a bit of a time getting this gusset in just right. I greatly dislike when I buy a pattern and there's that 'just make it fit' statement thrown in there. If I'm paying for something I do so because I expect it to fit already. But truly that was the only glitch in the making of this--the rest went together as smooth as silk, and was actually quite fun to make. 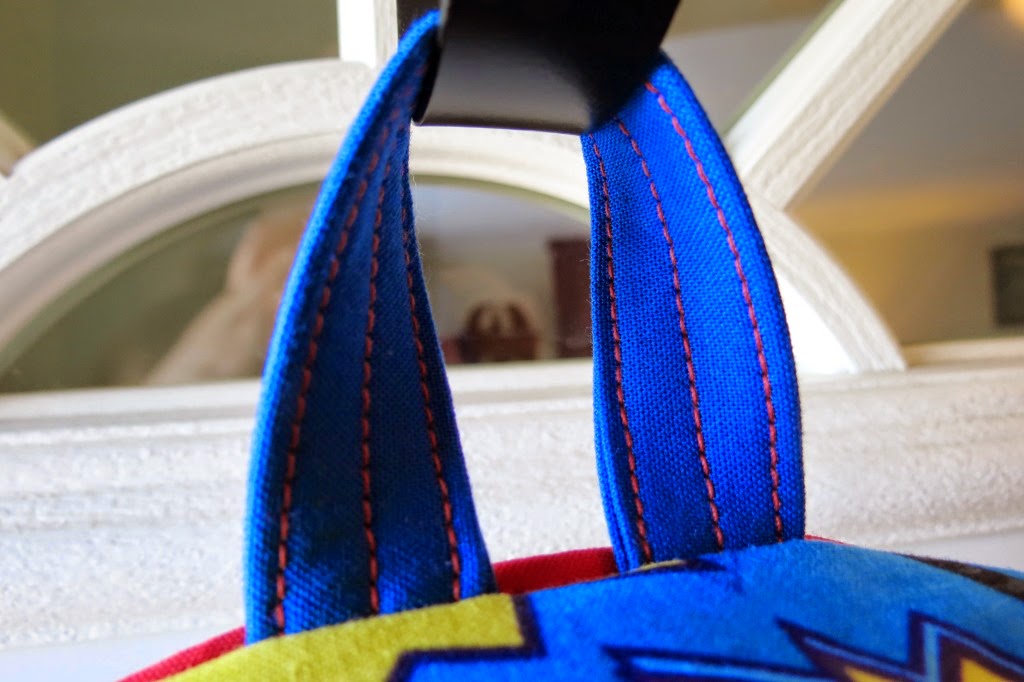 I discovered at an unfortunate time of day (i.e. the stores were closed) that I had not a lick of bright blue thread. I did have about four spools of red, though, so the loop and straps all have red thread, and I do love the look of it as I actually managed to not make a sloppy job of straight lines. 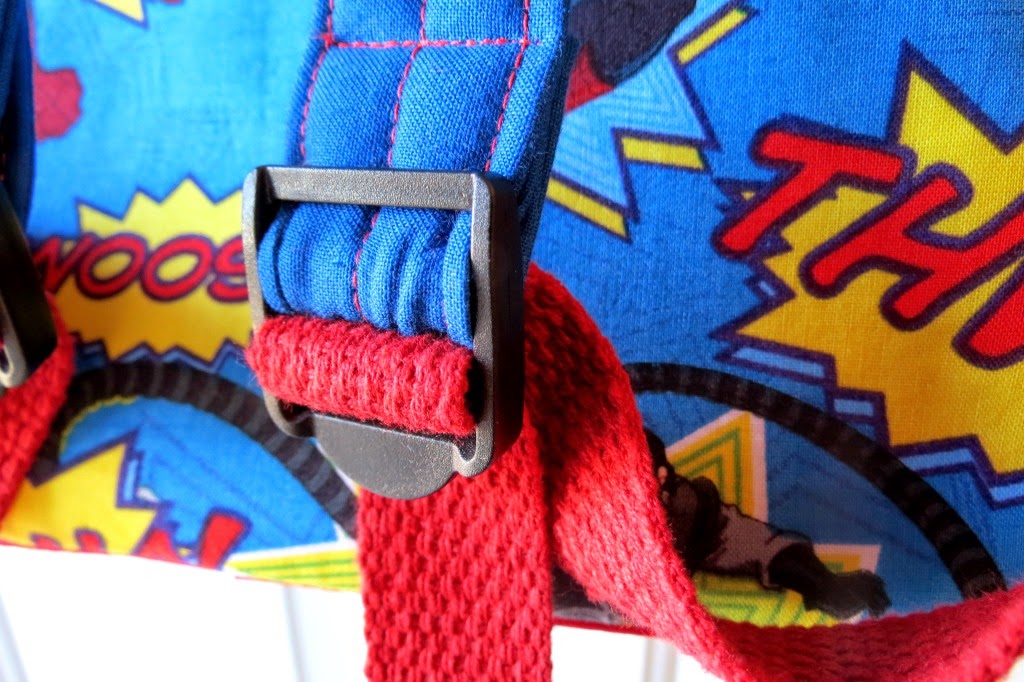 I wish you could see the teeny cuteness of these straps in real life. I stopped to take a picture to send my sister because they were just that adorable (due to the size--I'm not patting myself on the back here, haha).

Are you ready to see the whole thing? 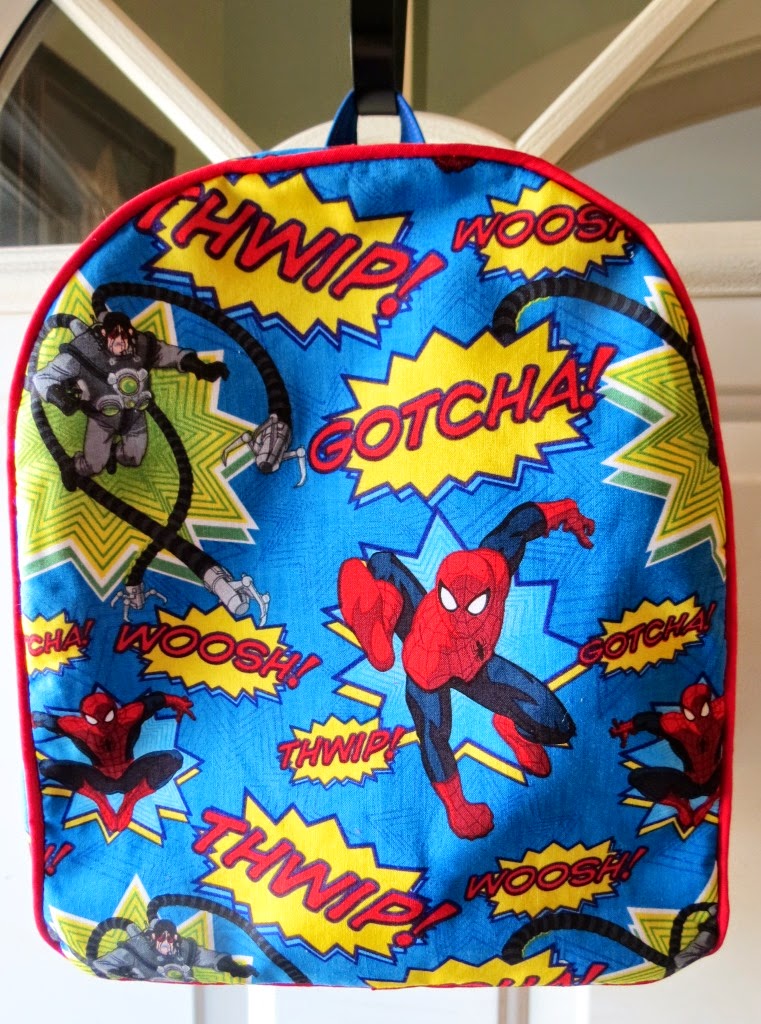 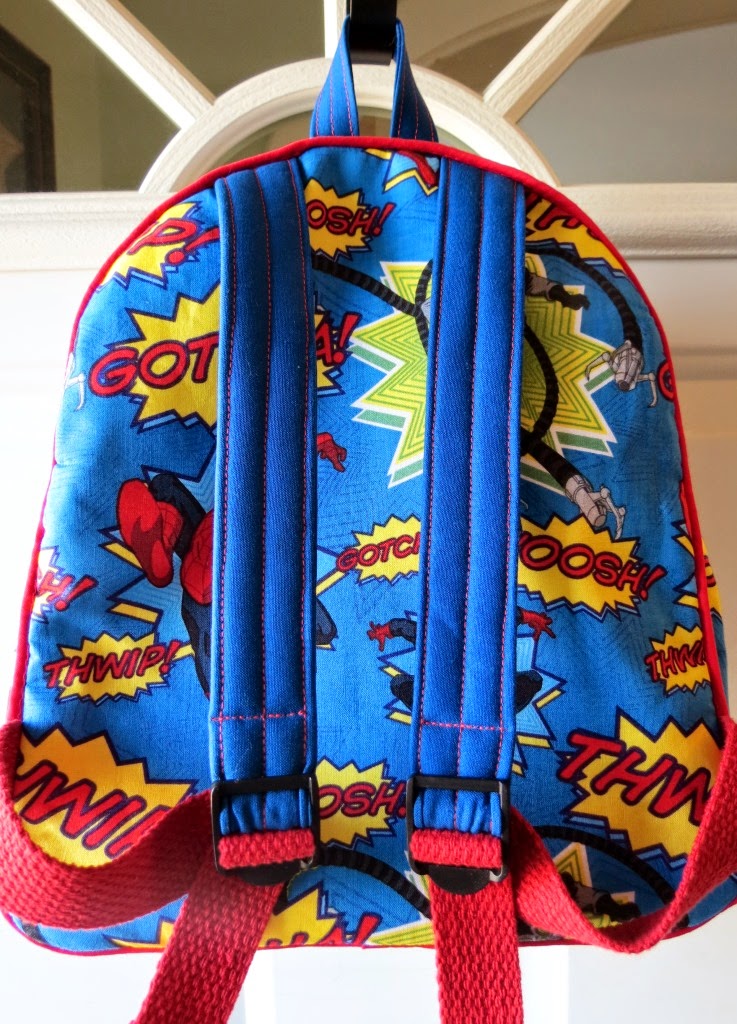 The pattern called for a canvas fabric to be used, but there's nothing cute in the stores, and I hesitate to buy certain things online if I've never used them before. So I used regular quilting cotton, interfaced with Shape Flex 101. Then I threw in a layer of craft-weight Pellon #50 sew-in. It gave it a nice structure without making it too bulky as where the straps, gusset and bag front/back come together it gets layer-licious, especially with the piping. 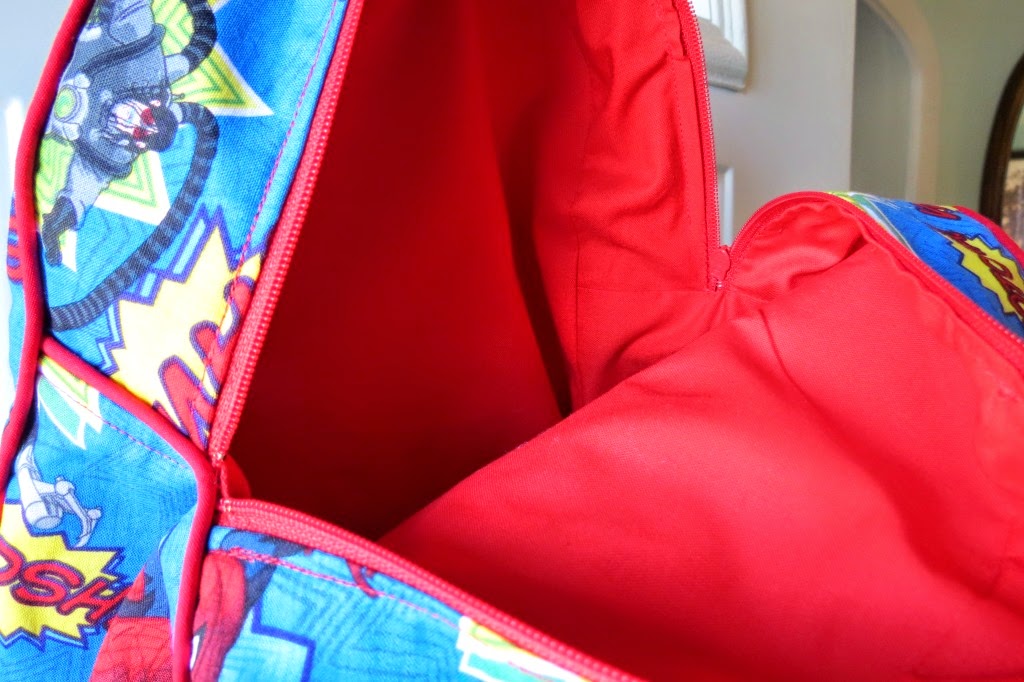 I also added a lining to it. It was a little fiddly doing the hand-sewing bits as it was a weird angle, but it's in there nice and tidy. Usually I purchase YKK zippers and replace the standard pull with a longer one, but this time I used Coats and Clark. I can't replace the pull on those as they don't fit proper, and the pull seemed so teeny, so I went scouting for a cute zipper pull. I tried for Spiderman, but I didn't need a set of five superhero pulls, so I went another route when I came across a shop that offered the below-- 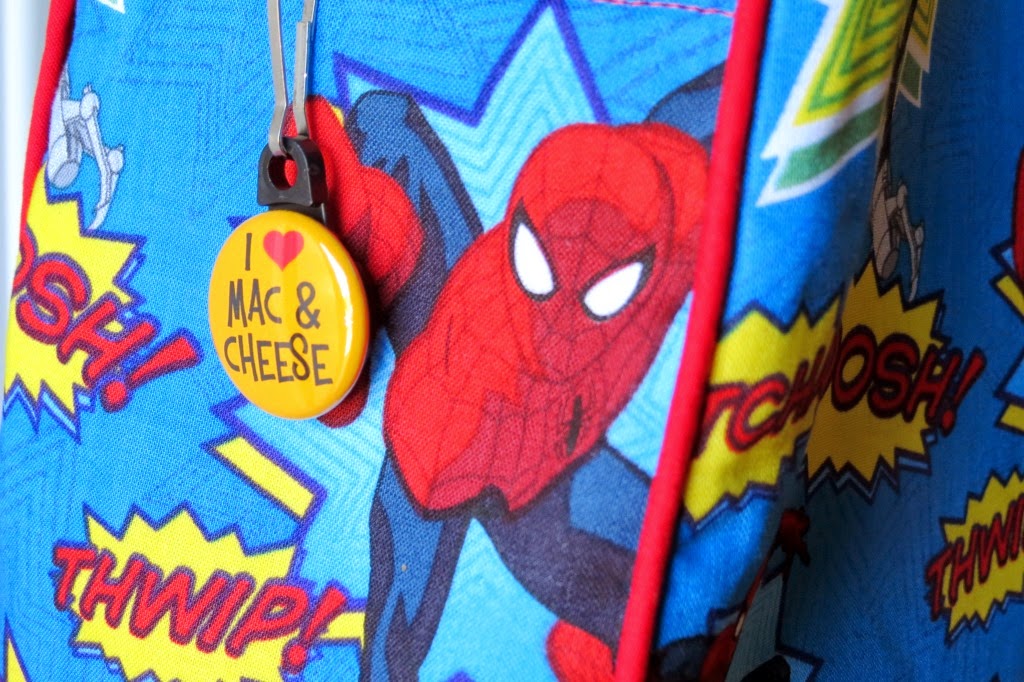 When my sister and BIL Matt were teaching A-train to say his name he'd say "Mac-n-cheese" when he got to his last name. Every time. So stinkin' cute. So you see why I had to get the above, right?

Gusset-fitting issues notwithstanding (and it wasn't really a major ordeal, more like an annoyance) this was a lot of fun to make, and quite easy. It's a good thing I got distracted by other projects, as this is one of things I feel like I could just keep going and going with until I had fifty bags and no toddlers to foist them upon. 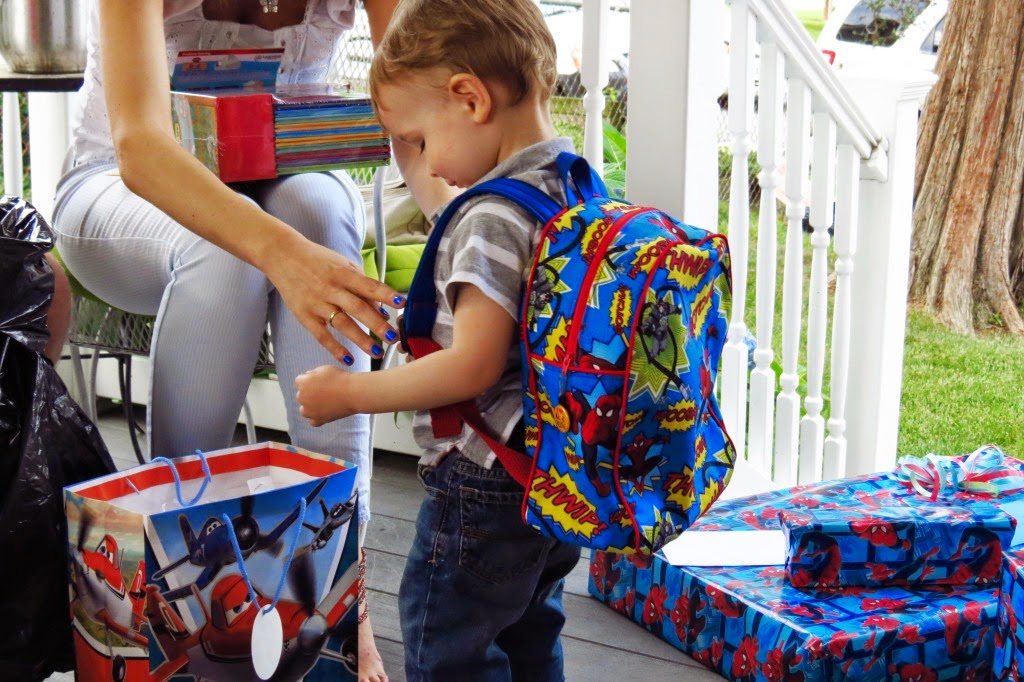 It looks so teeny in actuality, but so big on a tot. I'm glad I went with Spiderman, as he'll probably outgrow trains before he outgrows the bag. But if he doesn't I'm fine with making more.
From the convoluted brain of Bethany at 9:51 PM