Ready to see a few quilt blocks? I figure that four blocks are enough to not make your eyes glaze over while I explain my thinking behind their making. I do realize that the whole economy quilt along craze is done and over with and soooo last quarter at this point, but I like to catch some trains later than others as I feel like the project appeals to me much more when the idea just seems....right. Sometimes I'm so eager to do something I jump right in and either get bored or regret my fabric choices, so waiting felt just right. Anyway, the tutorials I was coming across were for blocks that were too small or too large, or had such weird cutting measurements that I knew I would go slightly mad. After poking around a bit, I found this post that shows you how to make an economy block in any size by first going over the math (ick, no thanks) and then providing a handy cheat sheet. I decided on seven-inch (finished) blocks because the cutting measurements are whole numbers, and because (as an afterthought) I realized that my only square ruler is 7 1/2 inches. Meant to be. There's a bit of trimming involved but I sincerely do not mind it one bit. OK, onward.

I'm going to go through in the order I made them, so here are the first four. 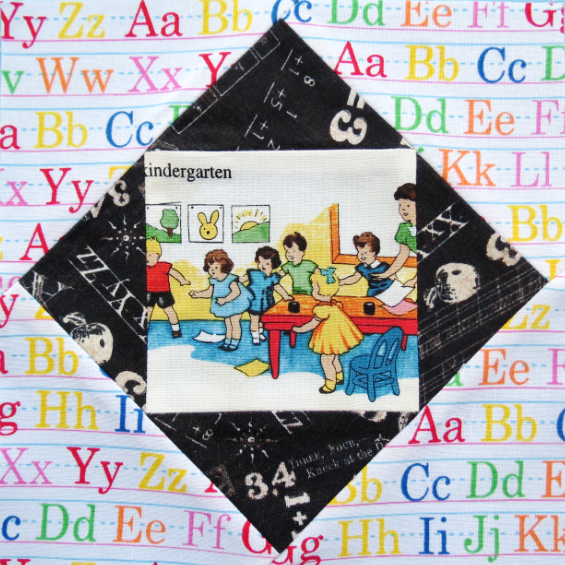 This one is obvious. It's a school block. A larger middle section would have been nice for this one as there was a goat in the classroom and that's what they're all looking at. But I kind of like that only I (and now you) know what all the fuss is about up there. The surrounding black fabric is a chalkboard print (which I later found in green, too). The letters I had leftover from something or other and fit right in with this one. 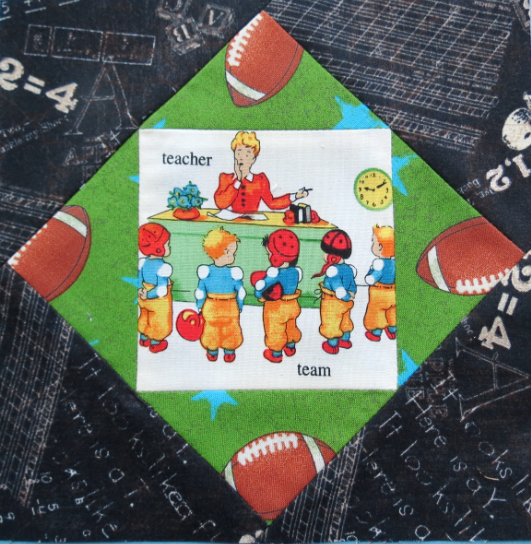 This one? Well, clearly those adorable little guys are late for school because they were playing football. Now they have to go to the blackboard and write out "I will not be late for school" twenty times in their neatest writing or else. In the chalkboard fabric on the lower right--see where it says 'It looks like...' It got cut off (obviously) but the rest of that sentence is '...a toe.' It looks like a toe. That's what that says. I don't know what is supposed to look like a toe... I hope that the designer worked that oddity in to see if anyone would notice. I love stuff like that. 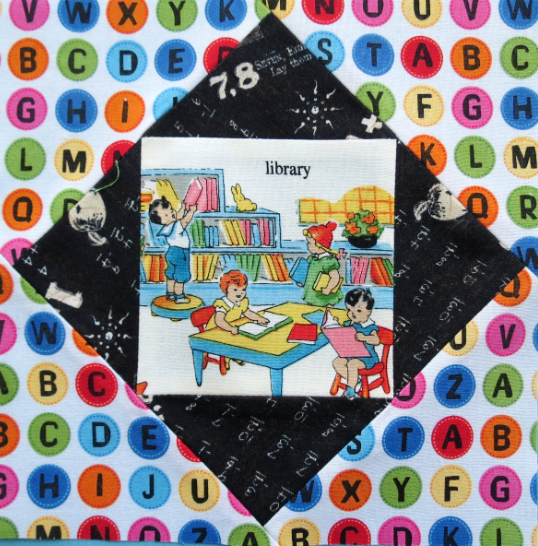 These kids are the teacher's pets. They finished their blackboard math problems first, so were able to go to the library and help the librarian make sure the books were all in ABC order. After that they became the class bad-asses because that was the most boring task imaginable. 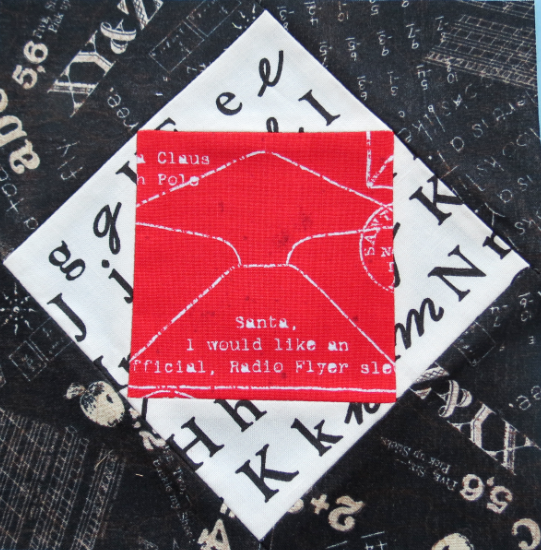 "I want you to write....a theme. 'What I Want for Christmas.'"
This is my A Christmas Story block. Ralphie's notebook that he wrote his essay in was red, and the envelope has some similar wordage to the Red Ryder compass in the stock theme that earned him a C-plus. I just love these colors together!

I haven't laid these out in any way, shape, or form, so I have no idea what this is going to look like. I just keep adding to the pile. I thought I might make it a throw and then got excited as I'd be about halfway done already. But I don't know if that'll be enough. I am honestly having a lot of fun making these, even with all the trimming and pressing. It doesn't seem like work this time around.

More to come soon! And I've got a few other projects going that I'm excited to share. See you soon!
From the convoluted brain of Bethany at 10:03 PM