A certain little boy I know turned two over the weekend. And you've never seen a two year old more excited to have a birthday. I am not kidding. The other day we were babysitting and the ice cream truck came by. He had a good old time telling people he was two and was going to have a "Thomas birfday." Little ones are so fun at birthdays and Christmas. When they get to be teens (or close to it) they're all "Can I just have my gift? And don't kiss me."

As the babycakes loves so many things, but especially trains, my sister went with a Thomas the Tank Engine (Thomas and Friends? What's it called these days?) themed party. My brother in law Matt built a cupcake stand for the oodles of cupcakes my sister made. The picture doesn't do it justice and I didn't get a shot of the whole thing because you would have seen my piles of crap works in some form of progress, but it was stinkin' adorbs. 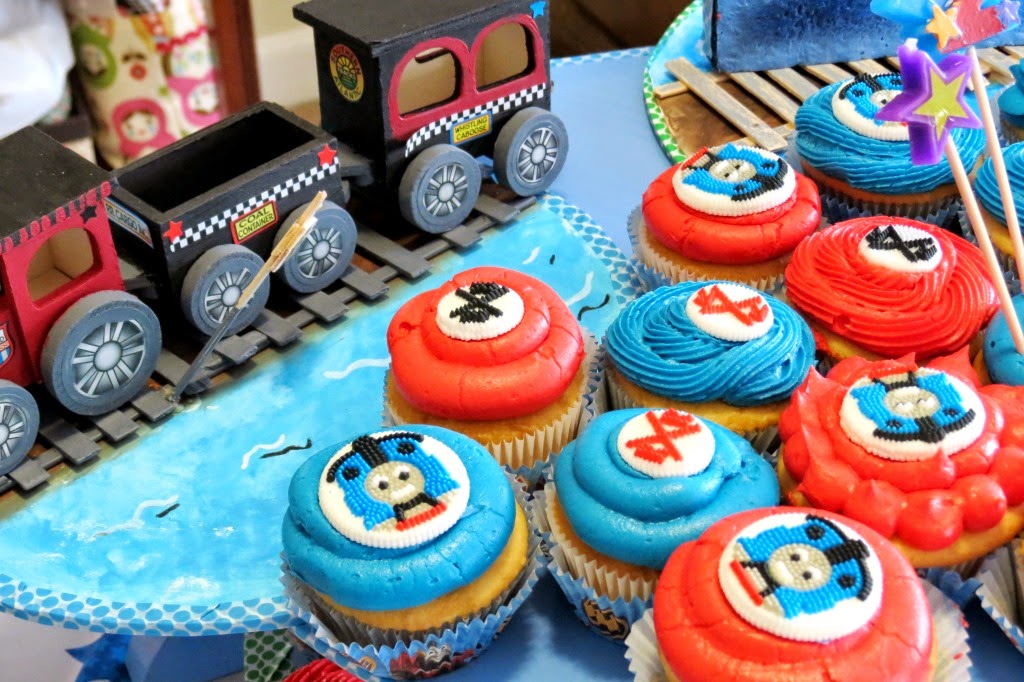 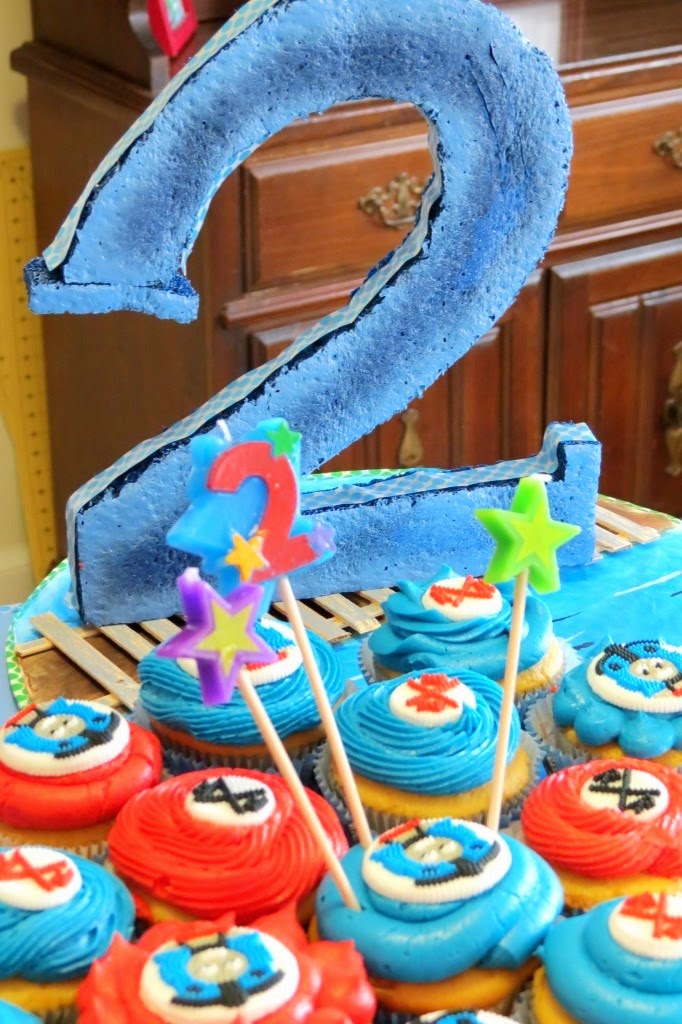 Technically speaking I could not tell you how he did this. I know there was foam, cardboard, paint, washi tape, and a wooden train he painted. I have no idea how he put this tiered contraption together as I couldn't take it apart to figure it out as it was holding the cupcakes (and oh my word were they delicious!).

This little lovebug loves singing happy birthday. To others, to himself, for no reason other than it's Tuesday and he already sang 'Twinkle, Twinkle Little Star' four times. Look at the joy on this boy's face: 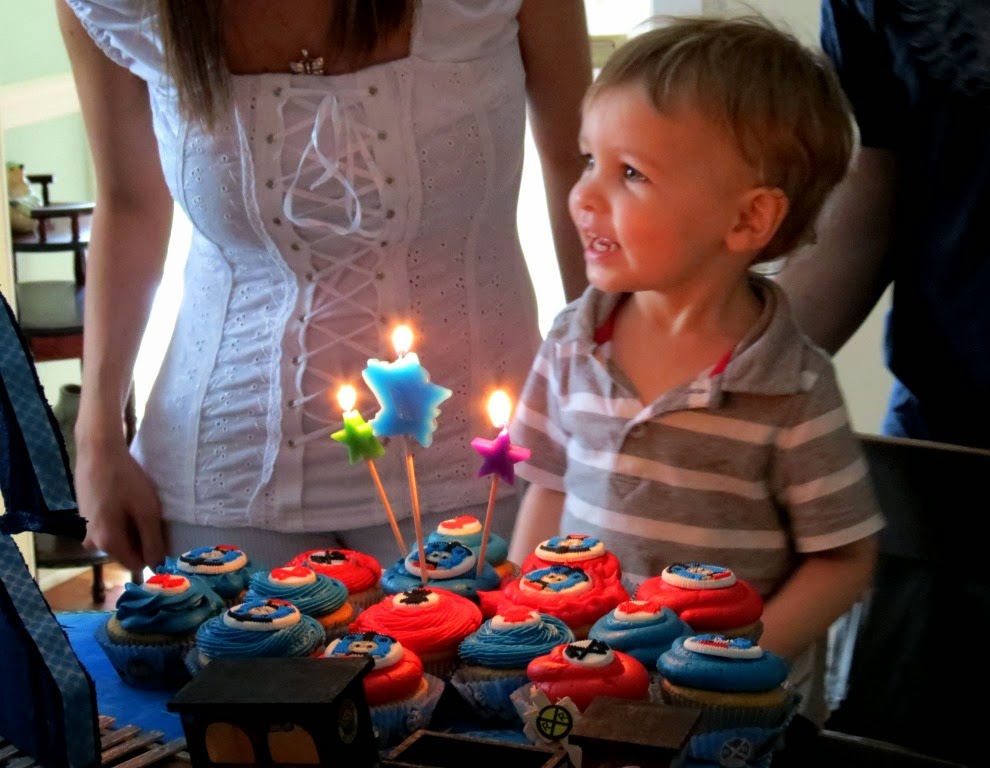 And the pride when he blew out the candles (after clapping his hands and saying "Yay!!! I did it!!!" 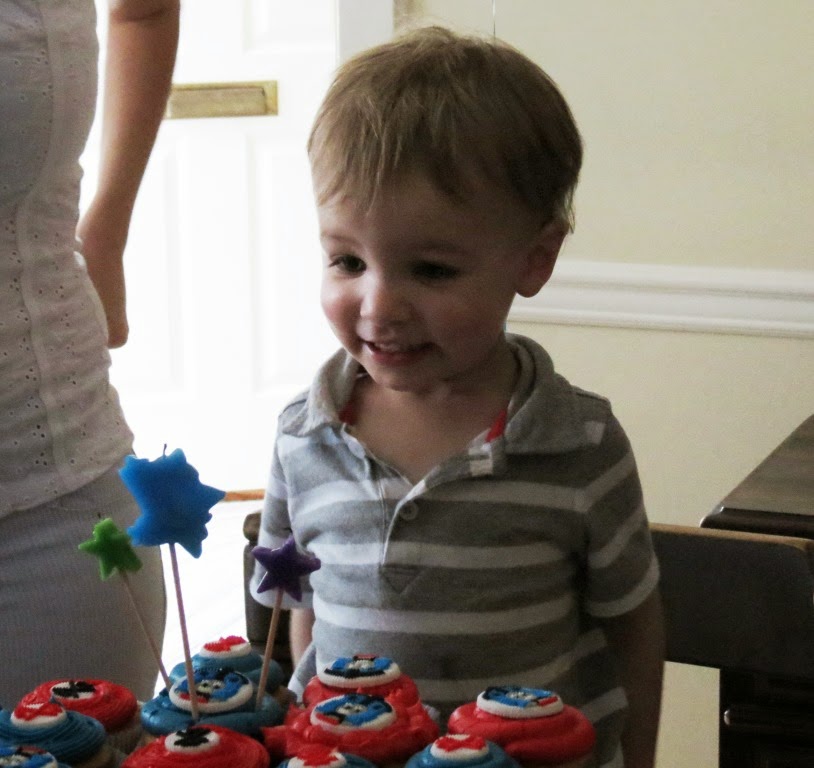 And then, the presents. Every one elicited either an "Oh, yeeeeaaahhh!" or an "Open it!" My favorite was this reaction--an "Oh yeah"-- 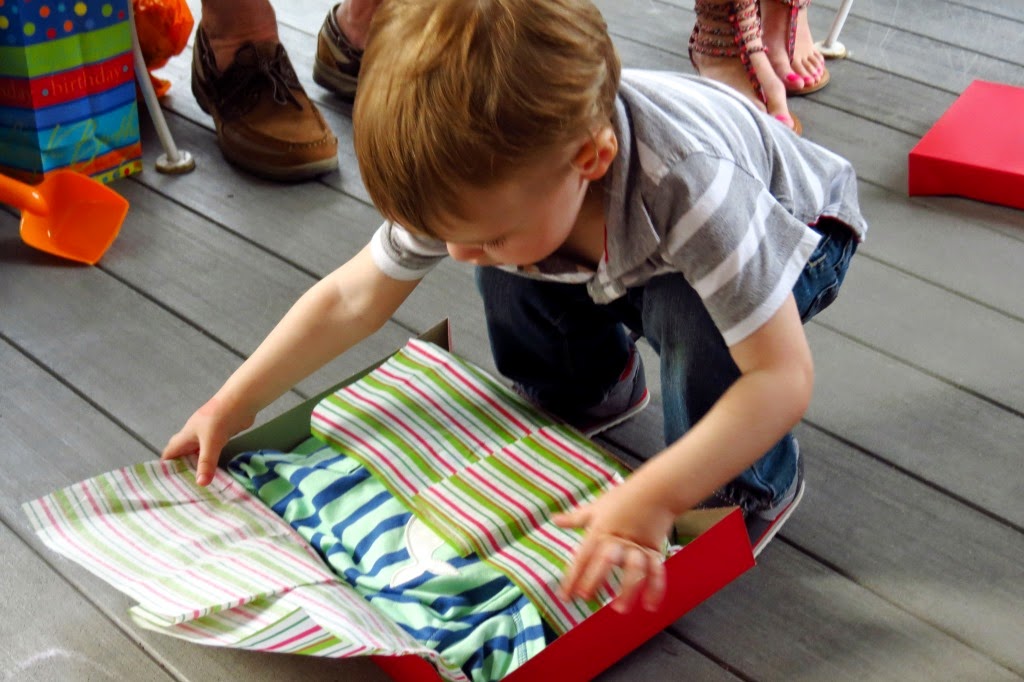 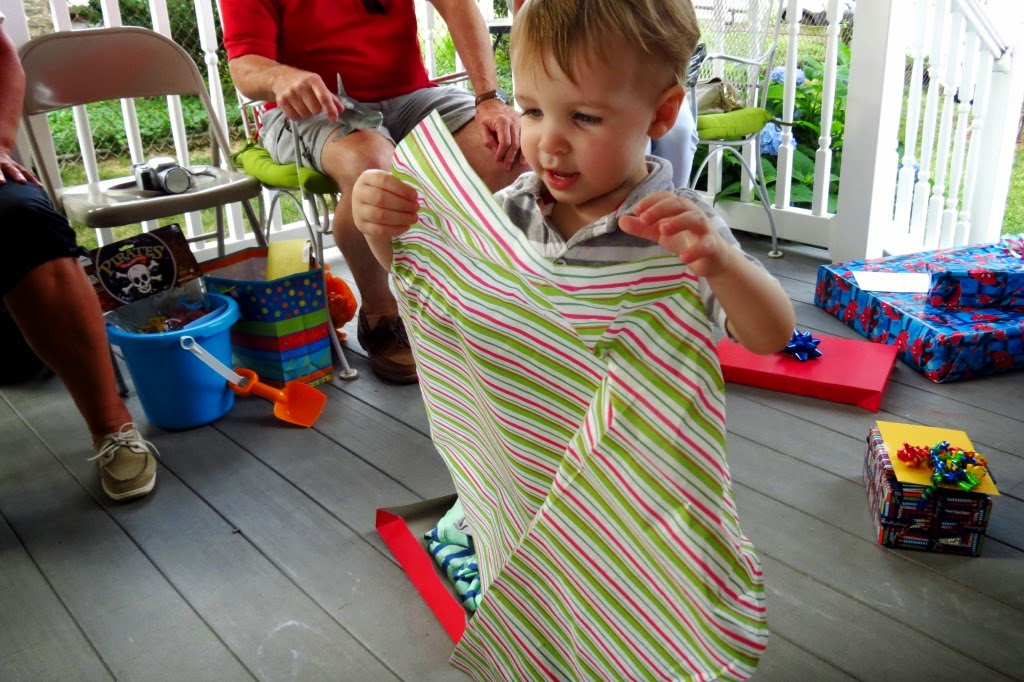 --playing with the tissue paper. In his defense, I really like that paper too :)

I got him a game for his Leap Pad, a little set of books (I always try to make a book part of a kid's gift), and a backpack that I made for him that you may have seen in progress on Instagram. 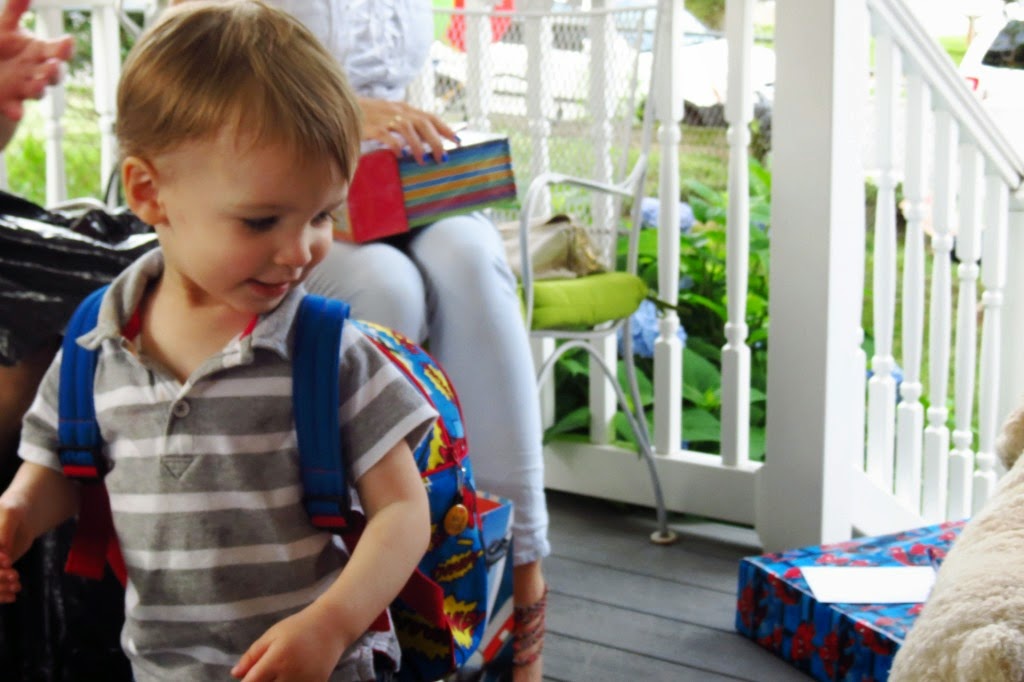 He kept trying to see what was on his back and turning around to see if it was still there. It was absolutely precious, and made the making of it so worth it. It's getting its own separate post as I've never made one before and I love things in miniature and I just want to yak about it a bit.

He was holding a balloon when it flew away, and then wanted to release the others. I know that environmentally speaking we were naughty in letting this happen, but as they flew away he waved at each one and said "Bye bye, balloon!" and sometimes "Have a nice trip!" We were overcome by the cuteness, so fingers were crossed for whales and birds and other creatures we hope we didn't impact negatively. 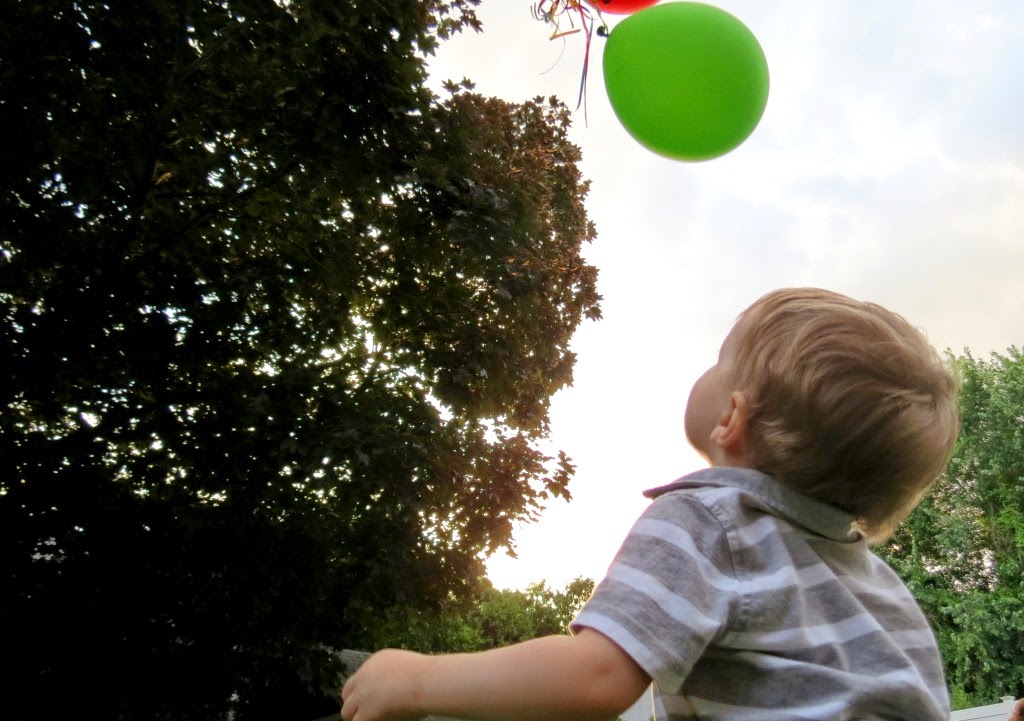 When I was little I used to hate letting balloons go. Not so a whale wouldn't choke on it if it landed in the sea, but because there was something so sad about it. I still feel that way, like a tiny bit of joy has flown away, unreachable, gone, never to come back. (Well, when you put it THAT way, Bee...) 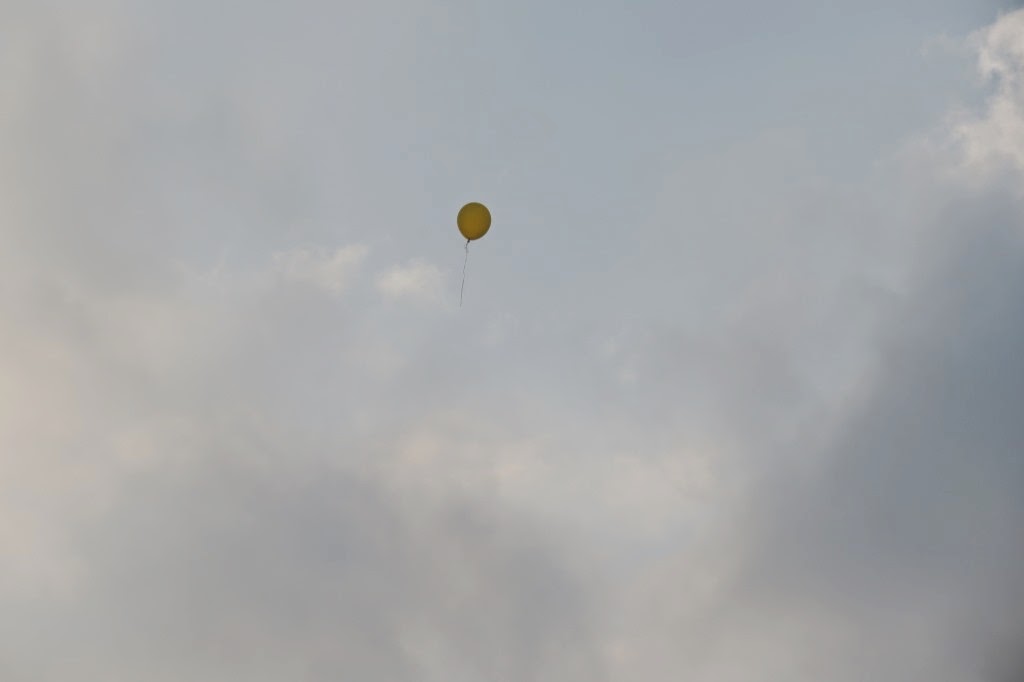 Ah, childhood. When nothing is sad, and everything is a joy, like discovering the boingy reaction that happens when you snap the clothesline-- 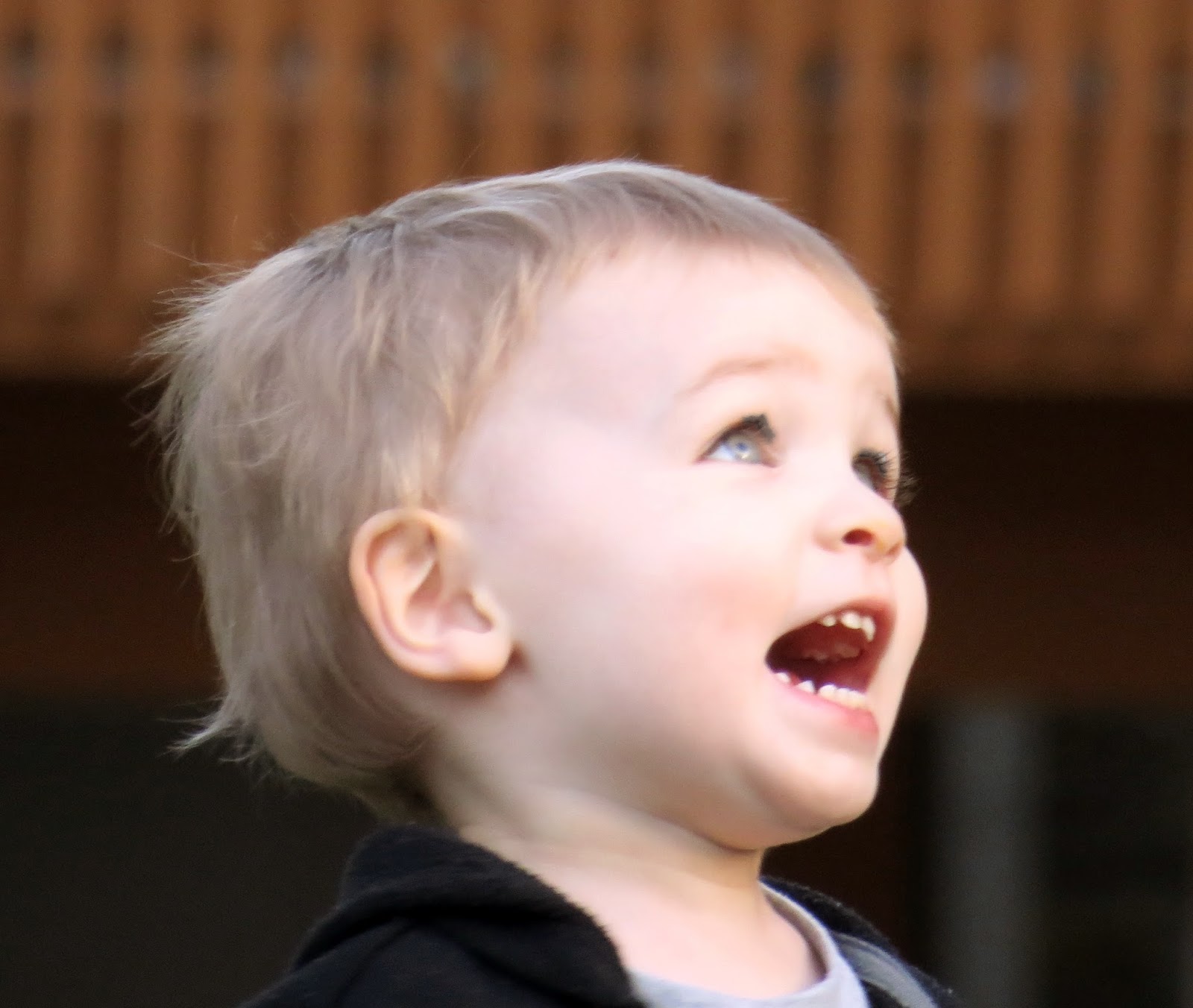 I took the babycakes inside to watch Peppa Pig and try to get him to nap a bit, but the others who have a hardier constitution and who can actually play racquet sports worked up a game of badminton. 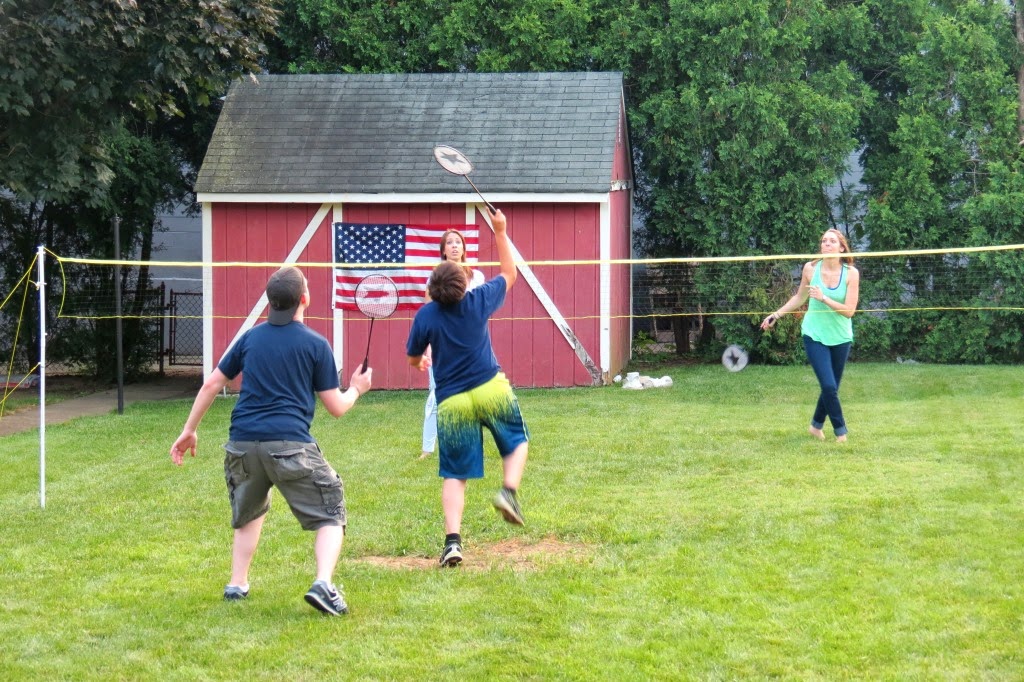 I would have played, but last weekend when I did play I was subjected to constant reminders of my ineptitude. That's OK, I'm fine with being the family seamstress. And I love snuggle time with the tot (and Peppa Pig) so I feel I got the better end of the deal...

So that's that. Later, taters!
From the convoluted brain of Bethany at 8:58 PM