I FINALLY Made a New Bag

Before I say another word, take a gander at tonight's sunset-- 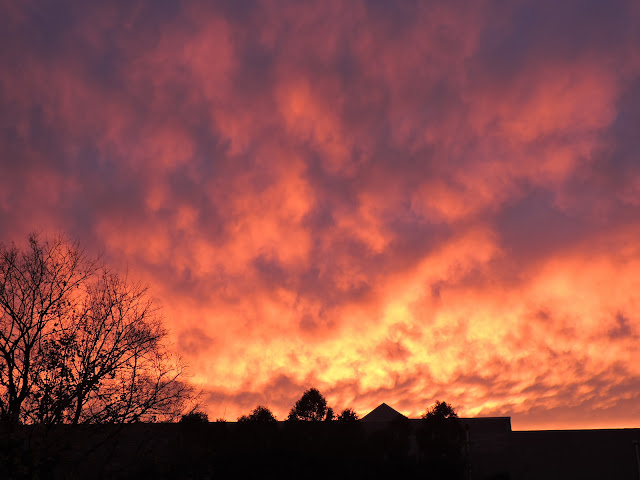 I know, people hate the early darkness. But I maintain there is no other time of year that God opens his paintbox and has his way with the sky on an almost daily basis. I look forward to it. I love it. 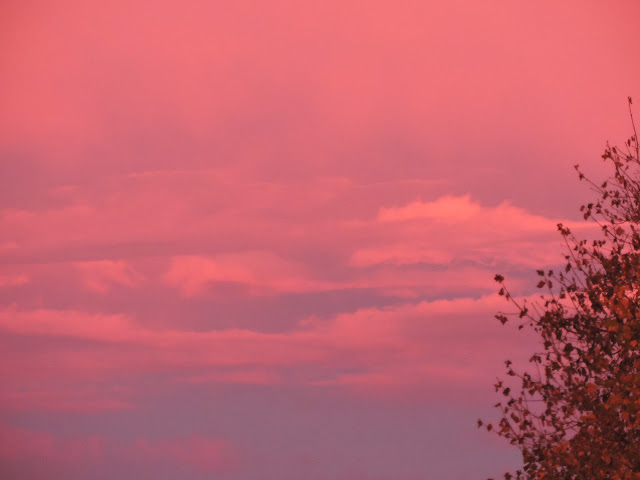 In the past month I think I've spent more time at the wheel of my sewing machine than in the entire year combined. My lack of sewing motivation was starting to concern me, but I feel that getting back into it through a few project requests from others got me back into the swing of things. Inspired by a bag repair I did for someone, I rolled out the gridded paper the other night and sketched myself a pattern. And now I've got myself a new bag! 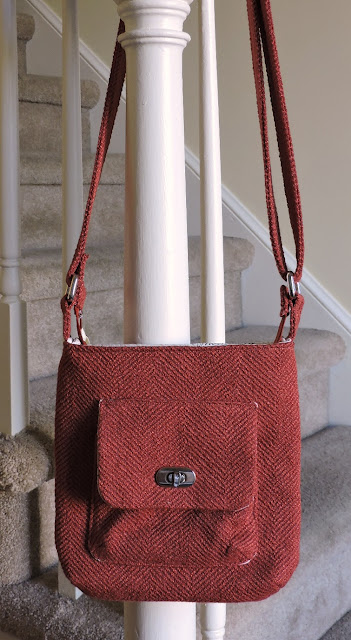 That fabric is home dec weight and was a bit of a beast to work with. I was originally excited because I wouldn't need interfacing, but I think I'd rather have used that and had an easier time of it. Especially when it came to the straps. I've never had an issue with my sewing machine sewing through some mighty layers, but this time it balked and said "Come on, lady! Get your head checked!" I wanted a fabric similar in color to the bag I have now, and this is kind of right on. 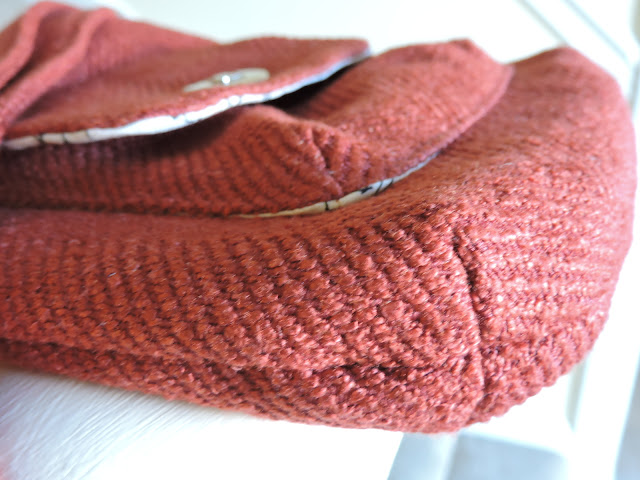 Instead of boxing the corners, I cut some slight curves and made darts instead--I love the soft shaping that it gives and the little bit of depth.

Last week I was shopping with my mother and she asked if I was going to lug my handbag with me. I thought she was silly and told her of course I was. And dang do I have a heavy handbag! No way I can make it through Christmas shopping and outings and such in an uncomfortable manner (which I had never noticed before). I wanted something for my phone, a little zip purse for cards and cash, keys, and a few essentials like eye drops and lipstick, etc. This is just exactly what I wanted. 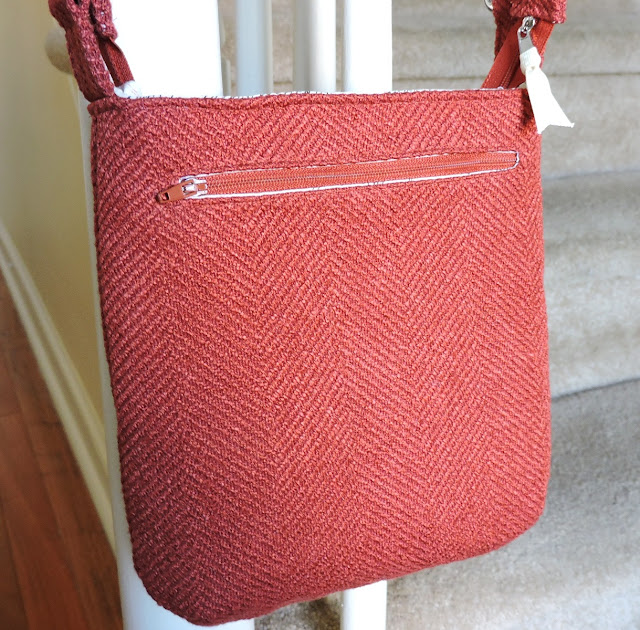 I was going to put such a zipper in the lining but I'm glad I didn't--the inside is a little small and might be tough to get to if the bag is full.

I have never used a twist lock in a bag before, and I think they might be my new favorite thing. Overall, it was very simple to insert. The only trouble I had was cutting the hole in the fabric just the right size--I started small and kept snipping until it was just right as I didn't want to hack away and have a hole the size of my fist. 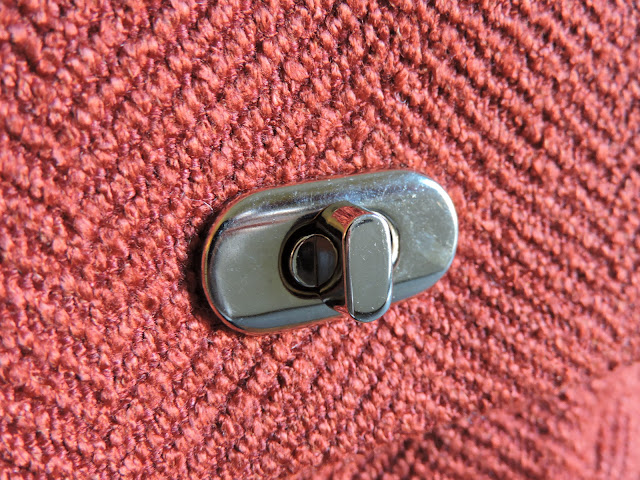 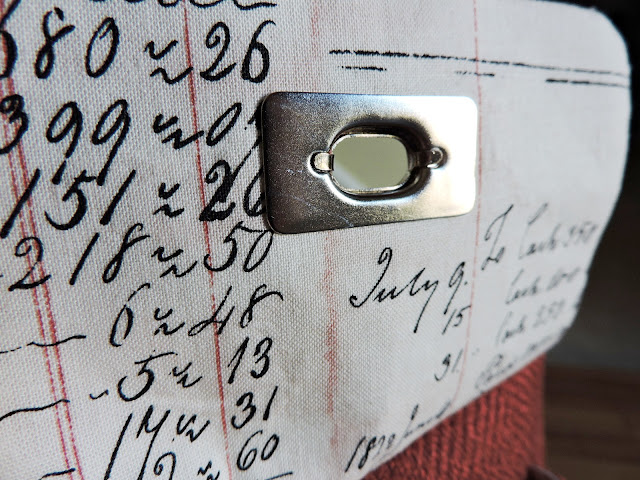 I had two of these in my stash. One I received as part of a little extra goody bag from an online shop, and the other was this one that came from...somewhere. I went with this one as the other one is nicer and I didn't want to ruin the nicer one if I was all bear paws about inserting it. So of course now I wish I could change it but I'll survive. 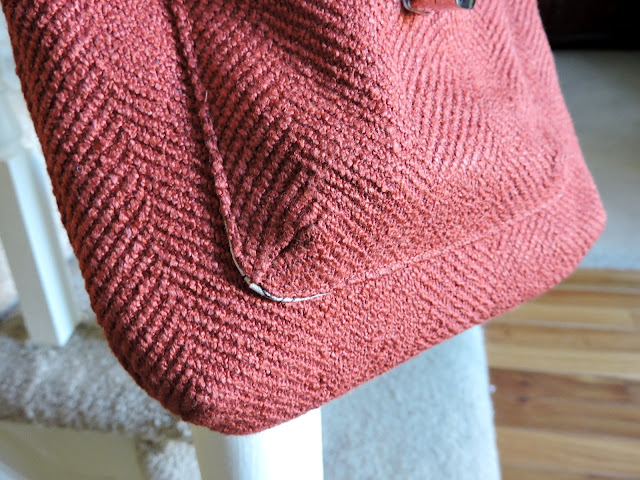 I darted the pocket but did struggle a bit with placement. It's not perfect but it's just fine for a first crack--it's not easy to keep the bottom straight, the pocket puffy, and the sides the right width for the flap when the pins want to have their say and my preferred clips are benched for the task at hand. See that bit of white from the lining pocket peeking out? Would that drive you nuts? I can't decide if it should. Part of me wants to find a marker and color it in. Another part wants to grab my rust-colored thread and hand-stitch in such a way that it covers it. Another part says leave it alone; it's still better than store-bought. 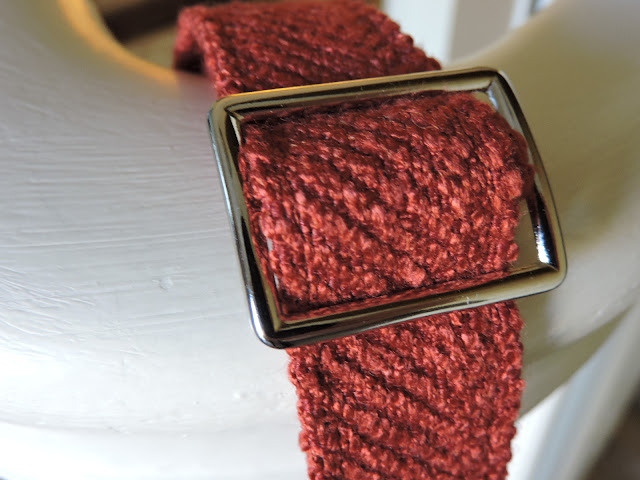 I made some adjustable straps and by jingo were they a chore! I actually made them three times before I not only got the size right, but also the overall thickness right for sewing them to the rings to be feasible. I could have just left a plain long strap, but I really like some twinkly hardware, so I had to add some. Little pleasures... 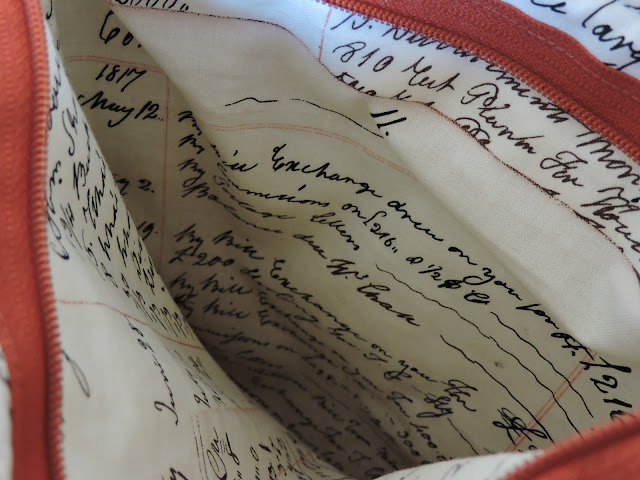 I used a bit of an old text print I had for the lining. It was just the right amount with some careful cutting (and crossed fingers for no mistakes). There are no zippers or pockets or anything, just a plain lining. I did take some time pondering the zipper. I normally make a casing and would have done so if I'd had enough of the lining (as I tried with the home dec stuff and it just wasn't happening). Since I didn't want a huge amount of depth at the top anyway, I simply stitched the zipper tape to the lining (you can just see it in the pic above). I wouldn't do it again this way (I'd make a casing), but this was a make-do moment. 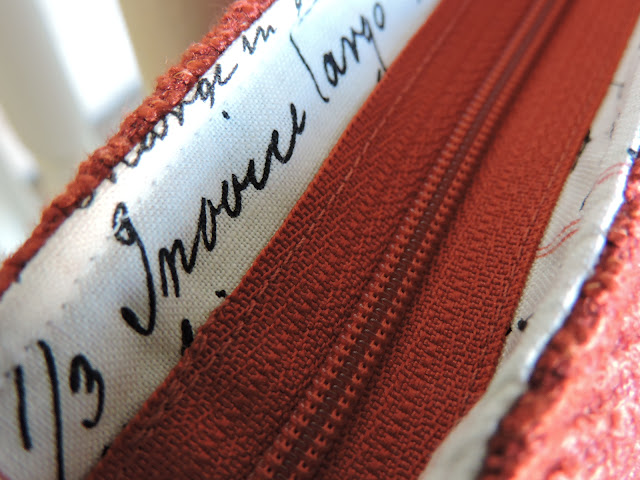 So that's that. Finished just in time for Christmas shopping. It's hanging off of a knob on the china cabinet right now, and it really is adorbs. So glad I didn't muck it up as I needed a successful sewing project that wasn't something I've made a gazillion of before.

Oh, and if some of you live in a place that is getting snow, give that old storm cloud my address, will ya?
From the convoluted brain of Bethany at 8:23 PM