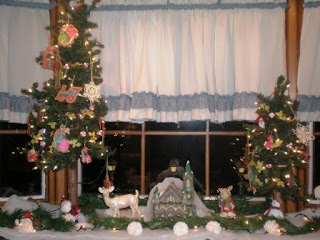 So it's pretty much zero hour and I'm done-done-done.  We don't really do presents or anything at my work but I get a few gifts each year, and this year they were especially amusing and thoughtful.  They're different from what typical work gifts seem to be so I thought I'd share them here.
First: 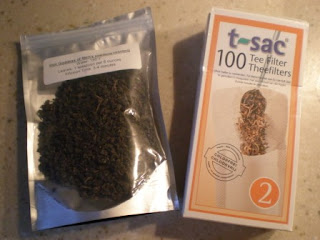 ...loose tea and tea filters.  I love tea, but I'm very 'meh' about what I drink.  Usually it's plain Tetley or green tea or something, and if I venture into flavors it's usually mint or something simple.  I tried camomille once and felt like I was tripping for the rest of the day.  So in the photo above we have some tea that I have to work for.  But the best part is the name of it (use your best wrestler voice when you say it): 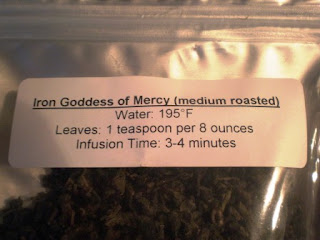 I have no clue why they named this tea such a thing, but it's highly amusing.  The smell would normally make me not want to drink it--it's very earthy, I guess is the word.  But the taste is very mild.  It's extremely yummy with honey in it.  And it has a nice little kick.  It was great on Saturday with all that snow dumping on us.
Next is from a guy in my department at work.  We're usually arguing or finding ways to annoy each other, but it's all in good fun (at least on my end it is--his might be malicious; haven't asked).  Anyway, he gave me a bag of yay!  First we have edibles: 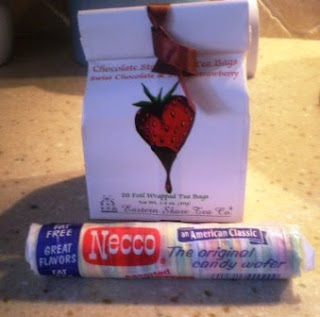 Necco wafers and strawberry chocolate tea.  Mmmmmm....there was more candy but it's working its way along my duodenum now (ew...intestinal humor...gross).  Then, there were these: 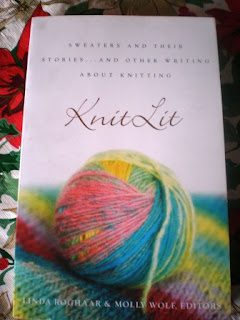 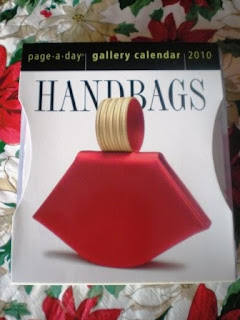 One is a book called "Knit Lit" and it's people's personal stories about why they knit, whether it be therapeutic, to carry on something a loved one who has died loved to do, or whatever.  Some of them sound like they might be sad, but some sounded funny too.  I think this is what I'm doing while I'm drinking my hot chocolate later.  The other is a desk calendar, all of designer handbags.  I didn't want to cheat and look at too many, so I only saw the first two, but I'm excited to see if there's anything I could copy in some way, or at least get some creative juices flowing with.
Moving on...my company let us out early today, so I went fabric shopping.  One of the blogs I follow mentioned Harris Tweeds, and showed some in luscious colors, so this put me in a very plaid wool sort of mood.  Once I get an idea in my head it needs fulfillment or I get very annoying (or even moreso) to those around me, so I needed wool in my hands before I could call it a day.  There were limited colors (none of the fun brights like Vivienne Westwood might use) but I found enough to sate my weirdo fabric desires.  I also found some tan corduroy and a great decorator fabric that matches perfecto. 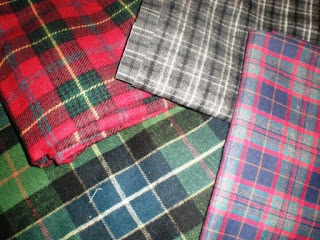 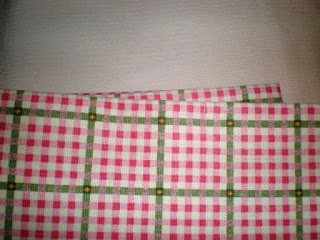 When I look at it this way it looks like I did Al Borland's laundry, but they'll be great bags when I'm done with them.  On the right you can't tell that the top one is corduroy but it is.
Now, it's story time.  Imagine, if you will, that you are a grown man, around 6 ft. 2, muscular, lift heavy weights, have a devil may care attitude, you know the type.  One morning, you are in your home when you hear a strange noise from upstairs. You go to investigate and see that a tiny bird has somehow found its way into your house and is flying around your son's bedroom.  What would you do?  Would you shut the door so it can't get out and then open a window and try to get it to fly out?  Seems obvious.  Would you be a total brute, and grab a broom to show it who's boss? If you chose this answer I hope I don't know you.  Or, would you let it fly by you into the house and spend the day trying to get it out?  The answer: none of the above.  Because I forgot to mention you have a ridiculous bird phobia.  So what actually happens is you run into the bathroom, lock the door, and call your parents' house to tell them you're not coming out of the bathroom until one of them comes and gets rid of the bird.  Good old Dad shows up and lets the bird out.  Like the last time a bird got in, and you ran across the street in boxers and socks in December to a restaurant pay phone with your neighborhood staring at you and called home frantically for help without explaining anything until help arrived.  It's a pretty big phobia.  And you're my brother.  The end.
Finally, a few of my observations for today:
1.  Who the hell ever really wants to say "Sister Susie sitting on a thistle?"
2.  If you don't live near or in Philadelphia, you're lucky--there's a bad driver convention today, and they're out and about showing their (lack of) skills.
3.  You CAN eat too many dougnuts.
4.  December 23rd is the longest day of the year.  Work-wise, of course. Even when you get out early.
5.  I need photography lessons.
Ta-ta for now.
From the convoluted brain of Bethany at 5:37 PM