Give me an old-fashioned Christmas.... 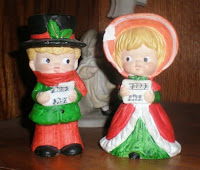 The shopping is done. The wrapping is done.  All that's left is picking out the tree.  This may be the earliest I've ever been pretty much finished.  My plan today was to curl up with hot chocolate and a book I've been itching to read--and the book sits there, untouched.  But I do have my hot chocolate now, and I'm sitting all cozy watching TV with all the Christmas lights on, and this oddly puts me in a writing mood.  I haven't added to my Christmas "series" anymore, so here goes part 2: really old stuff.


Some of the decorations around the house are so hold they look like they could fall apart at the slightest touch.  But they're the ones that must needs be put out every year, lest the masses whine... 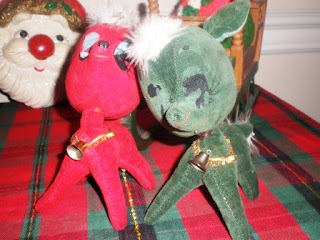 These creepy looking reindeer were once adorable, and were some of the first decorations my mother bought for her first Christmas on her own about @& years ago.  They used to be made of a soft, velvety fabric, but have been loved until the velvet nap has worn away.  There used to be normal eyes in place of those splotchy things, but they haven't shown up for years.  The best part?  They need to lean up against each other or their heads go wonky and flop over.  It's as though they're two old friends in the retirement years of Christmas decorations, and they help each other keep on keepin' on. 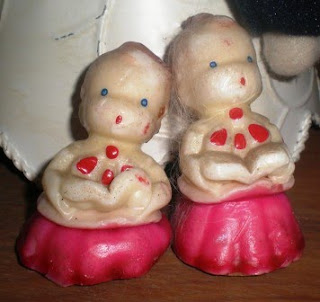 I suppose that, in the academic sense, these are still candles. They are made of wax. They react to heat (which is why they're a bit misshapen--they live in the attic for most of the year--it gets HOT up there).  Oh, and they have wicks on their heads.  These belonged to my great-grandmother, and were one of the things given to my father after she passed.  I was reading an issue of Reminisce magazine last year (the Christmas issue) and looking closely at one of the photos I spotted these same angels under the tree in the picture.  Except that theirs was part of a set.  There was a church-shaped package they came in, and there were about twelve pairs of candles inside; they were all different, but these were there too.  The photo was in color, so I'm going to say they're from some time in the fifties. I like two things about these: one is the little books they're holding.  The other is imagining my dad as a little boy, for some reason taken by a set of waxen choir angels, so much so that when he was an adult someone remembered that and passed them on.
UPDATE: Six pairs of angels.  Six grandkids.  Each got a set.  Ain't nothing nostalgic about it (I learned this over Christmas vacation).  BUT it did inspire my aunt to show her kids they had the same little doo-dads hanging around). 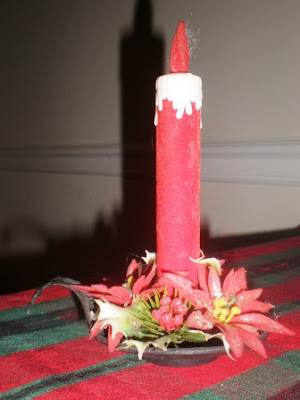 This one comes with a geek reveal, the geek being me, of course.  When my grandma passed some years ago, we were going through her things and giving out decorations.  These went to my mother for some reason.  They're very unsubstantial.  They're made of foam, plastic, and felt, but there's something so old-school Christmassy about them that I just love them.  Reveal:  when I was young and we were watching Christmas movies, they always seemed to be set in a time when there were no electric lights and everyone carried around candles and candlesticks.  My parents had a decorative set of candleholders, and I used to ask my mom to let me carry a candle around at night because it would save electricity if I needed to go to the bathroom or something (I also wanted to wear a sleeping cap--I was an odd one).  I realize now that a kid with matches at night would NOT have been a smart thing.  By the time she got these I was almost seventeen and way too old to be doing such things.  But a part of me wanted to be young enough to be whimsical and play Victorian Christmas without my parents shaking their heads and wondering what was wrong with their child. 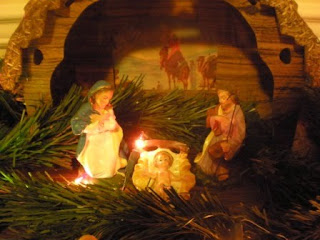 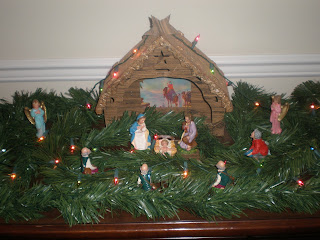 This nativity set goes back over eighty years. It belonged to my great-grandfather.  A few years ago, again while reading Reminisce, I noticed some of these same pieces.  The person writing about them said that her parents bought them in the twenties--it seemed quite a splurge at the time, but right now would cost pocket change.  They cost twenty-seven cents per piece then; when you turn them over you can still see the price stamped on the bottom.  There were different styles of each piece available, so it was a mix-and-match set.  There's the Holy Family, a few angels, what I assume are shepherds, and a cardboard barn.  They have held up surprisingly well over the decades, and the only thing that shows any more wear is the barn.  I remember visiting his house and being fascinated by this when I was a tot--our nativity only had three people, and they were glued down. 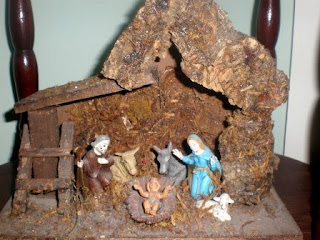 This one (my parents') was bought some time in the seventies, I believe.  It's very simple, and very rustic, and still gets put out each and every year.  It doesn't get the lights strung around it, but it gets placed in the foyer.  I guess it's really all that's necessary for a creche.  But how do you play dollhouse-style manger scene without movable characters? 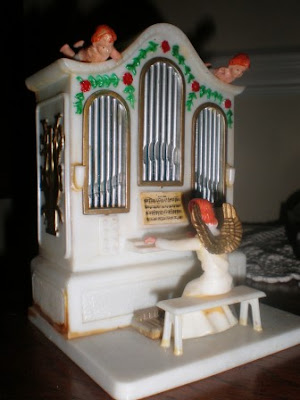 THIS was always one of my favorites.  This belonged to my grandparents, and they used to put it out every year, simply placed on the end table in their living room.  It's a plastic music box that plays 'Silent Night' when wound up; the angel plays the pipe organ, and what were once two angels peer down from above.  Right now they're more like Venus-de-Milos with heads....and toga diapers.  But they used to have wings. And arms.  I have no idea when this is from, but I do remember going to their house and laying on the living floor with it in front of me, listening to it play.  And then starting it all over again when it wound down.
I think these things were fascinating to me because they were unlike anything in our house, for the most part, and they weren't like anything that you'd see in stores.  It marks an interesting transition--when my grandparents and their parents before them were selecting Christmas decorations, there was more of a religious aspect to the choices.  As time moved on, things became more secular, and it appears that they've stayed that way.  I don't mean to be all Jesus-is-the-reason about it, but I feel like Christmas was perhaps a more joyful time when people were mindful of its beginnings and less focused on commercialism.  I certainly think that something has been lost, and I'm glad I have these little reminders of times gone by and the way things were.
From the convoluted brain of Bethany at 11:14 PM