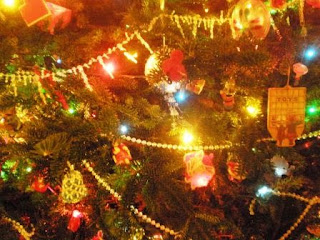 I like how this picture came out warm and fuzzy looking.  The tree this year ended up being a Frasier Fir (it's usually a Douglas Fir).  Frasiers are by nature sturdy things with fragrant branches that are pretty strong, as opposed to Dougie who doesn't really have strong branches but is nice and fragrant.  They're usually much larger than the Frasier, though, and this presents a problem to people who have ornaments from the beginning of time.  Because the tree is usually very Griswold-y in size, every ornament gets a place.  But this year, due to space restrictions, my sister decided there should be a theme, and that theme should be "tacky."  Which means none of those fancy dated balls that go back forty years and are usually the ones that fall off the tree and roll across the floor.  The rest of the stuff isn't necessarily tacky; it's just very eclectic.  So that's what's on the tree this year, and I think it's my favorite tree we've ever had.  Most of these things are pretty old, and at this point it should go without saying that I love them mostest (but I decided to say it anyway).  I don't know where to start so I'm going in the order I went around the tree... 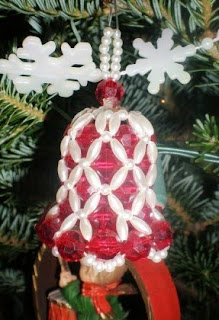 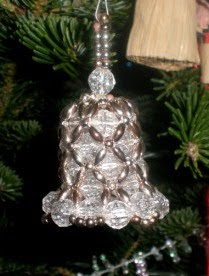 A set of these came to live with us in between my two sisters being born, so we have six instead of eight.  They're beaded bells and there's not much more to say. One of my dad's aunts that I don't remember ever meeting made them and shipped them to us one year.  They sparkle beautifully (but the stupid camera kept fighting me in getting a shot of it).  They're some of the first ones that go up. 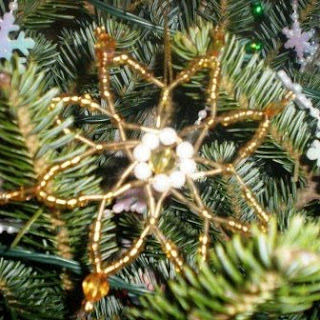 I shan't lie--this is a terrible picture of a really pretty snowflake.  However, it was a devilish beast to make.  My sister bought a set of beads and wire to string together a few little package toppers; about halfway through she was wondering if she was mentally defective.  Turns out the instructions weren't so hot (go figure--thanks translator guy from China).  Anyway, by the time we figured out the dillio, we had practically cut our fingers off tightening the wire around the beads, had achy necks for a few days, and probably advanced our near-sightedness.  The end result was pretty....there were vows involved to never ever attempt this again. 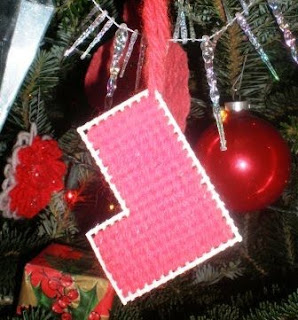 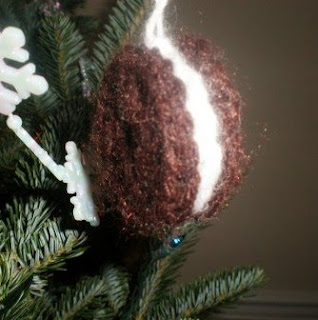 At this point you should know there is yarn involved somehow.

See that stocking?  It's one of those plastic canvassy things with red yarn cross-stitched.  There used to be cotton at the top but it went bye-bye long ago.  We made these at a Girl Scouts Christmas sleepover when I was about 8.  We had the option of using red marker on it and coloring it in, or stitching with red yarn.  I was the only one who finished mine with yarn (and that is an exact quote of what I say each year when I hang it up--to a reply of "We KNOW.  Sheesh! You say that EVery year!").  Most girls did a few rows and called it quits--but my affinity for unhalf-assed stuff made me keep plugging away.  That other one up there is an Oreo ornament.  I'm not sure if that's abundantly clear, but that was the intent.  I don't know who made these, but it was someone from my father's side because they have these on their tree, too. 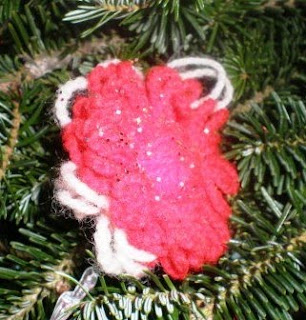 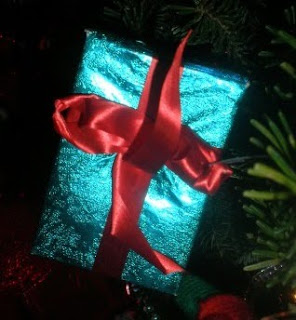 Making do with making it.

I wonder if everyone has little bits like this around from their first Christmas in their own place that they hang up decades later, providing early memories for future generations.  My mom's first Christmas on her own she made her ornaments.  I'm not sure how she did those on the left (and she doesn't remember) but they look like red and white flowers with glitter sprinkled on them.  Purdy.  And one day I shall have small boxes wrapped in paper scraps and tied with leftover ribbon to hang on my tree. 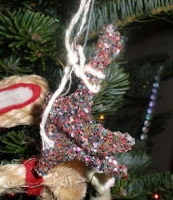 "Why, yes the kids made it. How could you tell?"

I used to be jealous that this lifesaver man wasn't something I had made in MY preschool class (because I love kitsch, and I suppose I wanted to be the provider of it, even then).  I am always tempted to perform an autopsy to see just what those life savers have been up to after 30 years, but that would mean ruining the first Christmas present my mom got from her kids (my brother having made this in school).  He, or it, loses a little of its luster each year, but he's still fun.  That blob of something on the right is glue.  Literally.  Another preschool masterpiece. From my brother. Side note: when I was in preschool the ornament I made was a piece of felt with my initials on it. Oooo, snazzy.   Anyway, this used to be in the shape of something.  I think what they did was squirt glue on wax paper and sprinkle glitter on it.  After ages of the dry attic, this is all that's left of it.  And I used to scoff at the paper stocking someone made that gets hung out of sentimentality...but in my crafty knowledge years I can now say "Well, why WOULDn't you hang a Fair Isle styled stocking on the tree, construction paper or otherwise?" 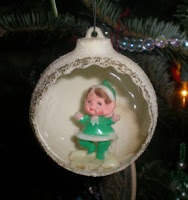 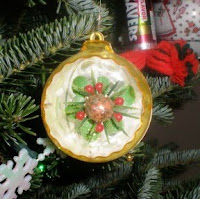 Once upon a time, in Christmasland, someone came up with the idea of the year--putting an ornament inside an ornament.  We have tons of these little guys on the left in various forms--Santas, angels, snowmen, etc.  And on the right we have several little plastic scenes instead a hunk of plastic.  They're all pretty old--some are religious, some aren't...they remind me of those Easter eggs that are made out of sugar and have a little peephole with an Easter scene inside. 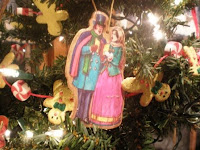 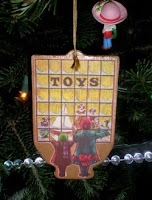 These would have been right up my alley...

My dad's brother made these for him I know not when, but it's not like it was recent, lol.  They're basic woodcuts, and the shapes are stickers or decals or something cut to fit.  But the best part is that they're two-sided--when they're turned around you see them from the other side.  There's a set of about two dozen, and we used to fight over who was going to inherit them. 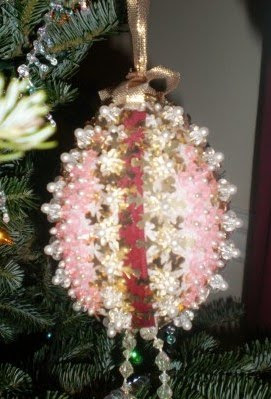 This is where Frasier-strength branches come in handy.

Every Sunday my aunt would take my brother and me to Woodhaven Mall.  He got money for pizza and the arcade, while we shopped for important things like books, stickers, and craft supplies.  Remember Gaudio's?  They went out of business--which is pretty surprising because she dropped enough money there to keep them IN business (a service I try to provide to Joann Fabrics).  But we were in there every week searching for beads and trimmings.  One year, she found the leftover beads from when she and my grandmother made my mom's wedding dress and hand-beaded the train.  The beads on this ball (a piece of styrofoam) are from that dress, with little snowflake sequins.  I'm not sure where the pink and maroon color scheme came from, but my mom calls this her wedding ball.  We made similar ones (without nostalgic beads) for my grandmothers.  They catch the tree lights nicely, but they need a strong branch. 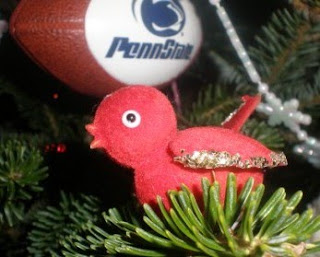 One of my mom's favorites and one of my dad's...guess which is whose?  That cheery little warbler has a clip on the bottom that clips onto a branch so that it sits on the tree instead of hanging fom it.  They're (we have 2) very fragile in their old age, but aside from that none the worse for wear.  And, coincidentally my dad's fave ornanent hangs in the background (my mom told me to crop it out but I like it). 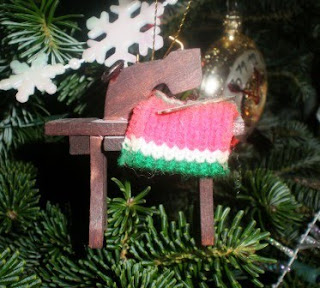 I'm ending on this one, my favorite.  We found this last Christmas when we were going through a box of ornaments we had neglected to peruse in previous years.  It's a simple wooden sewing machine, with fabric (that's knitted out of yarn) and a pair of tiny scissors.  This belonged to mother's mother, a seamstress by trade and by hobby.  My mom always says the crafty gene must skip a generation, because she didn't get it, and I seem to get it from both my grandmothers as far as sewing, knitting and crocheting go.  Anyway, we pulled it out of the box and my mom goes "Here...I think this is for you."

That's about it.  Here are a few things I've realized while writing this:
1. I think the George C. Scott version of "A Christmas Carol is my favorite."
2. The movie "Prancer" is pretty cute.
3. I didn't find my Bethany ornament this year.  Having a bit of an odd name meant I never found keychains, pencils, or anything else with my name on it.  Trust me--this was disappointing.  A few years ago, I was shopping and saw a cutesy snowgirl ornament (pink! at that) with Bethany written across it.  I became very excited and plunked down my money.  I hope I find it because I've searched every box, every drawer, every everything to find it and it seems to be gone.
4. My favorite part of "A Christmas Story" is when Ralphie beats up Scut Farkus (always thought his name was Scott, but then I read the book and learned it's Scut).
5. This post is really long and I'm going to shut up now.
From the convoluted brain of Bethany at 11:38 PM