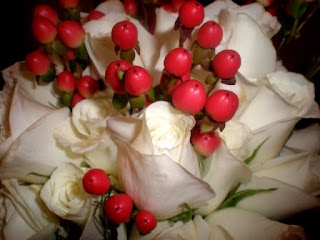 More on actual decorations later this week...
I was in a Christmas-themed wedding yesterday (close-up of our flowers).  Since I didn't really feel like doing much of anything today, I went shopping.  And, for $8.00 at Target, bought something I've always wanted... 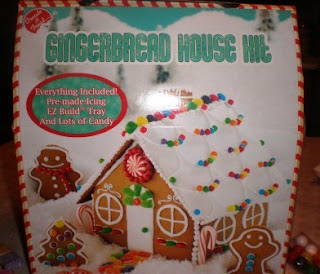 Every year we'd ask my mom for a gingerbread house, and every year she said no, and had some kind of excuse that they were messy, or were made of old ingredients.  Today I learned the real reason.
Now, this just isn't any gingerbread house.  It's practically done. It's the not-very-adept-at-candy-houses version.  Right next to it was the pull-it-straight-out-of-the-box-finished version (which is probably better suited to my skills).  With this one, everything was included: the cookie walls, a tray to make it stand up straight so you don't have to figure it out, a bag of icing, and lots of candy.  The 'lots of candy' part is a big fat lie.  I recruited helpers (my much-better-at-this-sort-of-thing sister, and my nephew, who just wanted to eat it), and set to work. Two minutes later the kid is in the other room playing video games. 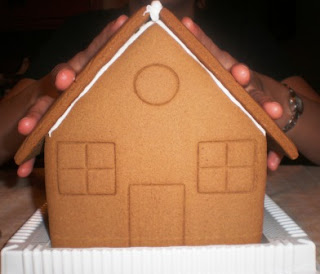 This stuff is like the black hole of decorative substances--anything that gets near it gets stuck, never to be released again.
It starts off by having you make the walls stick up in this tray while you add the roof.  Easy enough.  Then you're supposed to wait a few while the icing sets.  Once that's good to go, we decided to start on the little candy wreath thingees and the gumball roofline...so far so good. Looks kind of cute. 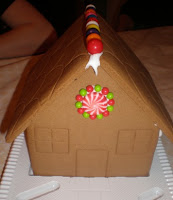 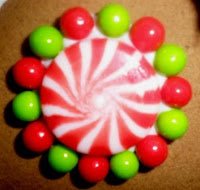 I'm a sucker for things made out of candy...see what I did there?
Sucker? Candy?  Anybody? Whatever....
Then, you're supposed to continue with intricate icing details and creative placement of candy bits.  Here's something I learned: royal icing is nowhere near as cooperative as Martha Stewart makes it seem to be.  No matter how hard you try, it comes out in a really thick, gooey line that refuses to have any delicacy about it whatsoever.  So it's a really good thing I wasn't the icer. I got to be the candy placer.  My sister had a claw hand after a bit from all of the muscle action she was asking of her hands, but she did swell. 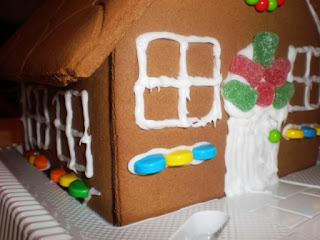 These things are supposed to be sloppy, but she had a picture of perfection in her head. I think it looks fab-o. 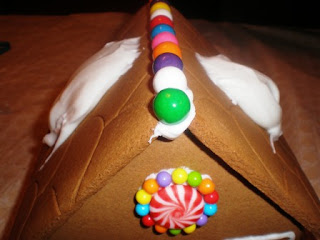 By the time we got to the roof, we were a bit frustrated, so we just slapped that stuff on and spread it with a butter knife.
Not much later we ended up with this little gem of a thing: 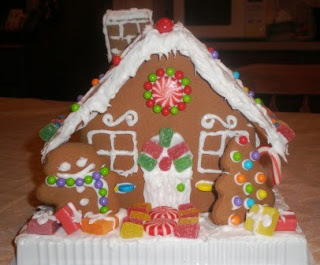 It's in move-in condition.  Here's a secret--when I was a wee tot, I always wanted to live in unrealistic places.  At Storybook Land, I wanted to live with Peter the Pumpkin Eater's Wife in her little cozy pumpkin.  I wished I could have been transported into a ViewMaster because it was a totally unreal but at the same time real 3-D world inside. And I certainly wanted to live inside a gingerbread house.  This one is not architecturally sound, but it looks fun.  Here are a few more views: 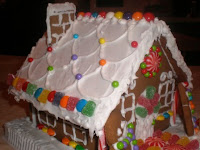 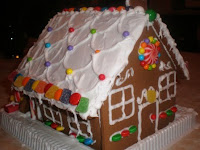 Here's where you can see where the lots-of-candy statement doesn't exactly equate to "enough candy to complete this project as shown."  But we had oodles of fun, and it came out looking not too terrible.  We also developed a profound understanding of why my mother never bought one of these for the four of us.
I'm off to alter a dress for my sister. Fun.
From the convoluted brain of Bethany at 9:24 PM