When I was a kid we MADE our decorations walking uphill in the snow...

I am so thankful to be sitting for five minutes.  My sewing teacher decided to have a "sew-in" today, which is where you go and sew whatever you want, all day long (or however long you want).  I didn't have last-minute Christmas projects to finish up the way a lot of people did, but it was a nice day out (if you don't count the goofs I made and the air I turned blue with cursing).  Plus there were munchies galore--and heaven knows I can't do much if I can't eat while I'm doing it.  Anyway, I have a few minutes before I have to go make some chocolate-covered yumminess, so I'm continuing my "series" with an investigation into handmade Christmas decorations. 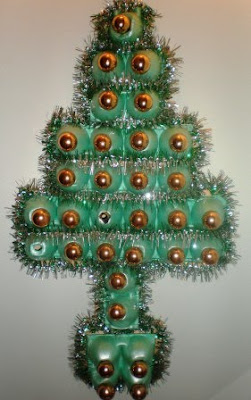 I'm pretty sure this is a million years old.  My dad's grandfather made him and my mom a set of these when they were first married (the other one is pink with red shiny balls--I snorted a little when I wrote that...out of maturity).  It's pretty much an egg carton cut apart and stapled to a piece of posterboard, with garland and gold balls glued to it.  But, like all of the really old stuff, I lurve it.  It doesn't really go with the rest of everything else (regardless of this blog, a lot of the Christmas stuff is fairly new and non-tacky) but we have to put it out every year.  Everything handmade deserves a spot somewhere, especially something made with someone specific in mind.  Some bally-hooer decided to pinch the balls until they popped (tee-hee), but I think it will still be around every year until it biodegrades. 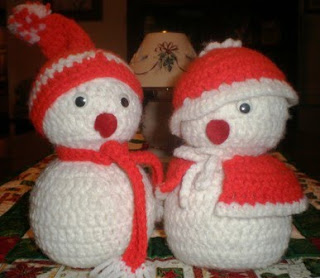 This handsome couple was made by I know not whom (definitely a grandma, though).  They're the typical granny-craft of plain yarn, styrofoam balls and googly eyes.  SHE has a freakiness factor--her hat fell off once and I saw she only has one eye.  I seem to remember that being traumatic but I'm not sure if that's really true. They're the village elders of the snowman-devoted windowsill in the dining room.  It's a big windowsill.
It seems that if you weren't crocheting in the seventies, you were enrolled in a ceramics class. 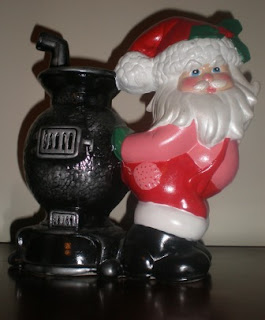 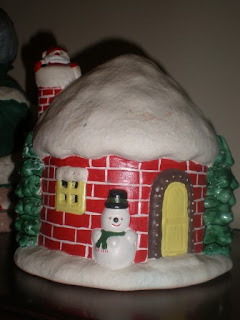 OK, I admit, the Santa with his tush on the stove was made by me...in the '90s and NOT the '70s but that's an unnecessary detail.  It used to have a specialty lightbulb inside that flickered and looked like an actual flame, but that's long gone.  And, it's not technically ceramics, as it's made of plaster and not fired in a kiln or anything.  BUT the one on the right WAS made in the seventies, and it IS ceramic and kiln-fired.  But it doesn't have a nifty lightbulb--just a plain old regular bulb, so there.  I feel I should throw out there that I wanted to live in this house when I was younger.  It would have been right next door to my gingerbread house, lol. 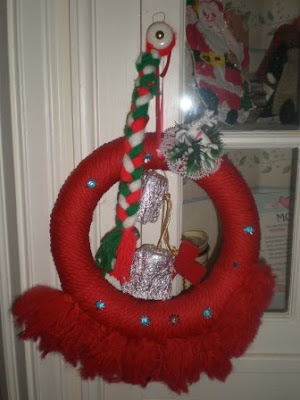 This here is a testament to the insanity of my second grade teacher Mrs. Gaskin.  Only as an adult did I realize that only a first year teacher would think it was a good idea to give 30 seven year old kids a styrofoam hoop, miles of yarn, and then tell them to wrap the yarn around the hoop and make a wreath.  I'm surprised she didn't go postal because that was one hot mess of an afternoon, let me tell you.  My mom told me to "brighten it up" with some beads. So I chose turquoise, the obvious choice for Christmas.  Those silvery things are styrofoam cups covered in aluminum foil and transformed into bells. My brother made those in cub scouts.  And the other thing is braided yarn.  This is clearly the section to display "crap my kids made that I need to display so I don't hurt their feelings but really isn't too good looking." 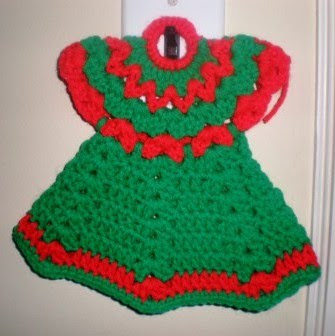 Obviously plain acrylic yarn was used widely by my ancestors...we have another one of these with the red and green reversed.   They hang on light switches that for some reason don't operate any lights but are still around.  If you search on the net there are a ton of patterns for whatever that is supposed to be--a dress, an angel, who knows. But my grandma made these at some point and we found them when we were going through her things.  They have no true sentimental value other than that their creator is on another plane of existence, and this little crafty remnant of their being reminds us that someone was once here, and while they were, they crocheted. 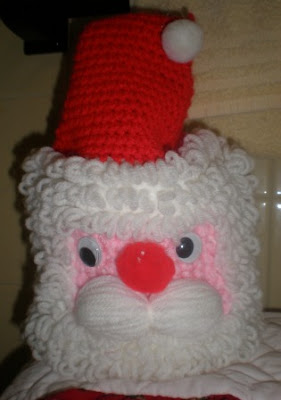 And last but not least, this...this.  No idea where it came from, but it's scary as the dickens.  It was crocheted.  There's a lot of yarn involved. It covers toilet paper, toilet paper being such an assault to the eyes and everything. And it has googly eyes that look in different directions.  It doesn't really look like Santa, or any other homonid...but it's amusing, and a great way to end the handmade section:  "Did you make that? I can tell!" (which no crafter ever really wants to hear, lol).
Well, kids, the tree is up and decorated and there's a theme to it this year.  So as soon as I can snap some pics we'll continue with the "fun." Well, I'm enjoying it anyway.  Memories be fun.
Off to dip stuff in chocolate and make a mess!
From the convoluted brain of Bethany at 8:13 PM