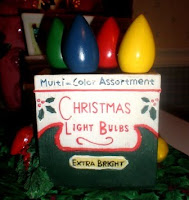 HA!! I bet you all thought I punched the keyboard and called it a title.  It actually means Christmas...thingees...in Yiddish...which, I don't know why they have a Yiddish word for Christmas, but I like the word tschotskes so I thought I'd go whole hog.  Not sure why I went with Yiddish since I'm not Jewish, but I digress.  Anyway, I thought I'd kick off my Christmas memory extravaganza with those little odd bits that have an unknown origin and may have a bit of tackiness about them but are still fun, mostly because they have been around for an eternity. 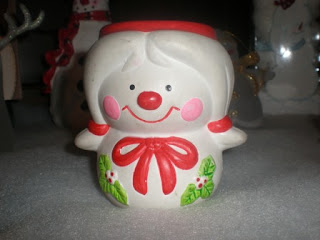 ...this cute little lady who stymies me as to what she is actually supposed to be.  She has been around as long as I can remember, and she's always been one of my favorites.  I think I was originally hooked by her little pink cheeks and the holly she's "wearing."  I don't know if she's supposed to be a person of some sort, or a snowwoman, or what...but I heart her. 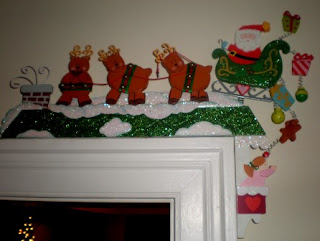 ....from an Avon catalog a few years ago.  There's nothing spectacular about it, but you know the best part? It's covered in glitter.  And I've never actually seen a decoration made for a doorframe.  It speaks to the tacky in me.  I know it's not as old as the other stuff, but it is definitely a tschotske, so it fits.

Leon and Len are friends.

Take a ride on the Christmas soooouuuuul train.

I can never find my name in magnetic wooden letters.
The train is another thing that goes way back to God knows when.  And since the same time, we've been making it say Leon instead of Noel.  My brother and I were convinced that we were two of the wittiest individuals ever when we hooked it up backwards.  And my mother would fix it, and we would refix it, and so it went.  When I was about ten I desperately needed a paint-by-number set of magnetic wooden Christmas ornaments.  I thought I was so precise and careful, and that these were true works of art.  If you zoom in, you can see they're a total hot mess.  Actually, you don't really need to zoom.  At some point, the 'O' ran for the exit, but they all still need to go up.  A few people still say
From the convoluted brain of Bethany at 9:03 PM