Do you realize in six more weeks we'll be halfway through the year already? That's crazy town. That can't be real. That also means my youngest nephew will have been here for a year. I mean....geez. What the hell?

This was a bit of an off week. Mentally I was very preoccupied. Nutritionally I ate a lot of doughnuts. Emotionally I fired off an angry email to a web-store that I have finally had it with. And creatively I made a bag. But I mucked it up from the get-go and had to finagle a work-around. I'll show you as soon as I get some pictures. Speaking of pictures, I have one photo for you this week. Skimpy, I know. But it's a good one. 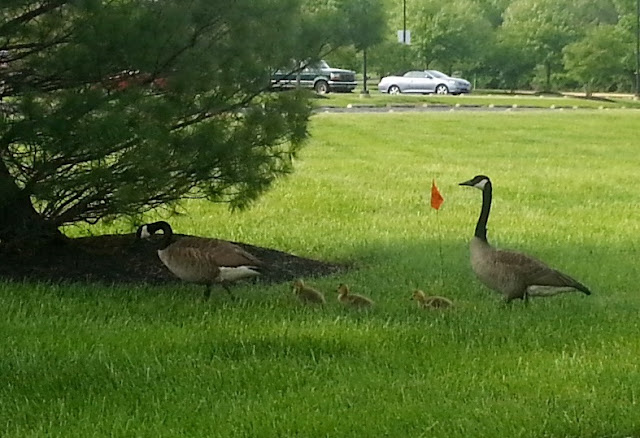 The fake swans they have in the retention pond at work are meant to scare off the geese. It's been working for the most part, except for these two. My boss figured they must have laid some eggs they weren't going to leave behind, and it turns out he was right. I think the little orange flag marks where a sprinkler head is, but from this angle I like that the third gosling looks like he's carrying it.

I'm hoping next week is a bit more inspiring, and that my eyes are more focused outward instead of moodily dwelling on things that one cannot change. Cheerio!
From the convoluted brain of Bethany at 11:05 PM