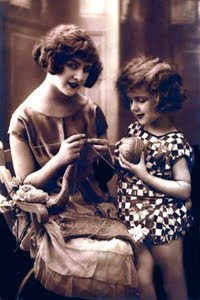 Do you ever forget that you know how to do something? Before I learned how to sew my method of getting pants that were too long to fit properly was to try and shrink them.  After I had learned to sew a bit I was getting ready to employ that method again when it struck me that "Hey! I can just HEM them now!"  I was blog-browsing today when I saw a beautiful photo of a bowl of various yarns.  I sighed in my head and started thinking "Wouldn't it be nice to know..." when I interrupted myself and remember that I do indeed know how to knit.  I think I forgot because I've been so extremely engrossed in sewing lately that I haven't done any of either.  How could I forget such a thing?

Both of my grandmothers were handy with needles, thread and yarn--my mother and several of my aunts proclaim that these genes skipped them and crash-landed in me.  I remember going to the store with my mother to look at yarn because my grandma had asked her to pick some up for her, digging through the bins and trying to match all the dye lot numbers.  I was always curious to know just how you get a long continuous string to be something usable.  But I never asked to know, and it was never offered, so I grew up surrounded by magic markers and construction paper, and with my nose buried in books.  After my maternal grandmother passed, I started paying a bit more attention to the things that she had made, and when her sister (my mother's aunt) passed some years later I realized that I knew very few people (one, to be exact) who knew how to knit, crochet, or sew.  I felt these things my relatives had done so lovingly needed to still be done.  So about seven years ago I decided I wanted to learn these things.  I asked for a learn-to-knit kit for Christmas.  I cast on my first stitch...and stopped.  I just couldn't get my head wrapped around the instructions.  I could not get beyond that one loop.  Talk about frustrating.  Luckily we were trekking across the state to see my other grandma--who knew how to knit and said she'd teach me.

After driving what seemed like forever I was chomping at the bit like a two year old on a sugar high, I was so ready to get started.  She told me "If you wait until after dinner I'll teach you."  After things quieted down I sat next to my grandma and the lesson commenced.  She showed me a much easier way to cast on than what I was doing.  But no matter what I just could not get the hang of it.  There were many times I'm surprised she didn't push me off the chair and tell me to go sit in the corner until I learned to pay attention (although that WOULD have been surprising if she had done that because that is so not my grandma).  Eventually I got it--like many things you just have to find that rhythm.  After that knitting was easy.  My very first project was a dishcloth.  Well....it was intended to be a dishcloth and by the time I was done that was all you would really want to use it for because it did not look good. I had dropped a stitch somewhere.  The cotton yarn plies separated easily, and so I would make two stitches out of one.  I knitted so tightly my fingers turned red and were a little swollen.  But I soldiered on, until I had added stitches and then decreased them so many times that I was getting nowhere. I asked my grandma if I was allowed to just bind everything off and have a big diagonal corner and she told me "It's your project.  You can do whatever you want."  So I did. It was a dishcloth only a mother could love--that's exactly who received it, consequently.  I have made countless dishcloths since then--they sell well and they're easy. 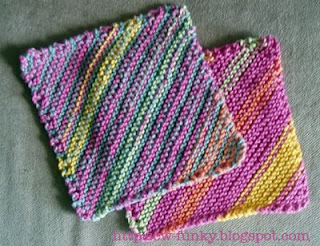 This is the pattern I make the most--I once saw it online called "Grandma's Dishcloth," and I thought "Yeah it is!"  It's super-easy and looks more difficult to do than it actually is.
(NOTE: Not my photo--I found it on the 'Sew Funky' blog).
I read somewhere that the first thing you knit is all you'll ever make, so it shouldn't be something like scarves. I say boo to that.  OK, most of what I knit does happen to be dishcloths, but I use many different stitch patterns, and I have tried many other things.  I've made a few sweaters that were ok, but nothing wonderful.  Or even very good (I've since learned that this may be because I didn't block them--major party foul on my part).  Same thing with socks--I thought it would be awesome to make socks.  But my fingers are a little too clumsy for some of the intricacies of socks.  I like my knitting to be soothing, but I also like quick projects since I'm always excited to move on to the next thing.  So I stick with mittens, hats, scarves, and dishcloths--I can make them well enough that they'll be used frequently, they're not expensive to make, and I can toss the work-in-progress in my purse and go.  But I do have serious knit envy when I see pictures of gorgeous hand-knit sweaters.  Maybe one day when I have more patience...

I have a hard time sitting still ever since I learned to knit, because crochet followed, then cross-stitch, and now sewing.  I am never bored and always have something to do.  I almost never watch movies that come with my sister's caveat "You really can't knit or you'll miss something."  I've tried to get people interested in knitting ever since then, but it's still too often associated with being a granny-craft (I'm still not sure why that's a bad thing).  I'm happy when I read that knitting is this trendy, underground thing that's happening now amongst the younger generations.  It's not necessary to knit, for the most part--which is part of why it's so relaxing (when it's work it loses its appeal).  The yarns that are available come in gorgeous colors and beautiful textures--I sometimes want to just wind balls of yarn and put them in a basket as a decoration.  I don't think anything says "warmth" on so many levels--the warmth a knitted item can bring physically, but also warm memories of sitting at my grandma's side, chewing my lower lip, and trying to keep a row of pesky loops from falling off of my needle.

I guess my point (you should know by now I'm long-winded when it comes to making points) is that if you want to know something, learn it. Find someone who can teach you.  Take lessons.  Or, if necessary, scour the internet.  There is so much information available to us as crafters that there is no good reason we can't learn something.  I'm just glad I realized how much I'd appreciate a granny craft being taught to me by my granny before it was too late.
From the convoluted brain of Bethany at 8:32 PM