Globetrekkin' to Asia (but not really)

I wanted to share the final two skirts I'm entering in the crafterhous Skirt Week contest.  I almost HAD to bend my sister's thumb back to get her to slip these on for me. 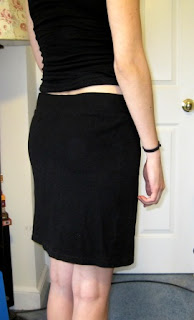 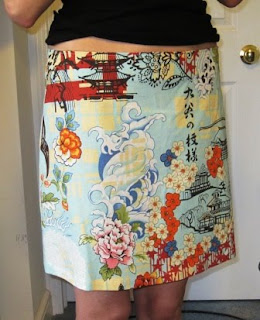 They're both straight skirts, but one is  a cotton woven and the other is a cotton knit.
The one on the left is the result of my first sewing-without-a-pattern ordeal.  My youngest sister has a knack for seeing things somewhere and wanting them replicated exactly.  She was watching Globetrekker (I think) and wanted a straight black cotton skirt, but without an elastic or drawstring waistband.  I was sewing approximately 3 months when she asked for this and had zero knowledge of body measurements and curves and proportions.  I hacked away (literally) for about a week trying different things, but it ended up fiercely asymmetrical and sometimes had bumps that looked like little pointy ears.  I decided to just sew 2 rectangles together, the back one slightly larger to accommodate the tush, and put a band on the top like a neckband from a t-shirt, and met with success.  I've made her several of these so far.  They look super-comfy; I haven't made myself one because I don't want to be made painfully aware of how much bigger my bum is than hers.
The skirt on the right I made on Easter whilst waiting for company to come over--it was that quick to put together.  There are 2 darts in the back and a side zipper; other than that it's straight seams and a band that gets sewn inside the waist so there technically isn't a waistband, in the traditional sense.  She selected the fabric, and asked me to make her a few skirts for her birthday--this is one of them.  The other is made from shirting fabric with a tropical-Hawaiian flavor to it.  Since I know a bit more (but not much) about clothing alterations, etc. these were much less beastly to put together than the super-simple black one was at the time.
I decided to make a sample of the Asian skirt so I wouldn't waste her skirt fabric, so I dug into my stash for some stuff I wasn't in love with to make sure the pattern would work out ok.  I sewed in the most beautiful zipper ever. EVER. I texted my friend and let her know how awesome I am. It was that good.  I did all the other steps, and then it came time to attach the waistband.  And my measurements were way off.  I could not figure out what the h-e-double hockey sticks I had done. I pulled out the pattern pieces, I checked my measurements, I filled the swear jar, I promised to write a letter to Burda (who usually have great patterns), but still--nada.  I held up the skirt by the waist, thinking that would help.  And then I saw it--I sewed the zipper to the bottom of the skirt (essentially upside-down); no wonder I was so far off. The kicker is that at the exact instant I realized the issue my sister walked by and said (totally unaware of what the deal was) "Ummm...I think that's going to be way to big for me."  I had to then text my friend and tell her I wasn't that awesome, and then she laughed at me for a while.  I emailed the story to my old sewing teacher (old in the sense that I don't take lessons anymore and she used to be my teacher--she's actually quite young) and she wrote "I'm glad to hear some things don't change.  I'm typing that with a smile, just so you don't think I'm being sarcastic."  But I fixed my error, and the sample skirt is actually a pretty cute wearable garment.
That's all the tomfoolery I have for you today.  Get ready Monday, because here I come!
From the convoluted brain of Bethany at 8:26 PM