Down the rabbit hole

Well, good evening.  I am FINally connected to the wireless here.  I was having big problems, so I sought the proprietress, and of course as she came to help me it worked fine and I felt like a doofus.  I almost had a mini panic attack and thought "WOW, I never thought I'd come to need technology so much." 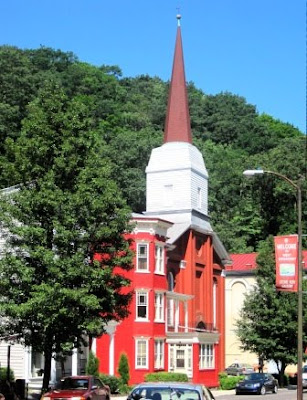 I don't know what this church is called.  I just thought it was a pretty thing to see when I turned the corner.  Especially under a sky so blue it should be criminal.
So here I am snuggled in the Pocono mountains in Jim Thorpe.  The town used to be called Mauch Chunk (for sleeping bear, because some mountain supposedly looks like one) and at some point they named it after an athlete. I made it here in good time.  I remember before when I was up here finding a great quilting and antique shop so I sought it out again, only to learn the antiques part was up for sale and the quilt part had been sold and moved elsewhere. I punched the address into the GPS and went almost 20 miles out of my way to spend $12 on fabric.  But that's out of my system now.

When I got here and was all checked in and unpacked I was instantly overtaken by that feeling of "What am I supposed to do now?"  My stomach said "Get some food in me" so I said "OK, stomach. Let's go."  A few blocks down the street (I say down, even though I firmly believe no matter which way you walk in this town it's all uphill), and happened upon a little cafe: 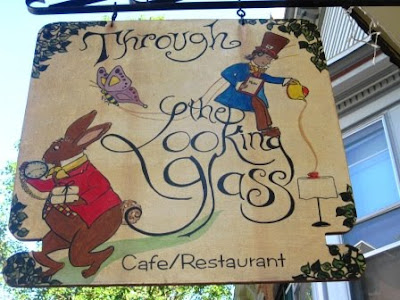 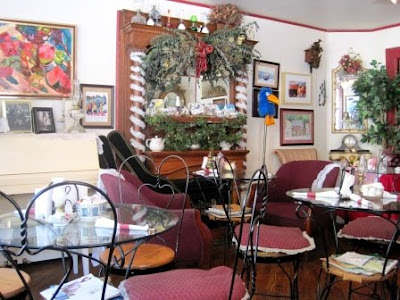 The dining room.  They had the niftiest music inside--very old-fashioned and idyllic.
After quieting my stomach with a heart-shaped seafood lovers sandwich, I wandered aimlessly for a bit.  I am well aware of what there is to do here, but I wanted to just walk and look, so I took a nice slow pace (very unusual for me--I tend to race from one thing to the next and wonder what I was in such a rush for).  I sauntered (because it's much sassier than simply walking) into a store called The Gem Shop.  I didn't check if these were for sale but I'm pretty sure I'm going to want them or something similar in my life one day: 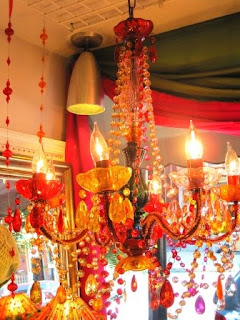 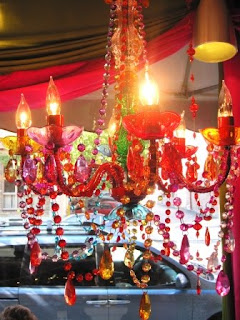 I think these would look awesome in a white room, with minimalist decor.
I like these artsy/craftsy places because it's refreshing to see things done a little differently than in your typical 'big box' stores that abound in the city: 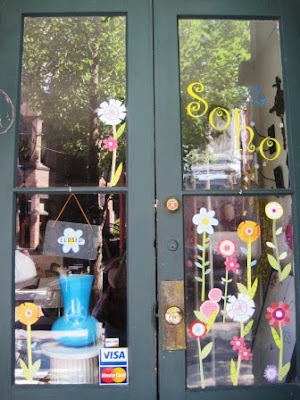 They shouldn't make the door look so inviting if they're going to be closed.  Some places here are only open on weekends.
I had myself the most delicious sundae at the Rainbow's End, an adorable candy and ice cream shop.  I was watching her make my sundae, and when I saw that she was putting the walnuts on when the cup was only half full I must have had a "WHAT??? GIVE ME MORE!" look on my face, because she explained that she puts toppings in the middle and on top, so that you don't eat all of it at the beginning.  It seems such a simple concept, and yet I never thought of it before, or seen anyone else make a sundae that way.
Afterward I realized my head was a'hurtin' a little bit, so I got some coffee.  This place must be new--I've never seen it before. It was kind of weird.  There were hand-drawn pictures of bands/musicians on the wall (not weird), and one lone couch in the middle of the floor (weird).  One of the owners was holding court, talking about how he chose the musicians to paint.  When I ordered my coffee, the conversation stopped (literally) and I could feel eyes burning into my back.  I sugar-and-creamed it up and hightailed it out of there.  I didn't feel like going back to the B and B yet, so I sat on a bench (of which there are plenty in this town) and drank my coffee and just watched. 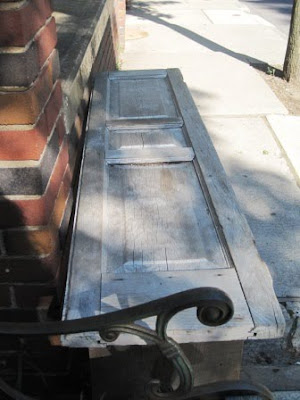 A bench made from an old shutter.  Love the concept, but I don't think it looks comfortable.   Especially the middle part.  I was sitting on the bench next to it.
While I sat here I noticed a few things.  People say hello, and mean it.  They smile warmly.  They wave from their trucks.  I don't know these people at all, but they're so friendly.  The streets are tiny, and there isn't much parking.  A woman pulled up and double-parked in front of a house to unload groceries; people calmly waited and went around.  If that happened in the city you'd get the hand, then the finger, then some words, followed by a car speeding by to really drive home the point of how unappreciative the driver was of your double-parking.  And I love that small town thing where people walk places at night without having an overwhelming feeling that something is going to happen to them.  I love my city, but sometimes it's nice to know that somewhere everything isn't so hurried and suspicious.
When I made it back to the house I rested my rear right here and read for a bit: 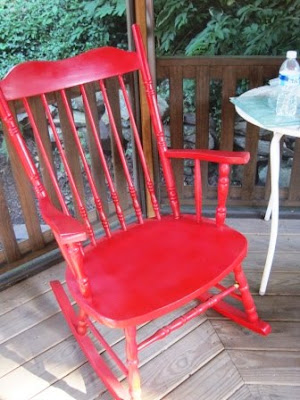 This perfectly red rocking chair was in the gazebo out back. 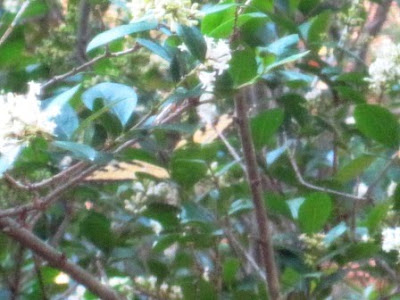 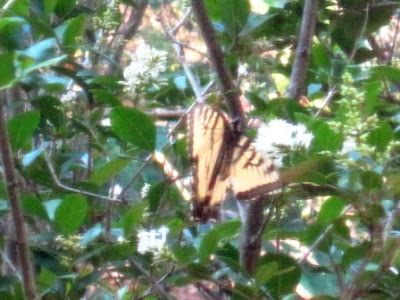 Things that are meant to fly are really difficult to take good pictures of.
So far so good.  But I did notice something.  It is painfully difficult to eat by yourself.  So awkward to sit at a table by yourself and wait for your food to come.  And when you say things like "Can I have a table for one?" people look at you sympathetically for some reason, as though single folks should not be dining out.  The main thing I'm missing (and yes I know--it's only been a day) is having someone to talk to whenever I want.  Normally I have a comment for everything, but I had no one to turn to and share those with.  There's a huge difference between wanting the house to yourself for a few hours and being somewhere else by yourself for a few days.
I'm going to have some tea, watch NCIS (some things don't change no matter where you are), and curl up in the most comfortable looking bed I have ever seen. I hope it doesn't disappoint.  G'night, gang!

UPDATE:  My Uncle Andrew asked me to let everyone know that he loves Jim Thorpe just as much as I do :)

From the convoluted brain of Bethany at 9:55 PM