"You used up ALL the glue on PURpose!!"

(A little early for 'A Christmas Story' quotes, but it fits...read on--you'll see).

Hello, dearies.  As usual, I spoke too soon. Yesterday I was all "blah blah blah done my to-do list blah blah blah" and today I got two and a half orders.  The half isn't official yet because the details are up in the air.  But tonight, I did finish the old to-do list.  Here are some pics, even though they may look familiar: 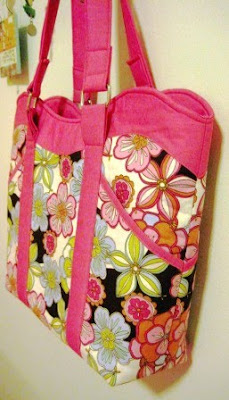 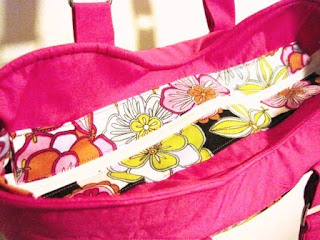 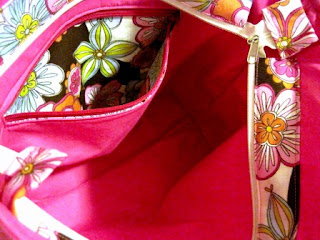 I think I've got the zipper part down.  I thought I was done but I had to go and add some fabric to the zipper pull--the bag could be sewn inside out but heaven forbid there's no fabric on the zipper pull :)
Finding the pink for this was a bit of a chore.  First we tried tone on tone, but nothing was worthy.  Then we were going to try brown; I think brown would have made the flowers pop a bit more, but would have been much more bland.  Then I tried plain pink broadcloth, and it worked--the shade of pink is in-between the two pinks on the bag, so it works nicely.  It's bright yet muted, and fun but not obnoxious.  Me likes.
Tonight I summoned up my will-power and finished 2 more projects. They only took about an hour each, so I don't know why I put them off.  First up is a sunglasses case: 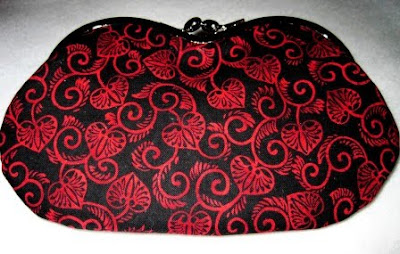 The fabric is called 'Kyoto Hollyhock' and came from Joann's (I don't remember designers, just the store name apparently).
This is pretty much the same case as this one, but I made it a little larger.  Sunglasses tend to run quite large and don't fold up quite so compactly as they used to; so the case needed to be bigger so it could snap shut.
And this is a simple little Easy Peasy purse: 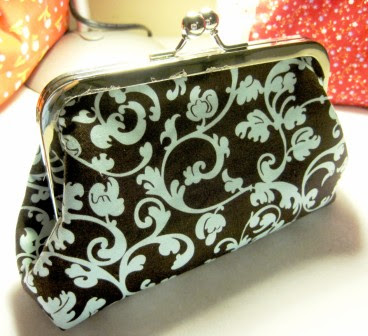 This fabric has been seen before....
Frame purses are pretty easy. They don't use much fabric and the sewing is pretty much straight. The only part that can be a little fiddly is gluing the purse into the frame. I've been using an awesome textile glue that has a great hold--I try to pull the bags apart to test it and it doesn't budge.  Tonight as I was going around the first half of the frame of the second purse, I noticed a hunk of glue on my hand.  I thought "Hmm, must have touched the frame somewhere."  I kept moving along, getting glue on my hand and still thinking that I must have just touched some glue.  I grabbed a fabric scrap to wrap around the tube because even though it's grippy it was still slippy (tee-hee).  I left it to set up and went to wash my hands; at this point I noticed that I blew a hole in the side of the tube--glue was no longer coming out of the top, but out of the hole, and there's no way that was going to be working out.  I had just enough glue in the tube to finish but now I was stuck.  I had bought a tube of similar glue at Joann's and figured I'd try it out.  If odor is any indicator this new one isn't as strong (but I did my yank test and it seems ok).  It doesn't apply as easily, and the tip is just a bit too fat to fit in the channel of the frame.  I'm glad it was on the second purse--I don't have any more of these on my to-make list, so I can order the good stuff without worrying when it gets here.
Ok. I have to go pick the dried glue off of the frames.  And find nail polish remover to get the glue off of my fingers.
From the convoluted brain of Bethany at 11:27 PM