I 100 Percent Stole This Idea

Because it was too awesome not to.

I honestly don't know how I happened upon this blog to find this idea but I bookmarked it because I knew I was going to copy it. I went to Joann's last week just for thread (whaaat? no really! just for thread!) and felt tremendously empty-basketed. And then I remembered this, and ran around looking for supplies. And today I made my own marble solitaire board: 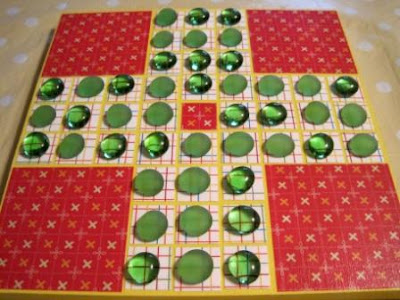 (UPDATE: How to play: (the large red corner squares are for decoration--the play area is the cross-shaped grid made of the white paper). Lay out your pieces like above - one on each square, leaving the center one open. I made my center square red for contrast, but it doesn't matter as long as you leave it open at the beginning. Then, you simply "jump" the adjacent marbles like you do in checkers, removing each piece as you jump it. You can move in any direction, but not diagonally. The point of the game is to keep jumping the marbles until you only have one left. And if you're some sort of crazy-genius, you might be able to make that last one land in the center spot. I am not such a genius. The best I could do was five marbles left. I'm not going to tell you how many tries it took to get it down to even that). I hope that made sense, but if it didn't ask away!)

When I originally saw this idea I had futuristic visions of all sorts of vintagey-looking game boards and tins of little playing pieces on some small wooden book shelves in my future children's playroom. My kids (two boys) were spending a quiet afternoon happily playing while I sewed away in my craft room next door, because it was snowing outside and we were all cozy indoors. It was a very delightful day. Ahem. Back to the present. And reality.

I could have asked my dad to saw me some plywood, but have I mentioned my impatience before? So I bought my wood at Joann's--I'm not sure what it's for, but it looks like a canvas except it's entirely of wood (the back is open and everything, like a reverse frame). I painted it yellow, used some bright papers, and bought a bag of those glass gems that they sell in the floral section. 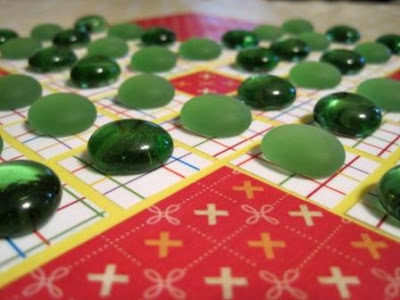 I love how it turned out. I am not, however, wonderful at marble solitaire. 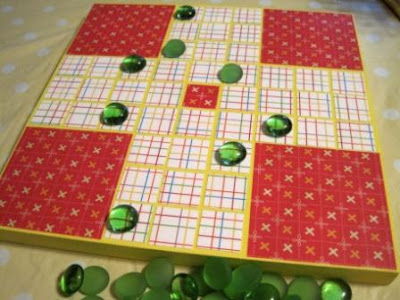 Wouldn't a handmade game like this make the most unique gift ever? There HAVE to be kids left in the world who aren't addicted to video games and computers and whatnot, and would enjoy playing an old-fashioned game that exists outside of a virtual world (says the girl who spent a large part of the weekend playing Angry Birds on her new phone).

I'm linking here, even though it's not my idea--because maybe she doesn't link up, and I feel the world needs to know :)

From the convoluted brain of Bethany at 10:04 PM