Delighted to Be Finished

Happy Sunday evening! How was your weekend? Mine was pretty full. I'm getting some projects much closer to being finished than they were this time last week. Love that feeling! I don't have many, but I don't like having any, so even just a few is too much. Here's one I've been looking at with a sneer for about six months. Remember this jelly roll quilt top, made out of the 'Delighted' fabric line? I've had the top finished and the sheet I used for the backing folded up and tucked in the project box under my sewing table since I last posted about it. You know what kept me from finishing it? My utter hatred for laying out and basting the layers of a quilt. I have plenty of room to maneuver in--I just absolutely hate doing it. It makes me break a sweat and I hate sweating so that's probably why I hate doing it so much.

The Sunday before New Year's Eve I moved the sofa and crawled around the living floor with The Exorcist playing in the background. I know--what? What a weird choice of background noise! But I had to put on something that nobody would want to come in and sit down and watch -- because then Charlie would plop himself on my stuff and I'd have gotten nowhere. I think George W. Bush would have called that 'strategery.' 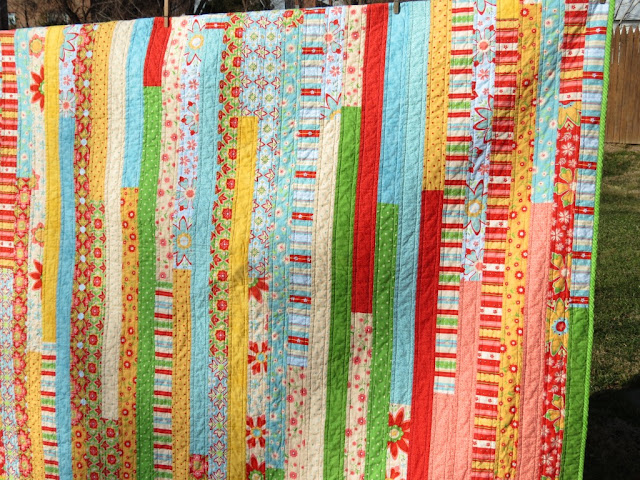 I love the totally random placement this method gives you. It stitches up in a few hours, and ends up as a perfect snuggle size. 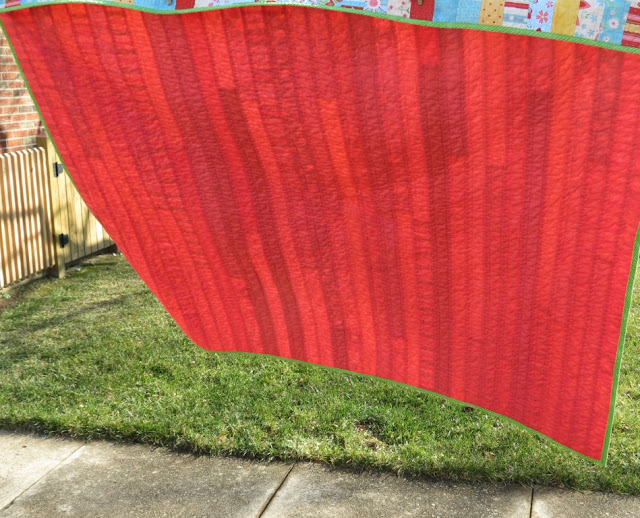 I used a twin sheet cut to size for the background. I love doing that, but it can be hard to find just the right color. So far I've been lucky. 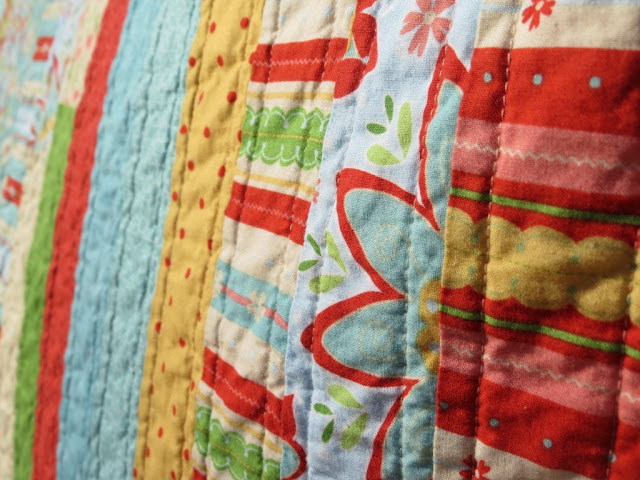 Straight-line quilting on each side of the seams. Simple. I wanted to try a decorative stitch but the weight was too much for a nice-looking stitch that didn't get distorted, so I went with a simple straight line. Wanna hear something funny? If I moved the quilt out of the way you'd see Charlie, doing something. OK, it's more gross than funny...I think it's funny. 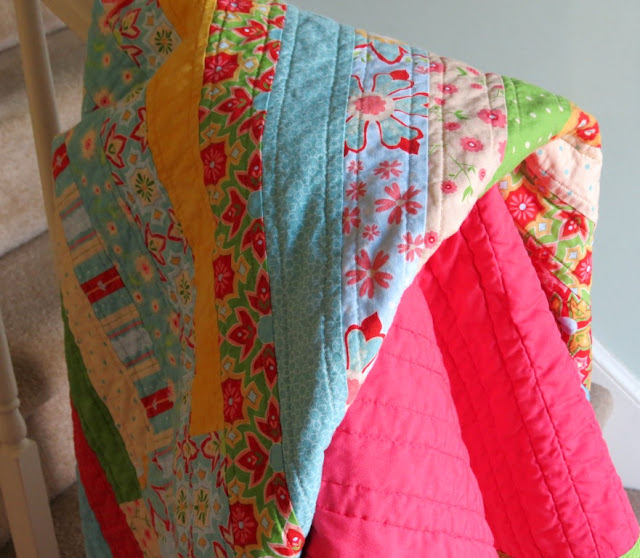 This gives you a better idea of the colors. I guess the full-on sunshine was a bit too much. 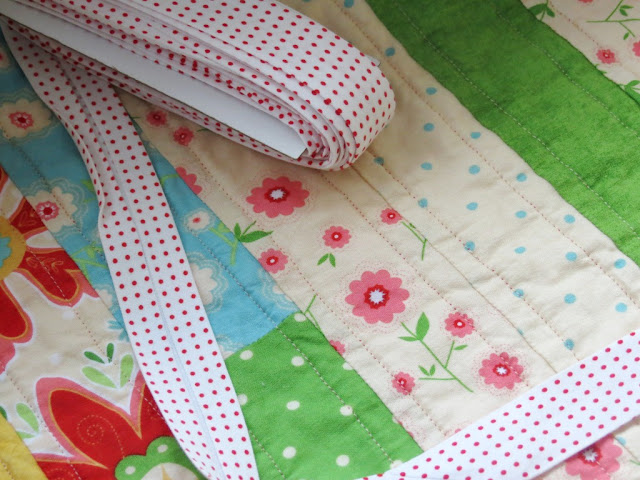 As mentioned here, I made nine or ten yards of this binding. I held the fabric up to a section that was not this one and in poor light and decided in matched. Yards of tape and a few iron burns later, I saw how poorly it matched almost every other section. My mother even said "Why did you think that matched?" But at least I have a ton of super-cute polka dot bias tape ready for something else. And if you're looking at that and thinking it isn't so bad, I assure you that reality is worse than the photo. 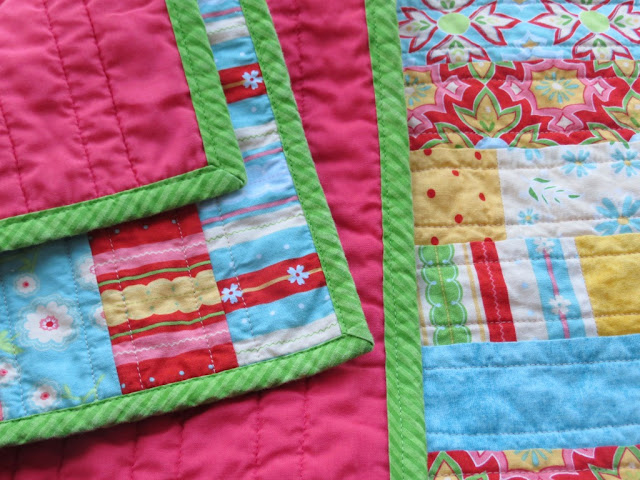 After a last-minute trip to Joann's where this green was the only thing they had that matched she was all finished. And yes, I checked this time--I took the quilt with me. 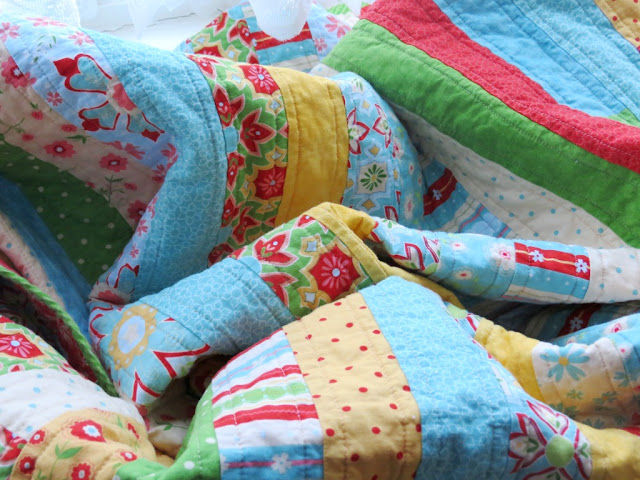 I must say I'm delighted this one is finished, pun fully intended.

I won't lie. I had a beast of a time with this one. The entire first half was practically sewn twice--for almost every line of stitching I put in I had to pick it out and resew. Almost. Every. Row. No matter what I did. I said some filthy things, lemme tellya. As though to make up for it, the sewing fates smiled upon me kindly for the second half--it stitched up lickety-split with nary a stitch picked out and redone. It's folded over the back of a chair in the living room and looks deliciously wrinkly and vintage (I always wash quilts when they're finished so they crinkle up).

Have you got anything you've finished yet? Or anything sitting around since what seems like the beginning of time?