About two weeks ago, I was taking a sanity break at work and checking my email. I had received an ad from Joann's saying that all Janome machines were on sale. I wanted to see what they carried (since they only have Singers in the store, and I think one model at that). I saw this machine for what I consider a high price, but on sale for a nicer price. I scouted the web for reviews, and all of them were excellent. Then the waffling started. "I'm going to. No, I don't need it. But all those stitches! But no, I'm good with what I have. But think of the quilts! OK, but Lola's in great shape." So I made a few calls and was soundly convinced I should. So I did. 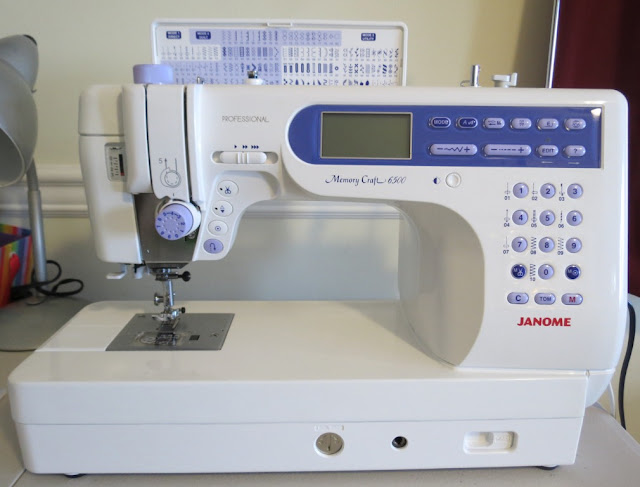 I looked at a few other machines just to make sure, and decided this one would be perfect. Others had embroidery, some were newer models but had problems with certain aspects that provided quite a bit of angst. So I went with the packed-to-the-gills but slightly older model that had five star reviews wherever I looked.

At the basic level, this one is not vastly different from Lola--same buttons and placement, same throat plate markings, same set-up for changing feet--so it wasn't hard to get used to. But that deeper throat space (I've also heard it called harp space) is very nice, and should be comfy for quilt sewing (as opposed to the wrestling and wrangling I was doing). 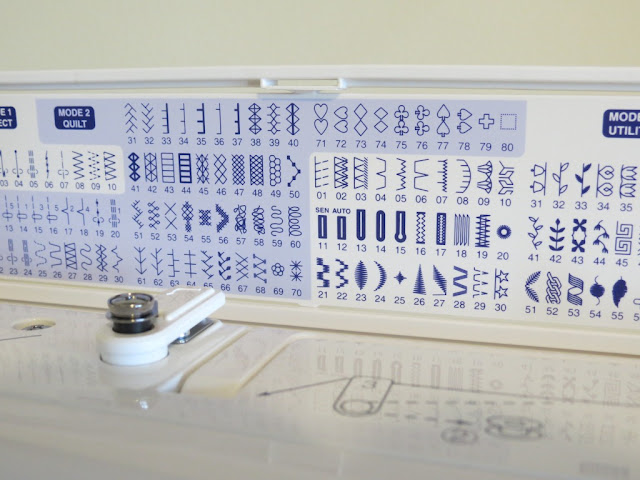 There is a ton of stitch variety here, including a few sets of letters and numbers on the reverse of this flippy chart thingee.

I thought I was going to have a difficult time figuring out how to work the stitch programming, but it's actually quite simple and almost intuitive. I read the manual for good measure, but the machine is set up so nicely you could probably figure it out without it. 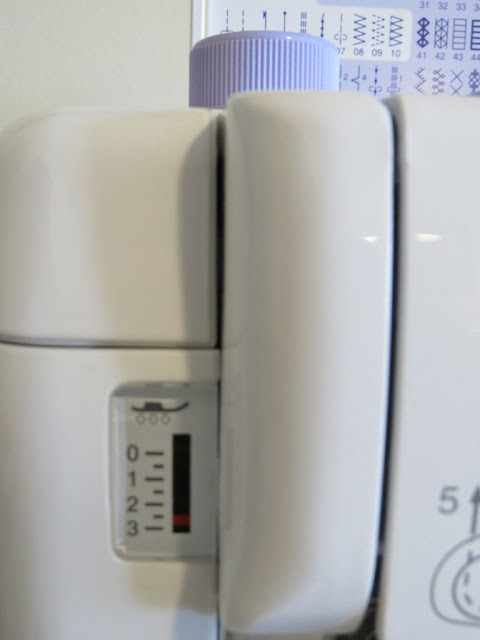 See that purple knob up top and the 0-3 dial towards the bottom? That's the adjustable pressure of your presser foot--by turning the knob either way you can ease up or press harder depending on your fabrics (this is NOT the tension--just foot pressure). 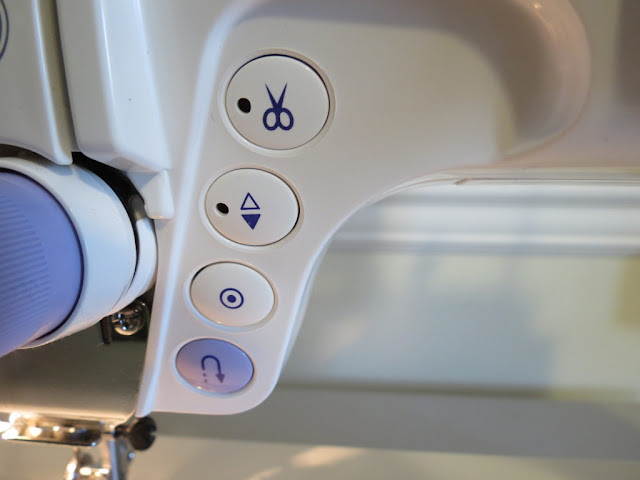 These buttons are fairly standard. The purple is reverse, sitting on it is the lock-stitch, and the double triangle button is the needle up/down selector. The scissors? Read on.

One feature this has that is new to me is the automatic thread cutter (the scissors button). It seems like such a luxury, and it surely is, but oh. My. Heavens. I love it. It's my new favorite thing. When you press it the mechanism cuts your threads on the underside of your fabric about a half inch away. While I wouldn't use this for ordinary sewing as I like to trim my threads closely, this is an absolute delight for quilts! I never before realized how much time I spend pulling the project out, trimming, pulling the threads to the back, and so on. Not to mention how much thread I realized I was wasting. 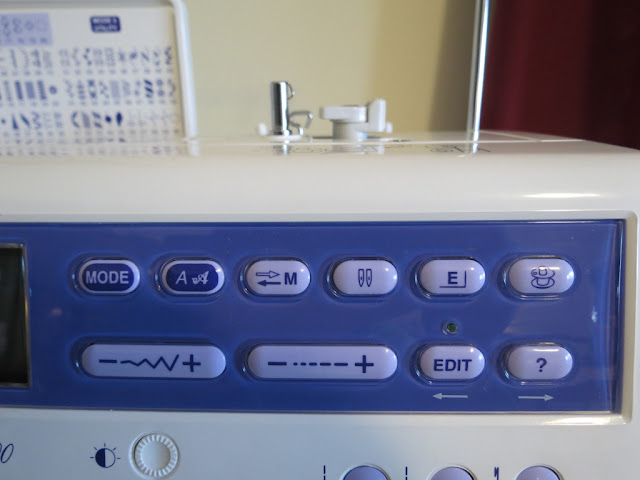 These buttons are how you boss the machine around.

This is where you lengthen the stitches and adjust the needle position, select twin needle mode, edit your stitches, and even ask for help! This machine has a separate bobbin motor so you can theoretically wind a bobbin while you're sewing, but I haven't tried that yet. You just select the bobbin button, move the little doohickey over, and away it goes. There's also a double spool holder mechanism on the back, which is nice for twin needle action (or will be, once I try it). 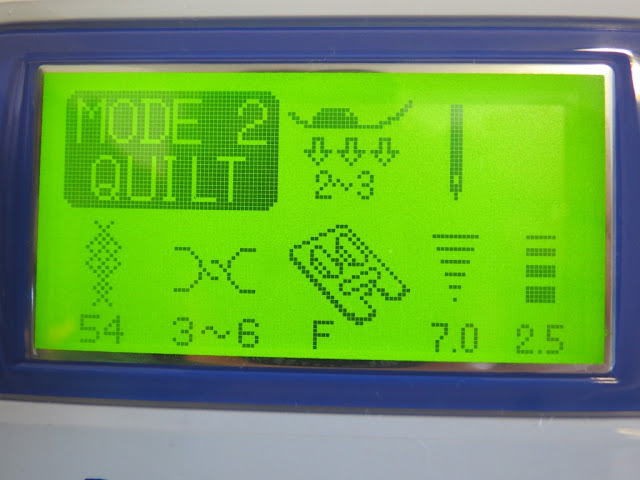 The screen gives a lot of information. On the left is the stitch you've selected (#54 in this case), then the suggested tension settings, the best foot to use, and the stitch settings (some of which can be changed, others not). At the top it shows you the mode you're in, and the presser foot pressure that would work best. Sometimes if you try to do something it doesn't want you to it shows you a polite little message that tells you to knock it off. 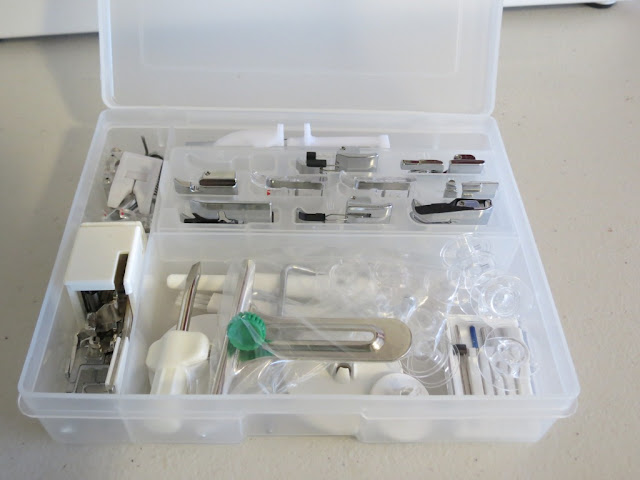 You get a nifty plastic box that contains a ton of presser feet, some that I've never heard of. But it comes with a walking foot, which is a nice score (especially since my other one has been limping along lately). I ordered my machine from a site called Mr. Vac and Mrs. Sew, which is where Lola came from, too. They even gave me next-day shipping (!!!) and a freebie pack of other goodies. 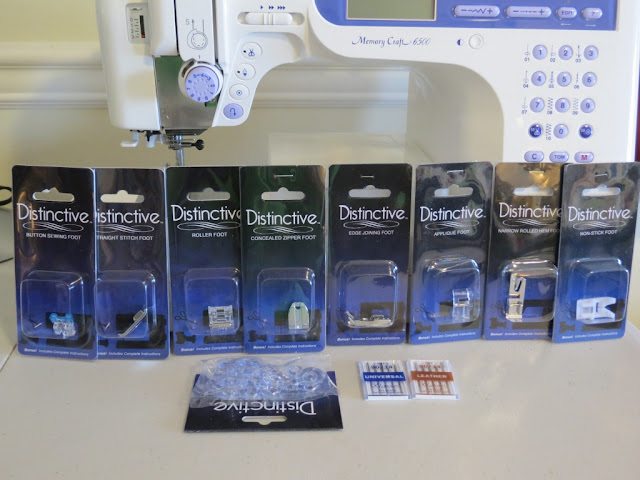 I put her through the paces with a huge piece of scrap muslin, and some lime green thread that was still rolling around on my table. I would have chosen differently if I had thought how they might photograph, so these aren't the greatest shots. Firstly, the machine is vewwwwwy quiet (like it's hunting wabbit, hahahahahaha). The backstitch you do to secure the seam is almost invisible it feeds so accurately. And I definitely did notice a difference in the way it feeds overall. Here are a few little tidbits I stitched up. 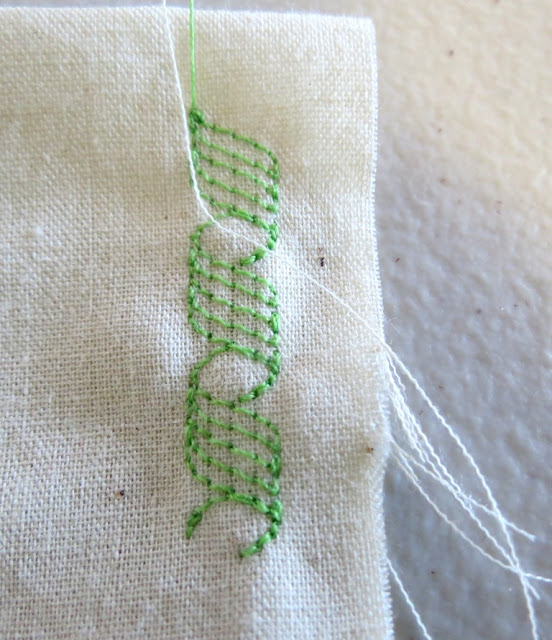 This was the first fancy stitch I tried. I love how it sews up. I'm thinking of getting some of those fancy rainbow threads they sell and getting creative. 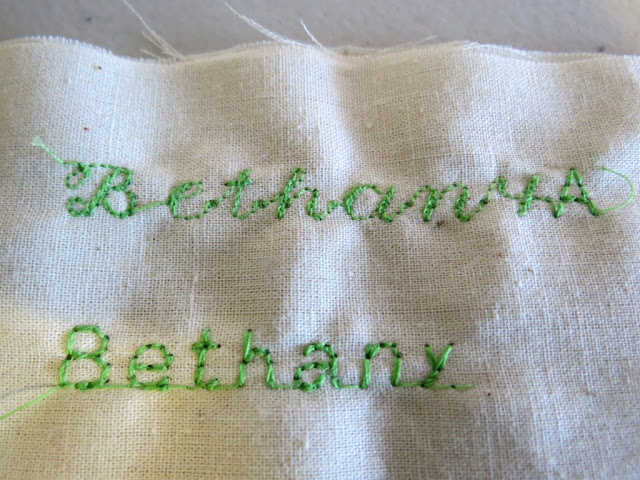 Trying out some writing. I'm thinking I'm going to stitch 'Sweet Bee Creations' on some twill tape and sew it as a tag of sorts into my bags. I forgot to delete the 'A' on the top version - it's not a mistake. Well...not a machine-induced mistake.

One of the things I'm excited to try with this is the reverse stitch button. You select your stitch and ask TOM (or Turn Over Memory) to flip it and it stitches mirror image.

These are the same stitch. I used the regular stitch and then flipped it (the bottom stitches in this pic) with the programmed settings. For the top row of stitches I hit the elongate button and it lengthened the stitch five times. This can't be done on each stitch but it politely tells you so.

I wanted to try some satin stitching to look like embroidered letters. This will definitely be doable in the future once I figure out the swirlies on the curvy letters (cut me some slack on the disjointed B--it was my first shot). This was an option on Lola, but it took too much fiddling with tension and stitch length and width for my meager store patience. This is much easier to do when the machine tells you what it needs.

I haven't been in a sewing mood lately, even with this baby in da house, but I did make a project with it. I had mentioned here that I needed to make a runner to protect the wood on a cabinet my dad made, so that's what I made. It was simple wholecloth quilting, but I finished the entire thing in one evening. ONE evening. That never happens! That's how much time I saved from not wrestling with the piece and snipping threads. 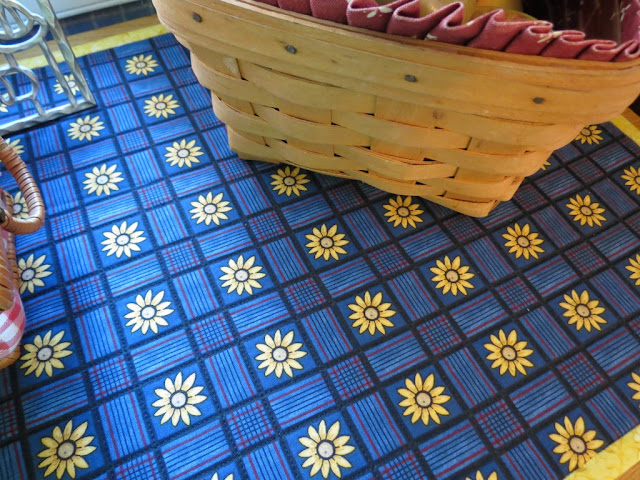 This quilted so smooth and easy you almost can't tell it's quilted. 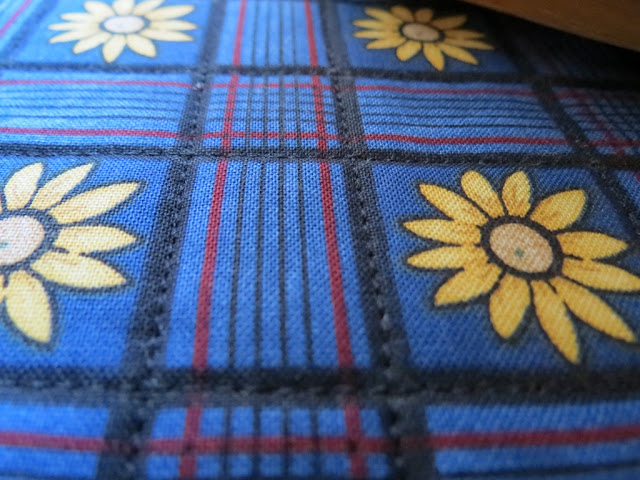 I sewed with black thread and followed the black lines. 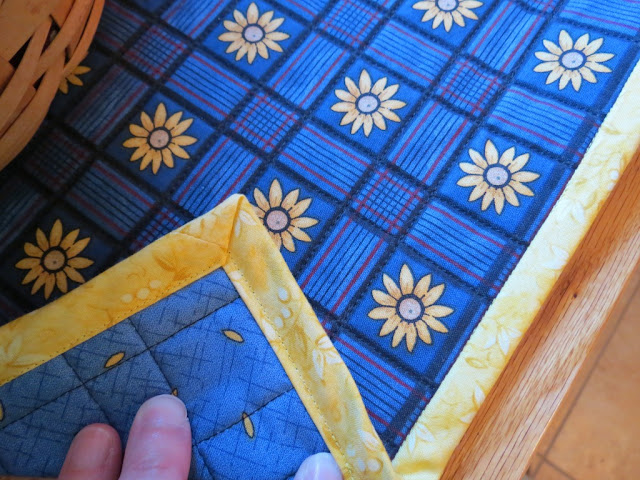 I meant to use yellow thread on the back but completely forgot.

This also came with a nice big extension table, but it wasn't necessary for a teeny quilt. It should make regular quilting much easier as I won't be trying to defy the laws of physics. It also comes with one of those extension bar things that will raise and lower the presser foot for you when you need both hands to control your project.That's quite nice! This machine does not come with automatic tension adjusting--that would be marvelous for free motion quilting, but I've also seen that some people have had issues with it that then extends to straight sewing. I enjoy straight line quilting anyway, though I love the look of FMQ (but don't enjoy doing it), so it's kind of a break even for me. The other thing it lacks is a free arm (you don't really need one for quilting or bag making). Lola has one, so if I need to stitch a wee circumference I'll call her back to service.

All in all, I'm really really happy with my new toy. Really happy. But I do have one problem. I don't know what to name her!!!! Any ideas? Suggestions are welcome!
From the convoluted brain of Bethany at 9:43 PM