Hi, kids! How's tricks? I mentioned a few posts ago that I got a new sewing machine. When I tell people this I almost always get the question "What was wrong with the old one?" Absolutely nothing. I just was ready for something advanced and very versatile, not to mention a workhorse. You'll meet her soon. But when I discuss sewing with people I often get asked what I sew with, what was my first machine, etc. So I'm going to give you a brief tour of the ghosts of sewing machines past.

Before I learned how to sew, knitting and crocheting were how I spent my time. After seeing an uber-adorable crocheted handbag my cousin Mollie made, I decided I wanted to try bag-making. I crocheted a cute yellow and white bag (with matching daisy) for my mom, but needed to line it. Never having sewn much of a stitch I was in need of a sewing machine but didn't want to spend a lot.

If I'm to be perfectly honest my very very first machine came my way a very long time ago and was long gone at this point (but it may be in the attic--note to self: search for it). I don't remember ever sewing anything useful with it, perhaps just some straight stitching. But here's a rough idea of what it looked like (and the decade whereabouts I owned it :) 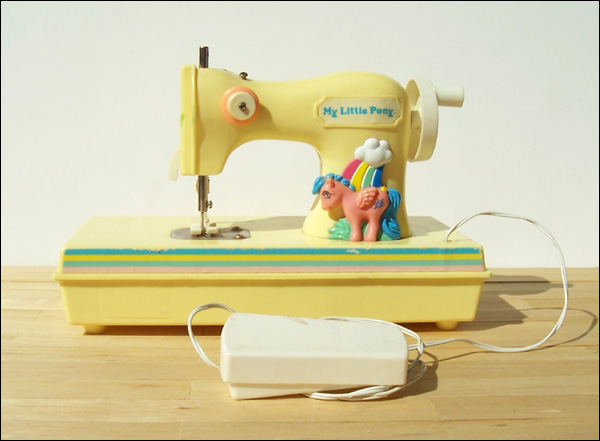 A My Little Pony sewing machine. After a quick internet search a Cabbage Patch Kid version was also sold at the time.

If I still had it, I would have definitely found a way to use it. As such, I had to scour the internet for something that looked simple. Which led me to what I call my teapot sewing machine, because that's what it reminded me of. 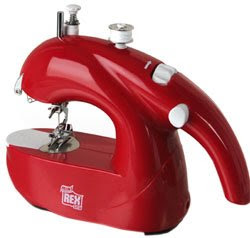 I found this on the Joann's website--after a coupon it cost me a whopping $12.00 plus shipping. It was...weird. You didn't use a spool of thread, you used two bobbins, both of which sat on top of the machine. There was no foot pedal - you pressed that white thing to the left of the needle down to start, and then pressed it when you were done. There was one speed, which, if you haven't sewn a stitch since that day in home-ec in seventh grade, was way too fast for anything accurate. Still, I was able to muster out two handbag linings with this thing (which I then hand-stitched in a winging it fashion to the bag exterior). Nothing complicated at all  as far as bag linings go- I was more pleased that the measurements fit than that I managed to get the pieces together with this thing. I didn't sew again for a while after that. Mostly because the bobbins ran out of thread and I had no clue what to do.


Then came Christmas 2006 (or 2005? I think 2006). Years ago I stopped wanting anything very much for Christmas so my mother was often left pleading with me to think of something, anything, that she could add to the few things I did want. That year she saw a simple sewing machine on sale at Target for crazy cheap. She thought I might want to make more stitched bags and line them (and remembered the teapot machine escapades, complete with naughty words) so she thought a simple sewing machine would be a good idea. It scared the crap out of me to look at it, so I put it in my closet for a year. And then decided to try and make it work. I was still a fraidy-cat about it, so I signed up for sewing lessons, which I took for two years. I used only this machine during that time span. 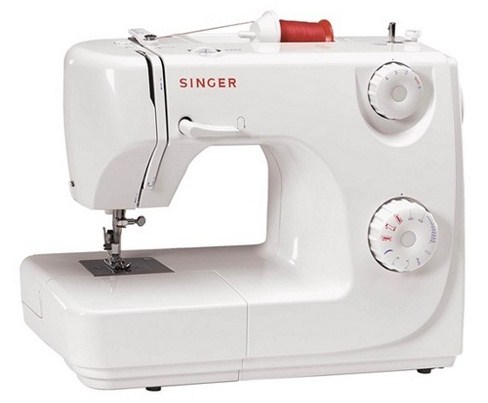 My Singer Prelude 8280. Where it all started. It makes me grin now to think how afraid I was to touch this thing.

I took this machine to every lesson for the next two years. My teacher sneered at it. Visibly and audibly. She told me I wouldn't be able to make anything with it and should have gotten a Bernina (ha! Okaaaaaayyyyyyy). My hackles were raised because it was a gift from my mumsy/best friend and how dare she speak ill of it! Whilst this machine is nowhere near the top of the line, it did (and will still do) its job very well. Having only ten stitches under its belt and no fancy bells and whistles made me, I believe, a better seamstress. Modern machines do so much of the work for you, but with a simple machine you must build your skills at a more basic level. When the teacher told me I would grow out of this I thought "What more could I want in a sewing machine?" For a very simple machine I highly recommend it for someone new to sewing or for someone who is going to do occasional sewing (though I used it daily for a variety of projects with no problem). I used this machine an immense amount in the two years it was my only, and we got along amazingly well. I cleaned and oiled it regularly, and never had much of a complaint from it. She was a regular at the far end of the kitchen table :)

After a couple years I begrudgingly saw what my teacher meant about wanting more out of a sewing machine, but I wasn't forking over the dough for a Bernina. I was getting much more serious about bag making and needed something with more power and a little more variety. I still didn't feel like I needed to take a grand old plunge into anything too high end, so I went with a fairly basic computerized Janome. 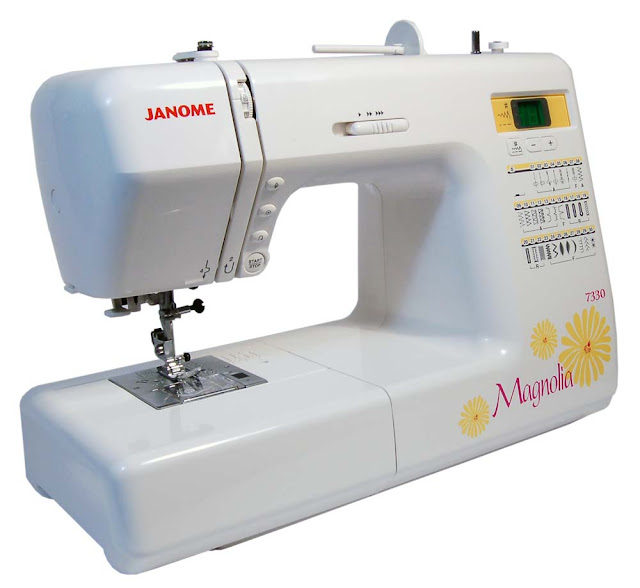 I was kicking this machine around in my head, and when I saw a review of it online I decided to go for it. It cost what I considered a lot at the time, but it is a great machine and one I would recommend for any level of sewist. Fifteen needle positions (which took me way too long to discover), thirty-odd stitches, up/down needle settings, extra high presser foot lift, and automatic speed control. These things are all little luxuries that I am glad I had (especially with bag making). This girl, my Lola, is a stinkin' work animal. All she has asked is that I keep her clean and lint-free. Almost every single thing you've seen on this blog has been stitched by her. We're buds.

Towards the end of last year I was thinking I might start selling some quilts, but found that I was wrestling them through the machine quite a lot and it was having an effect on the quilt. Any issues were purely cosmetic, but when you want to sell a quilt you can't say "Oh, it's perfectly fine, it just looks bad here and there." Add to that the fact that I've been seeing a lot of quilts with a lot of stitch variety on them and have been a little envious. So although my Lola can sew quite the bag and even more, I felt I needed more if I want to make quilts that truly look good to anyone besides my mother. I've also been wanting some simple embroidery options that Lola just doesn't have.

A couple weeks ago I spotted a fabulous deal for what is now my new sewing machine. I hastily conducted the "Should I? What do you think? Should I?" opinion poll, and kept getting the answer I wanted. You'll meet her next post. And no, it's still not a Bernina :)
From the convoluted brain of Bethany at 11:24 PM