Cuten Up a Gift Card

Do you ever run across something so adorable in its simplicity that you sing to yourself "Maaaaaaaaaaking iiiittttt!" and you stop at the craft store on your lunch break and stock up on the goods? I do that a lot. The problem is I'm craft impulsive and if I don't make that thing right away I lose my excitement for it. Such was happily not the case this time. I placed the goods in view of my sewing machine to serve as some incentive for finishing my quilt (I told myself no little crafties until that was done) and by the time I was finished all that stitching I was ready to go.

My mom and I spent an evening cutting and button-stitching, and then I spent a few hours the next evening stitching things together and tying them up. It may be one of my most favorite things ever because they're easy, they're cute, they're fun, and they're useful. So here is my got-slightly-carried-away pile of fun. 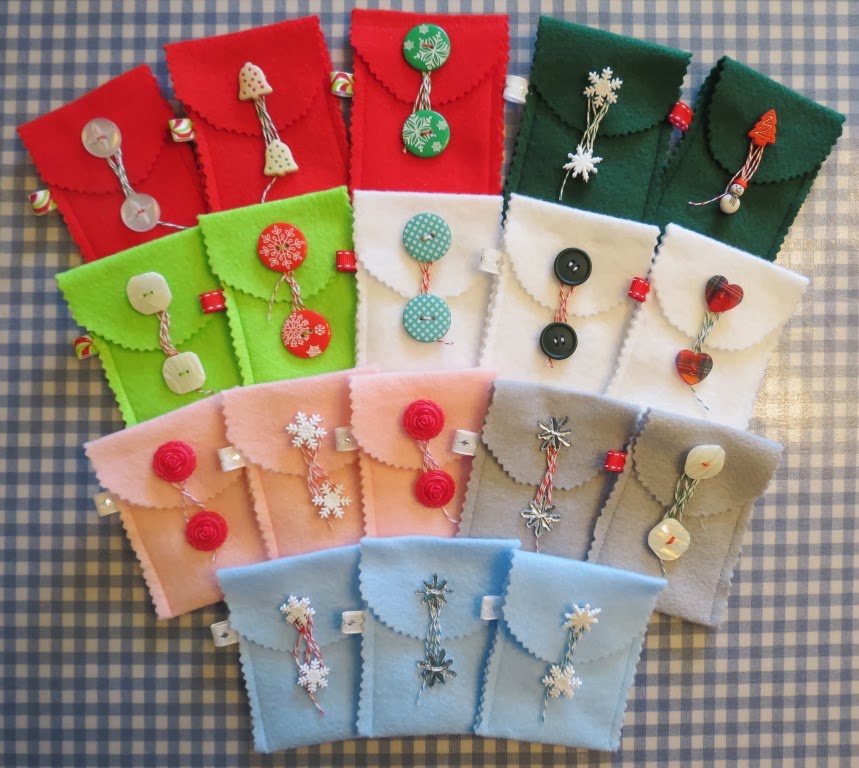 What are they? Little felt gift card holders thanks to Strawberry Patches. I had an idea rolling around on making these out of paper, like a wee interoffice envelope, but attaching the string was giving me pause. These are sooo much more fun and the string is no problem to tie on. I won't go into detail as to how they're made as you should really check out the tutorial and see the samples she made up. But I will show you the happy little bits I stitched together-- 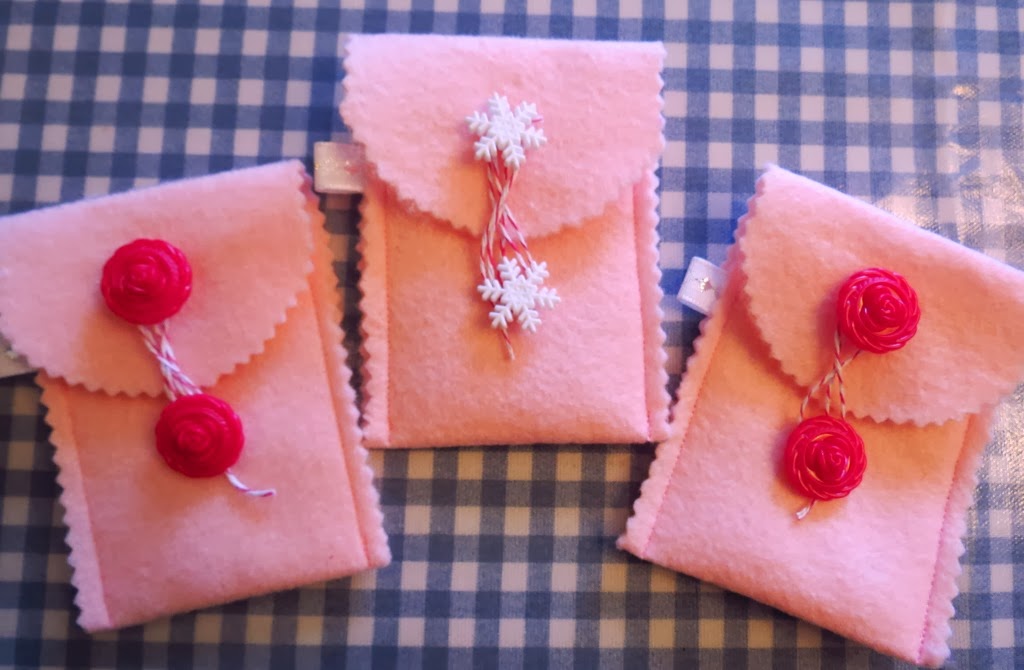 The pinks are so soft, so pretty. As a group I think they're my favorite. The little rose buttons I had in my stash--they were a Mollie Makes freebie. The snowflakes I got at Joann's. 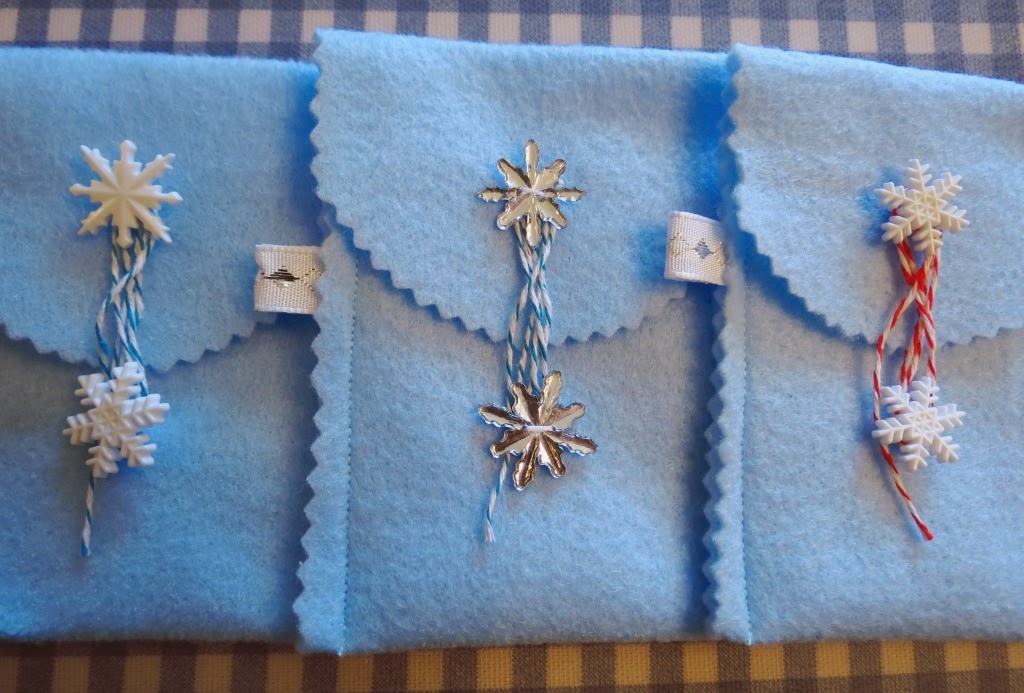 I also love the soft blues. I did have to throw in the red baker's twine on one of them, just because I love the combo. A few in gray for a more masculine look.... 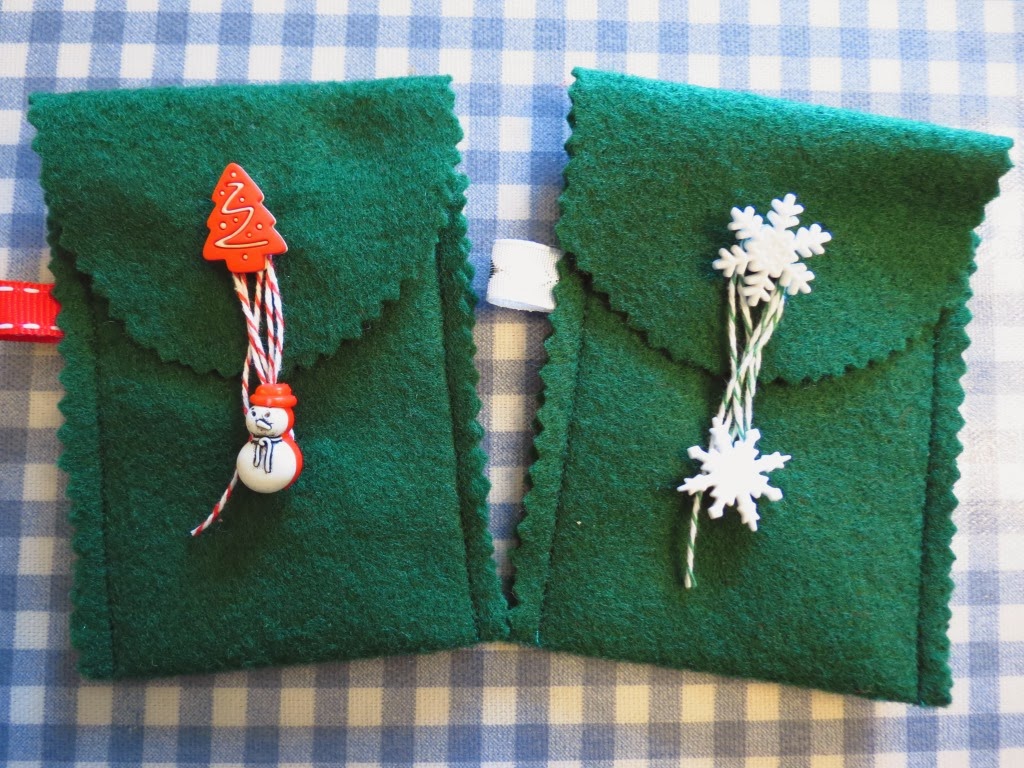 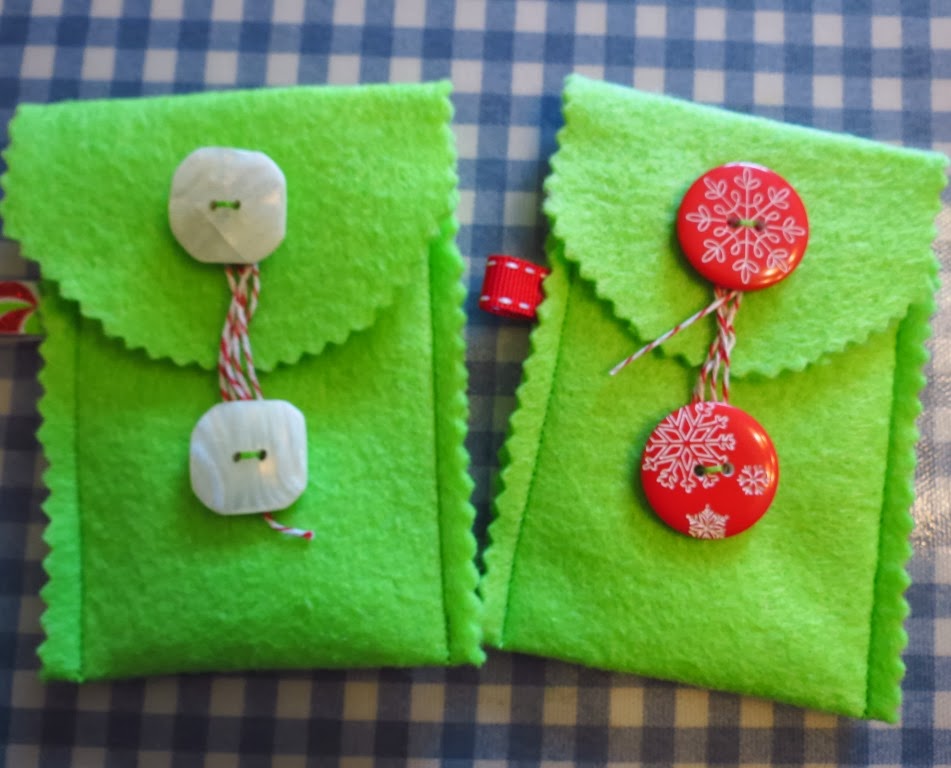 I love the lime green and red combo. It's so fresh and fun and funky. 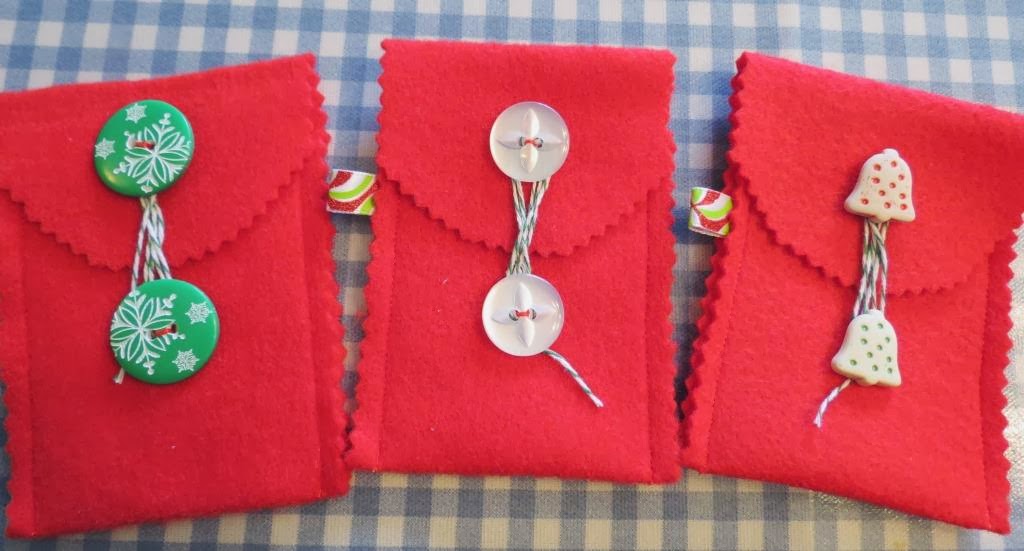 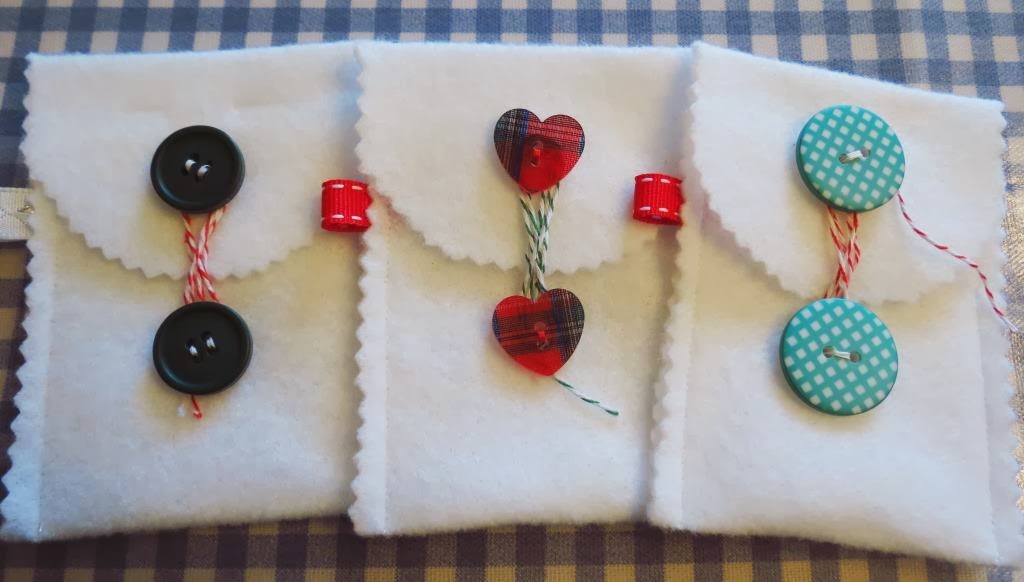 OK, these are fighting with the pinks as my favorite. The white is so snowy and fluffy and pure in contrast with the buttons. These might actually be my favorite. Especially the plaid hearts. 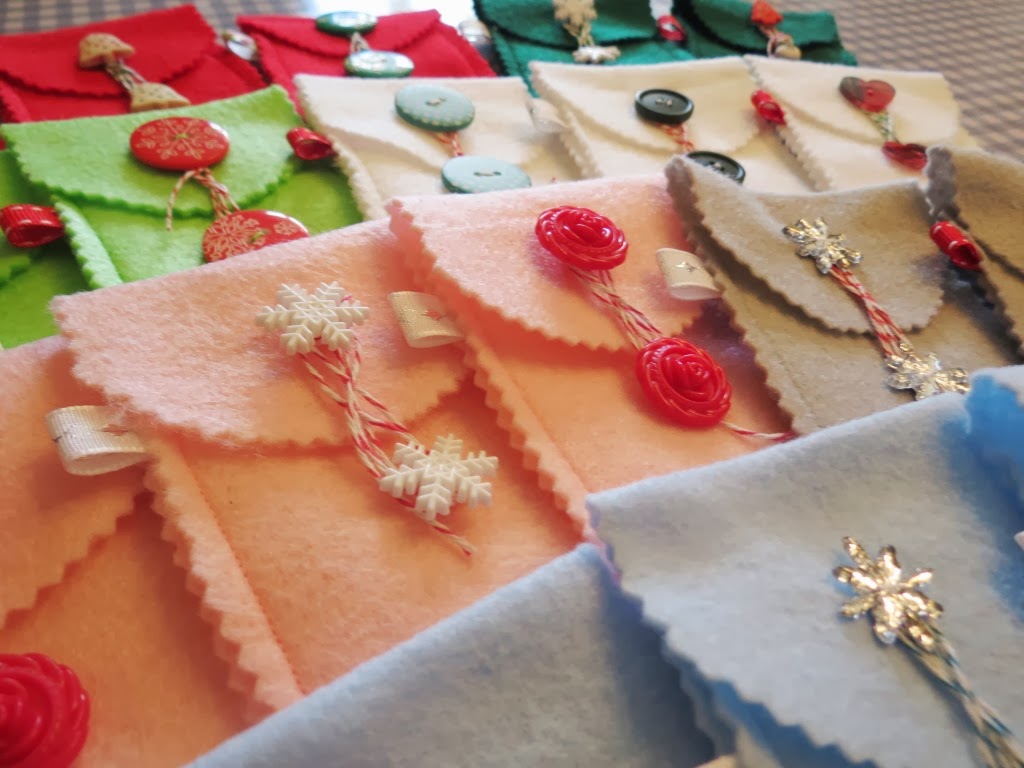 These were so ridiculously fun to make. Like stupid fun. A lot of felt tutorials seem to call for wool felt. The stuff is nice but not practically priced for simple bits like these. I tend towards the cheap acrylic stuff, but sometimes some pieces are thinner and don't feel so sturdy. I stood there in the store pulling out pieces and holding them up the light and folding them and feeling them to get an idea of how they would work up. Apparently this is an odd thing to do as I was asked twice if I needed help. I don't know if they meant with my shopping or mentally, but my answers would be no and maybe... 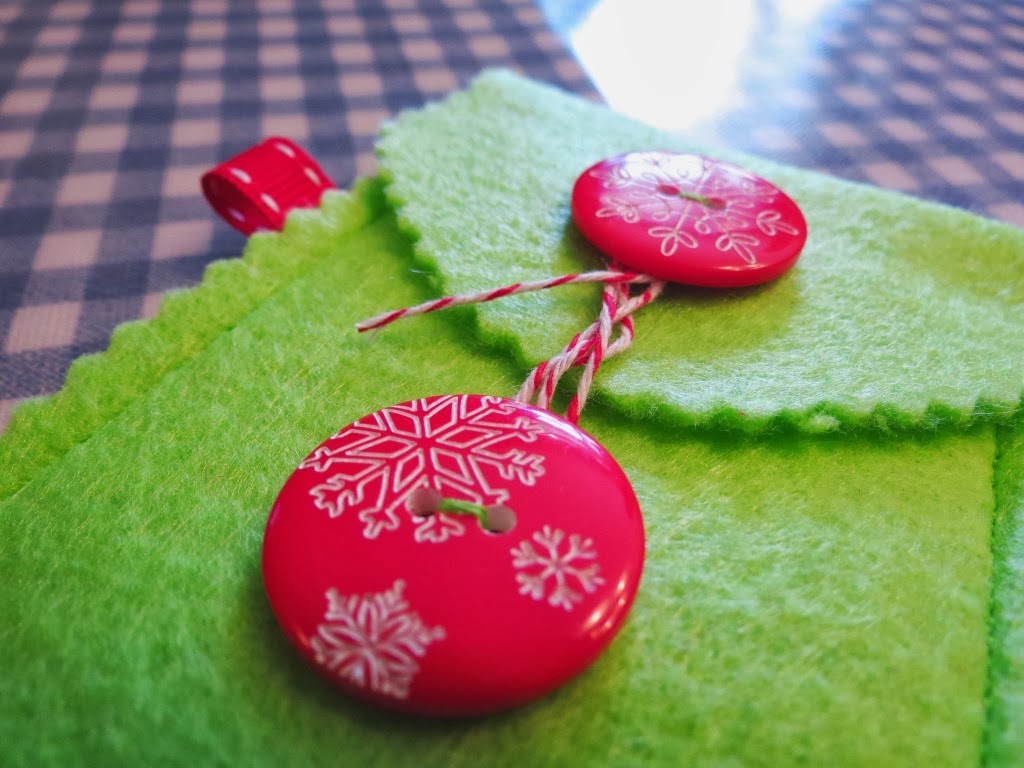 We used pinking shears for these. I have a wavy rotary blade, but I didn't have a good curvy piece to cut along so classic zig-zags it was. I got the baker's twine from one of those sites like Very Jane or Pick Your Plum, that offers a daily craftyish deal. I got five colors for a couple bucks and it's lasted me forever. 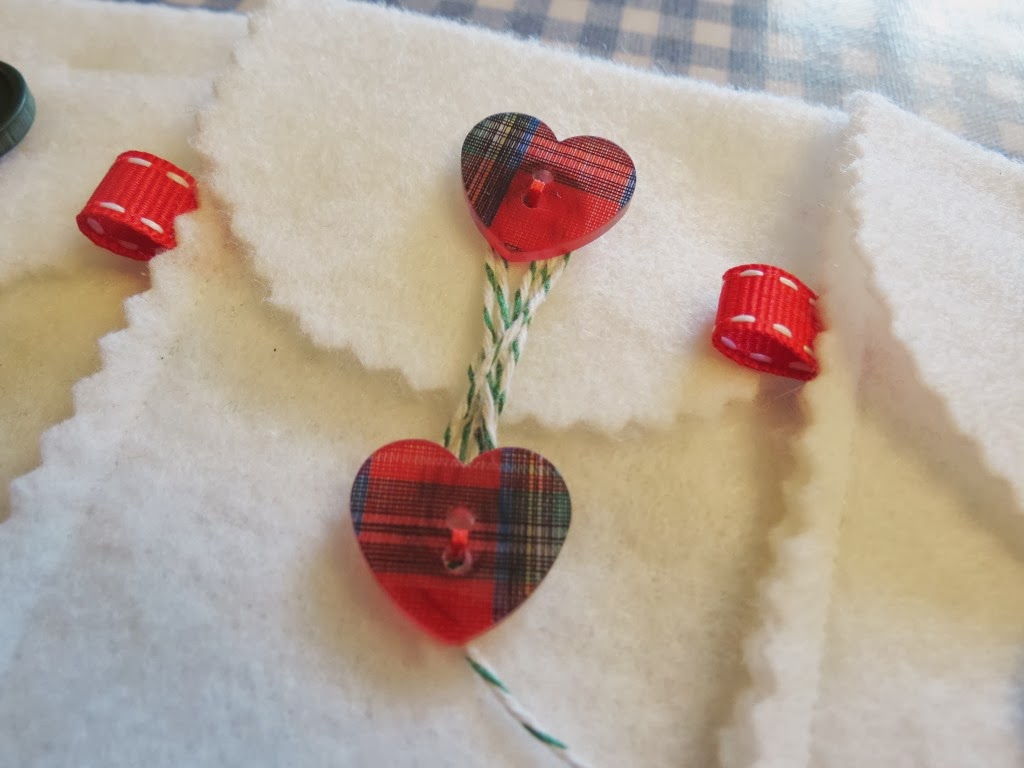 I've got a button jar that never seems to decrease. I just love buttons. I don't really use them, but they're so stinkin' cute. If a website offers free shipping at a certain amount and I'm not far away I almost always add in buttons to reach that total. I've had the red plaid hearts for years, and I'm so pleased I finally got to use them.

The longest part of making these by far was cutting them out, which tells you just how quickly they can be made. People tend to think a gift card is an impersonal gift, but I like them. Of course I'd rather give a physical gift, but sometimes a GC is the way to go. A cute little holder like this (and the personalization possibilities are absolutely endless!) can make what is essentially cash a little more personal. 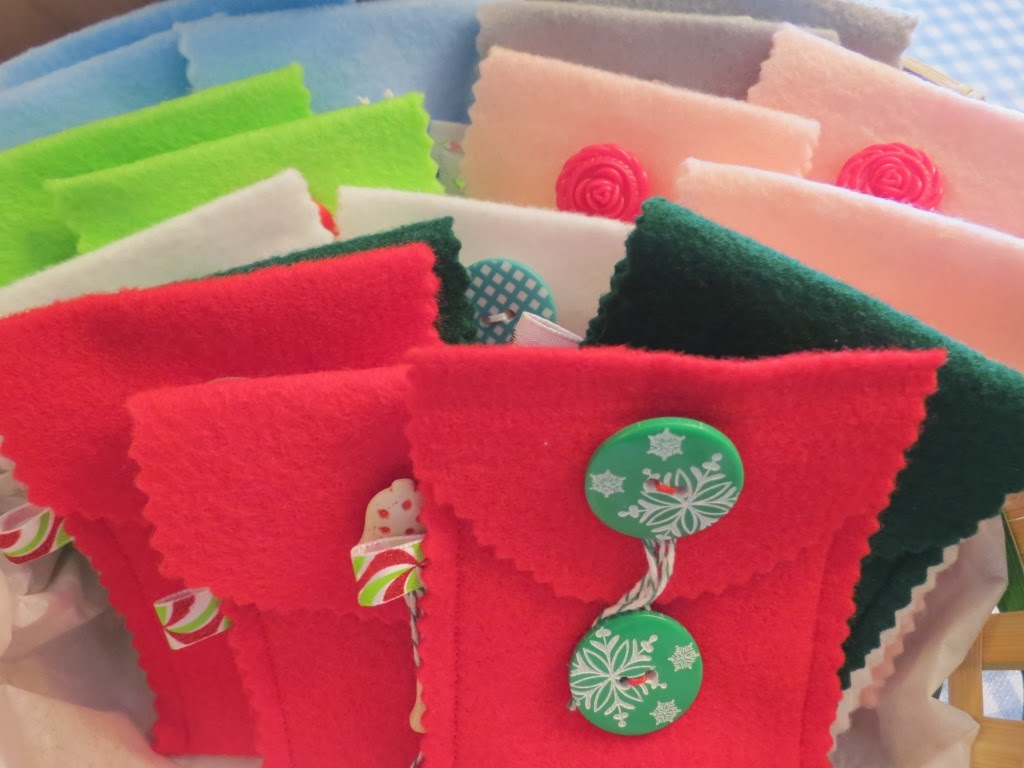 Plus have I mentioned the fun? And the cuteness? And the ease with which they are made? I have? OK, then.
From the convoluted brain of Bethany at 7:30 PM