One of My Mostest Favoritest Bags Ever

A couple weeks ago my mother says (kind of out of left field) "You know Pat? Who I work with? Well, you know her daughter? I kind of said you'd make her a bag." Foreseeing some time on the horizon (due to a snowy/icy Saturday on its way) I said OK, especially because her daughter is a sweetie who happens to have Down's Syndrome. Her favorite color is purple, which made me think "Uh oh" for a few reasons. Purple is not one of my favorite colors, I always have a tough time matching it up (like I have blinders on), I had no time to mess about with online shopping and holiday shipping nonsense, and Joann's has a meager purple selection. Sewing anxiety ensued. So I recruited my mom to go with me to pick things out (because if I had done it on my own the project would have ended up looking like it was for a 2 year old or an 82 year old).

Now, this order was quite specific--a quilted messenger bag sized just right to hold an iPad in a case (so at least I didn't have to worry about the bag also being protective). You know what made me a little nervous? The stupid flap on the bag (because I've never done one). You know what was easy? The stupid flap on the bag. So I cut and interfaced and quilted and cut and sewed and pressed and measured a zillion times, and had a finished bag. Wanna see? 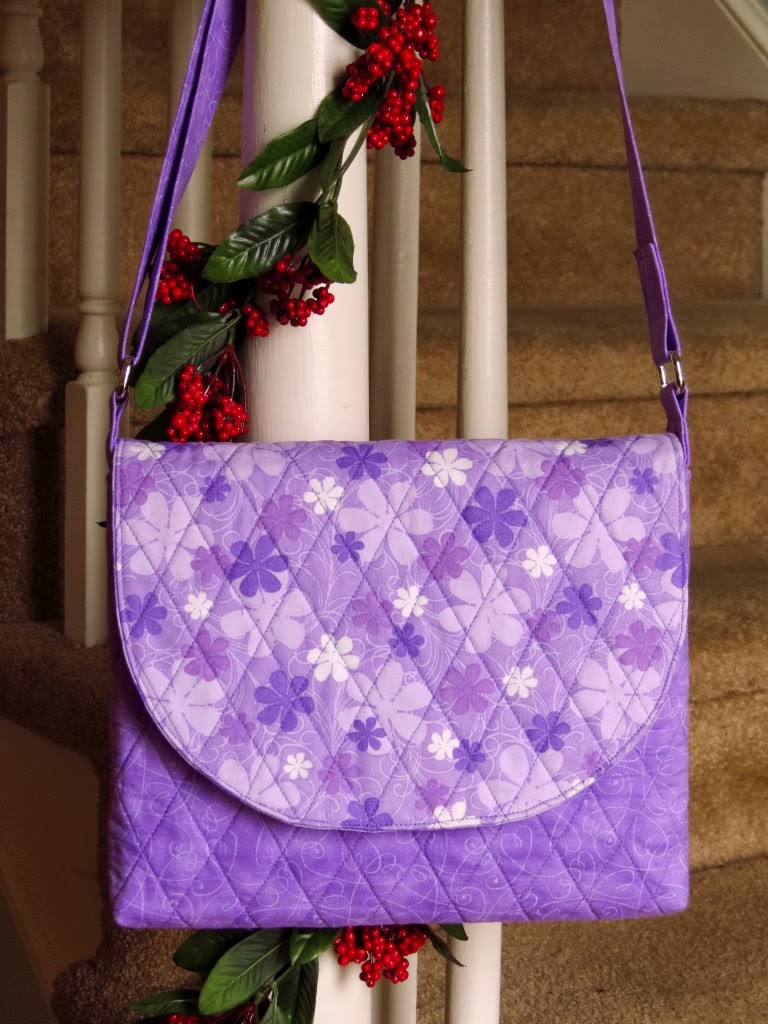 Didn't that turn out nifty? I love the quilting on it. I've never done that before, but I'm going to try and do it more in the future. It really makes it look a lot more professional, and the size of the pieces I used didn't take much time to stitch up. 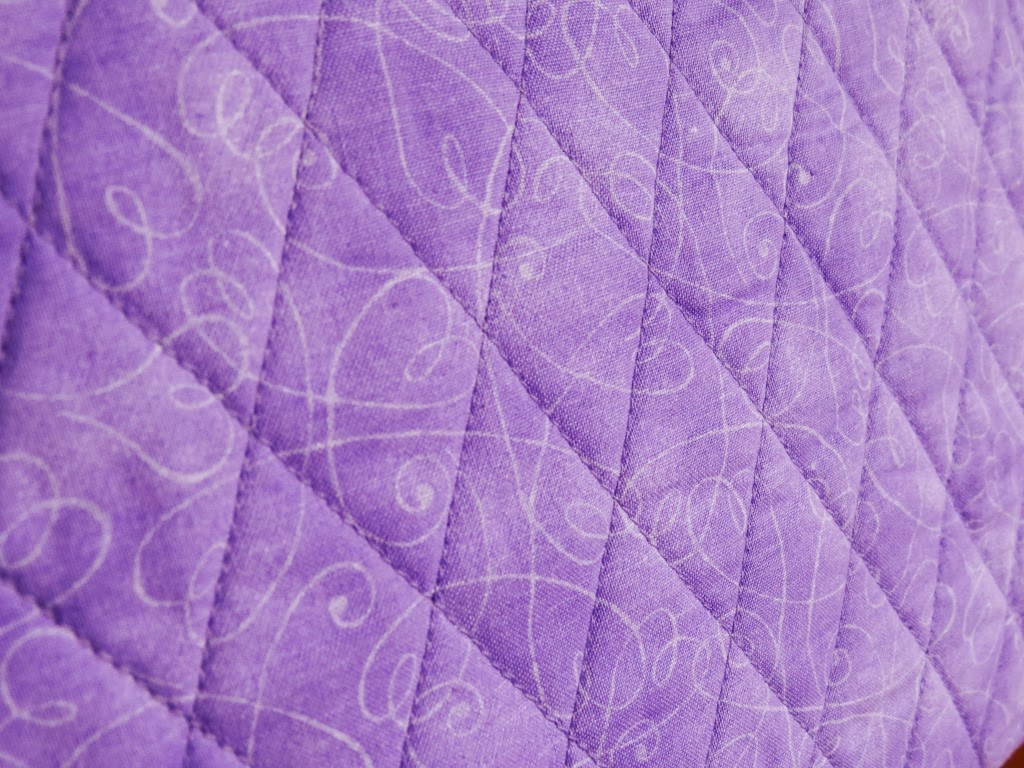 I interfaced the exterior pieces, and then made a sandwich with cotton batting and plain muslin. I stitched my favorite diamond pattern, trimmed to size, and then sewed as per usual. I did the same for the flap, but I also interfaced the fabric that made up the underflap, as it would have the mag snap in it. 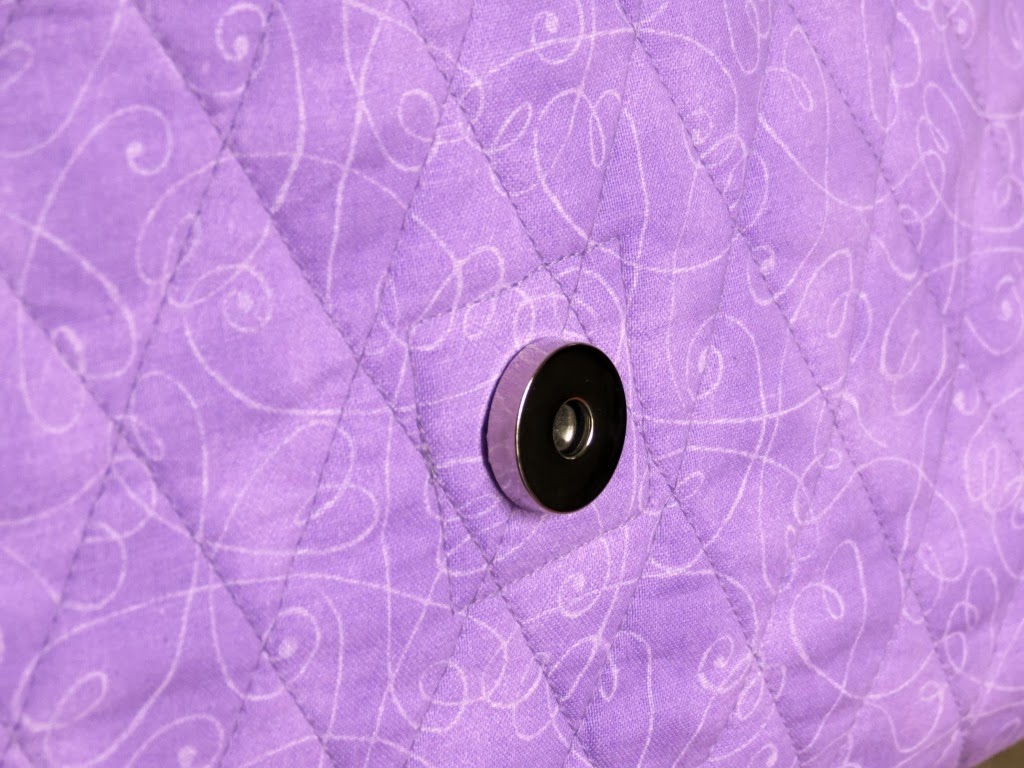 You know what made me most nervous? Placing the snap. About a million of my zillion measurements and bouts of fussiness had to do with the snap placement. It could be a touch lower, but that's to my eye (and I'm quite pleased with it as a first try at doing something like this).

My favorite part of this bag is the back-- 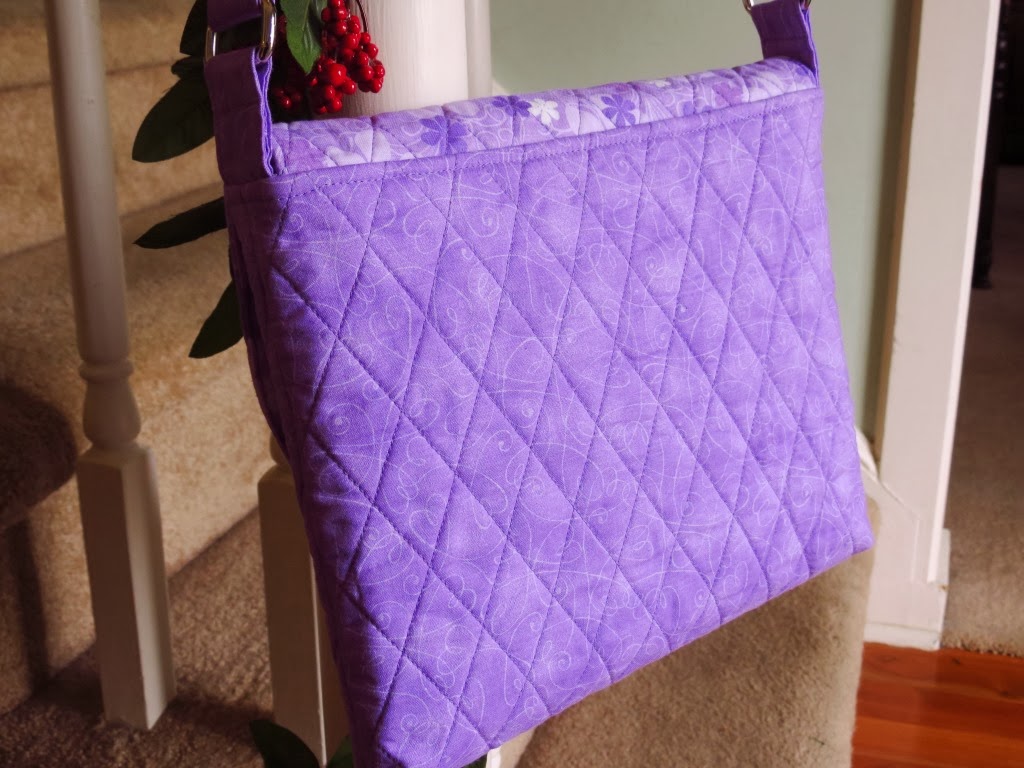 I think it's because of that hint of the contrasting flap at the top. There really isn't much too complicated about this bag. It is essentially two rectangles sewed together and the bottom edges boxed for a one-inch depth. The strap is also one inch, to keep it perfectly boxy looking. 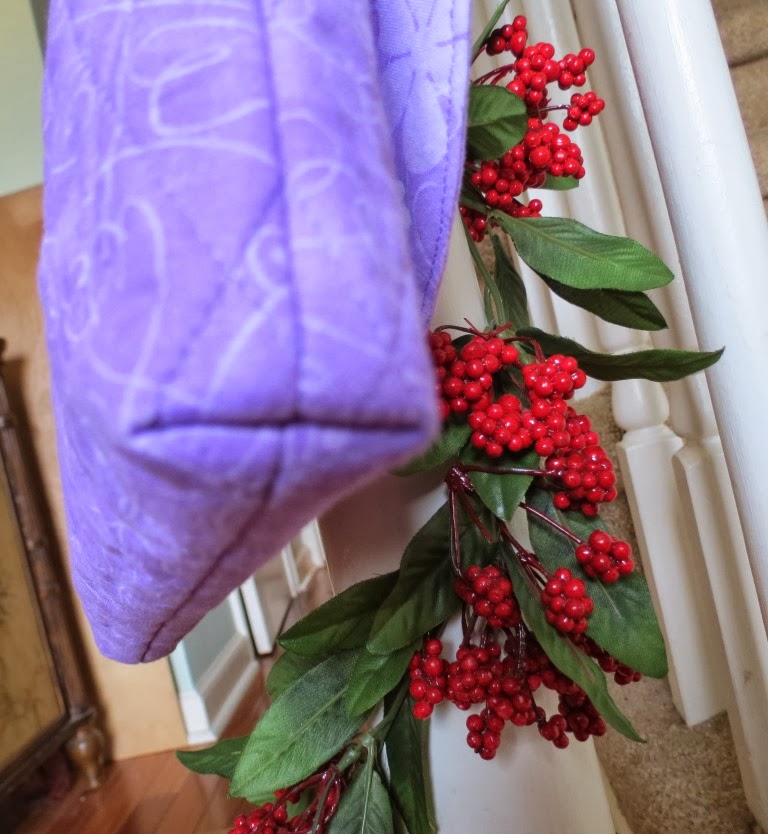 The bag is pretty blurry, but those faux berries are crystal clear, hahaha. The lining is perfectly sweet, and I would have loved it on the outside, but it's so light it would just be asking for a dirt disaster. 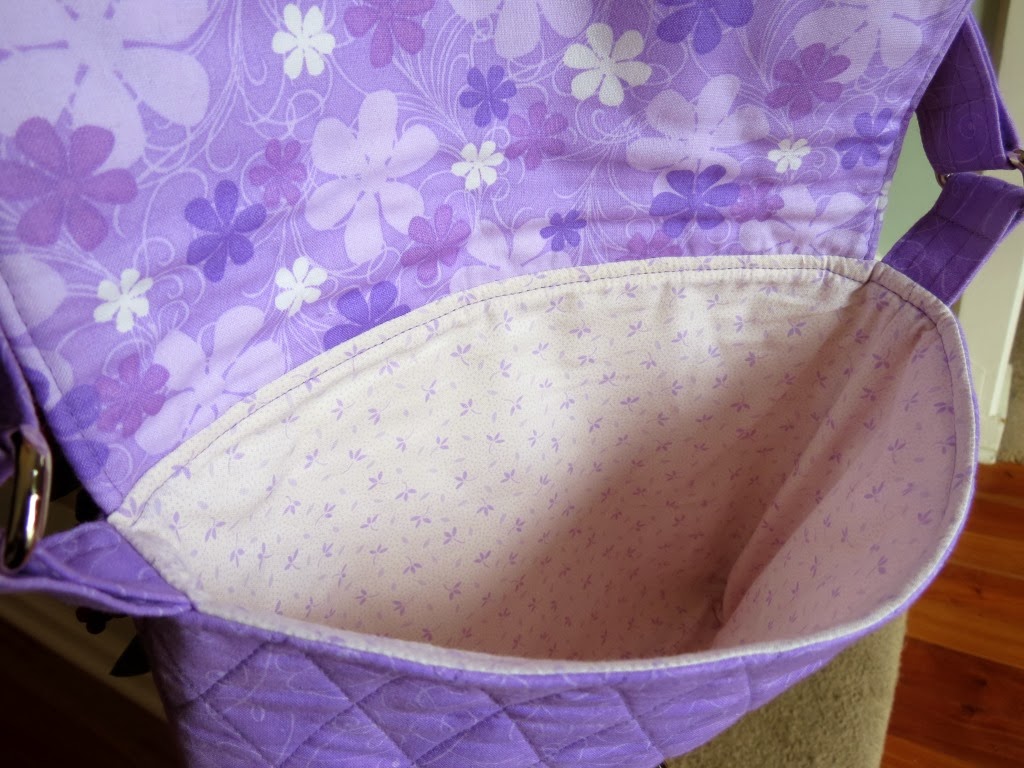 There are no extra pockets in this bag, which certainly cuts down on the time (I hate making pockets--I don't know why, they're easy. It's just a part of the process I don't care for). After making myself nervous about the precise size of this bag (almost into inaction) I noticed a book I had sitting nearby. It was almost the exact size of the measurements I had so I used that to check as I went along. There's just the right amount of wiggle room in this thing. And of course, it doesn't have to hold an iPad. It's a good size for a small handbag too (though a little bit more depth would probably be better for that purpose). 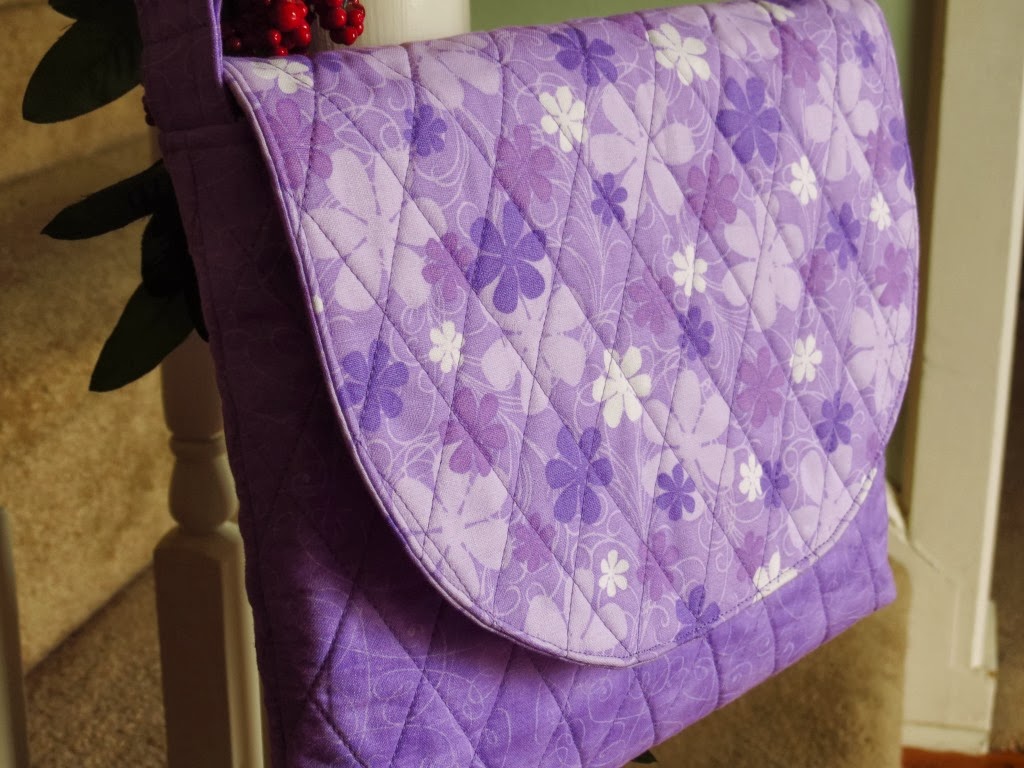 I just absolutely a gazillion times over loved making this bag. And the final touch? The adjustable strap (with twinkly hardware). 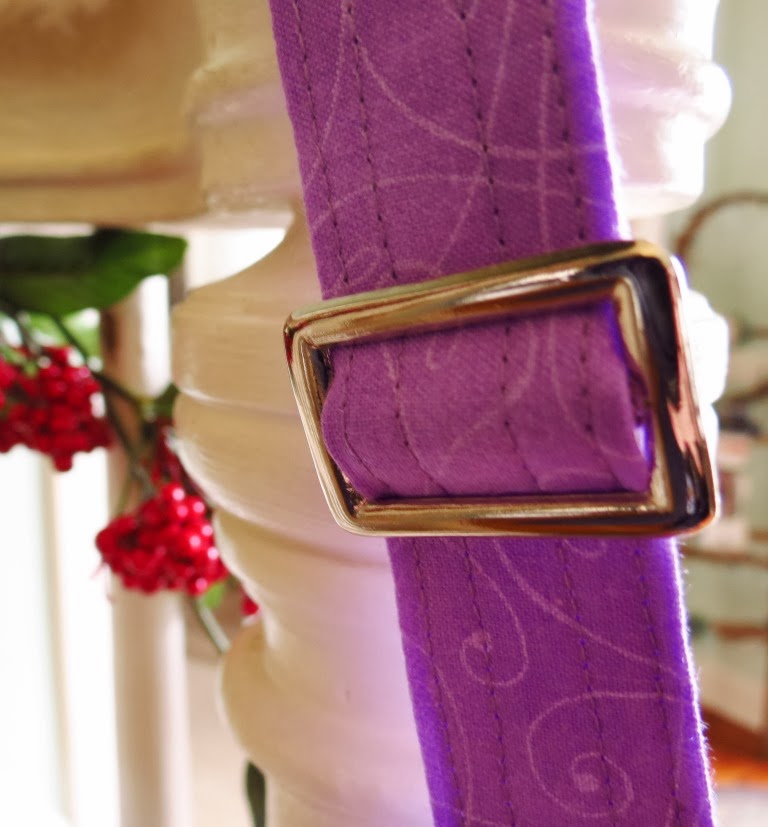 I used woven fusible interfacing on the straps, but no fleece. Normally I pad my straps, but when it's an adjustable strap it makes it quite difficult to work it through the slider. This adjusts nice and easy, but is still sturdy. I'm not too worried about it not being padded as it won't be carrying a lot of weight.

I had a good time with this one. It looks much more complicated due to the details, but it's pretty much a simple tote with a flap. I actually ended up liking this shade of purple, especially with the sparkly hardware. It was so cozy combining quilting with bag-making while ice and sleet pinged off the window and the house smelled like Christmas and I sipped my tea as I stitched. It was such a perfect day for sewing.

I'll be linking up here this week (if I remember, that is):