Sometimes I am ridiculous. (Side note: as I typed that, in my head I heard one of my sisters snort derisively and say "Sometimes!?!" I'm not sure which one though, so I guess it means they would both say that). Anyway, after this travel set was delivered to its quite happy recipient, I was asked to make a weekender in the same fabric. I've made enough bags that I should have felt quite confident in working this out. So what did I do? I bought a pattern. Urrrgghhh, I know, I know. I wish I could say I instantly regretted it, but it took me a long time to even look at the instructions after I bought them, so I couldn't ask for a refund without looking like I was trying to pull something over. It just irks me when someone touts their years and years of sewing experience and then shares something that has elements that make no sense to me as a bag maker. It wasn't until I was in too far to quit that I realized how I could have made this simpler and better. So now I feel I have to make another one just to prove that to myself. See? Ridiculous.

Anyway, here's the bag I made this week (I worked on it in small bits spread out over several days, but it really didn't take me that long to do). 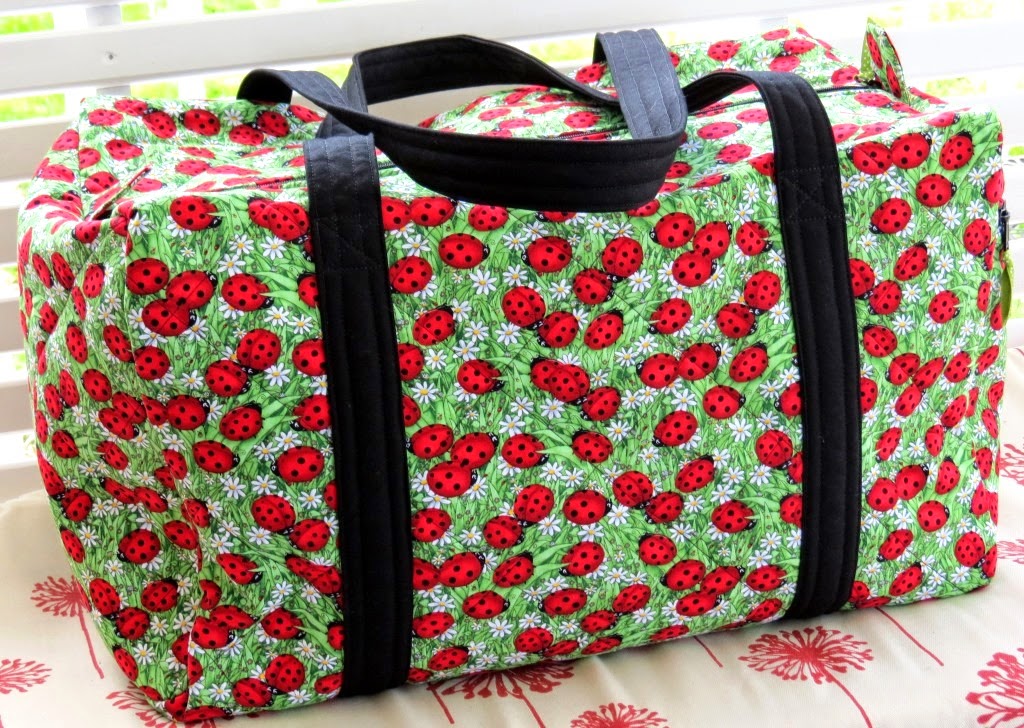 It's about twenty inches wide, and then twelve high and deep. It's a sturdy bag but a bit floppy so I've got it stuffed with afghans so you can see the shape. You can't really see it but I quilted wide squares on this (about three inches square). The pattern has you layer your lining with the exterior and make a quilt. While the prospect of raw edges being visible was making me twitch, I do like that the inside is quilted, too-- 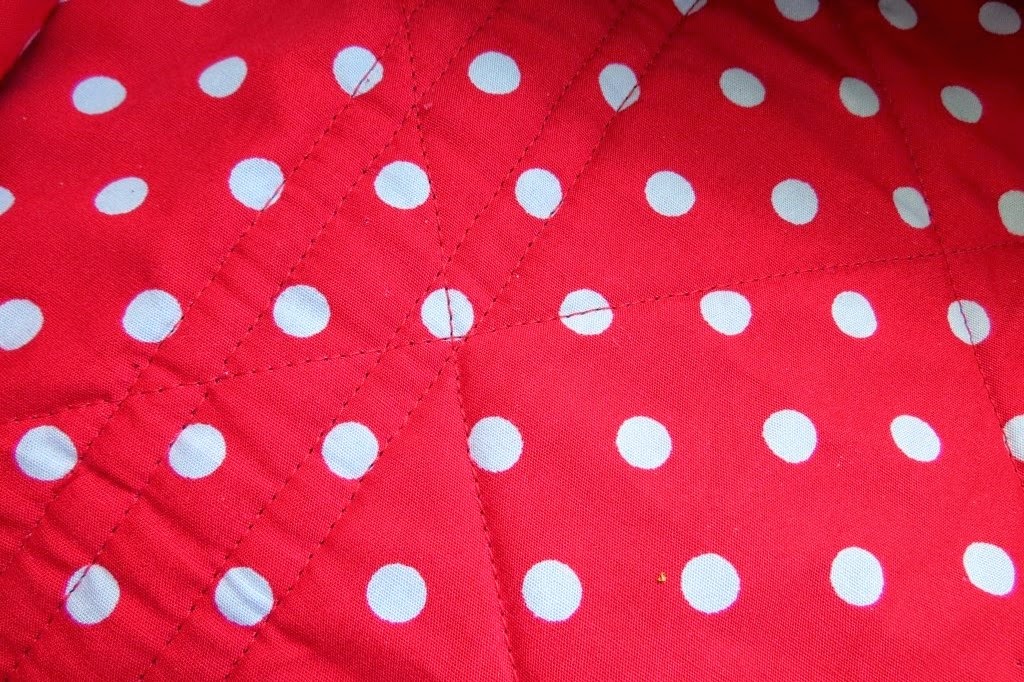 I modified the straps a little as I didn't want to use jute as the pattern called for--I wish I had made them a little wider but they are sturdy and comfortable just the same. They're long enough to sling this over your shoulder, but also short enough that you could carry it in your hand comfortably. 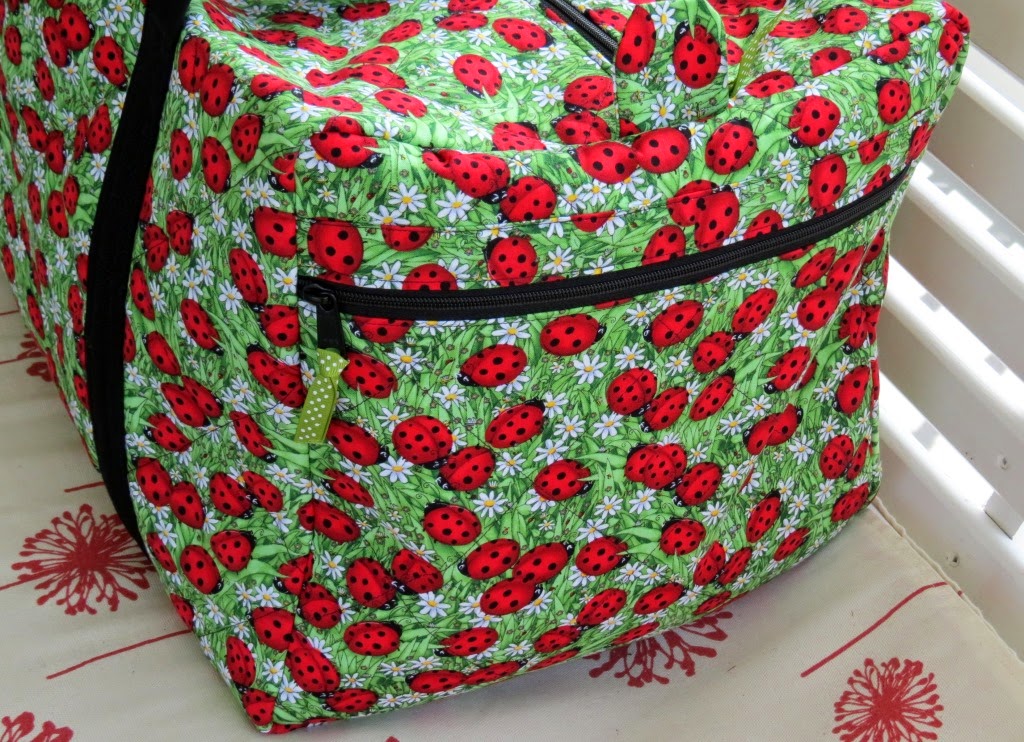 One of the first things that bothered me was the side pocket. The pattern directs you to make it by covering your lovely quilting with this pleated pocket. In seeing finished photos I decided I did not like the look of it, plus it would cover all my quilting work. So I top-stitched my quilt grid on the fabric that was going to be my pocket to keep the look flowing. Having a quilted bag and an unquilted end pocket would be one of those weird things that would irk me. Though I removed the pocket volume by not adding pleats it is still plenty roomy. This bag is basically a huge tube with the two end squares sewn to it. I greatly dislike making things that way as it can be difficult to get things to match up correctly, even when you measure and mark as directed....ahem... 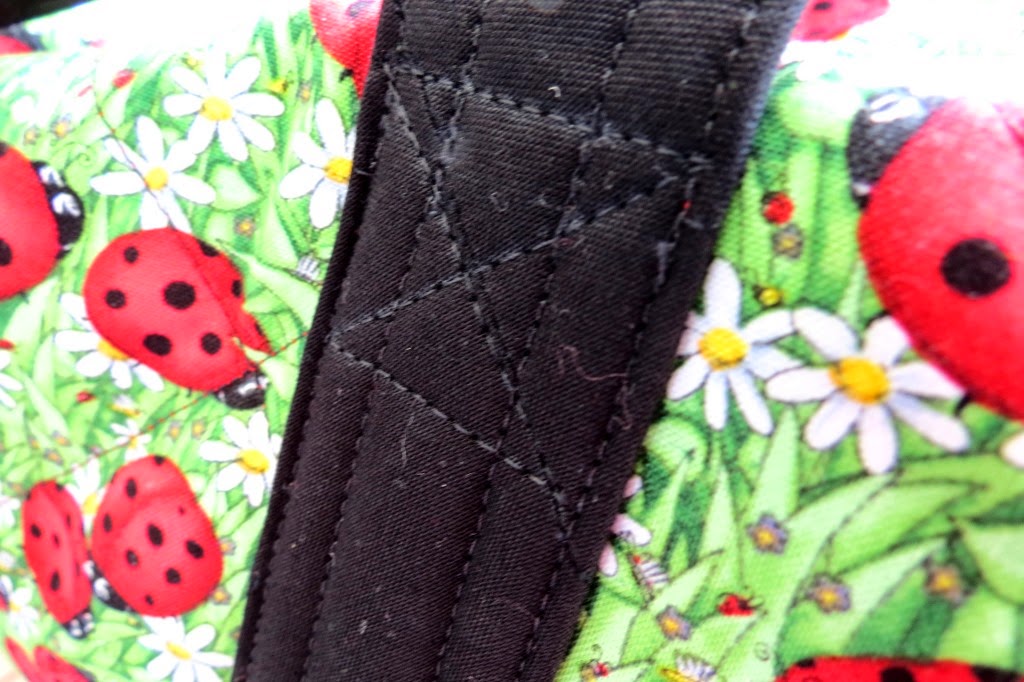 I was going to say how securely those straps are stitched--four lines of stitching plus the boxed x for security...but I think I'll just direct your attention to that lint I need to brush off. I don't want you to think I'm not completely aware of how awful that looks.

And now, here is a pic that shows things I hate about this pattern. As the maker, not the user. As the user I wouldn't bat an eye, but as the seamstress they irk me. 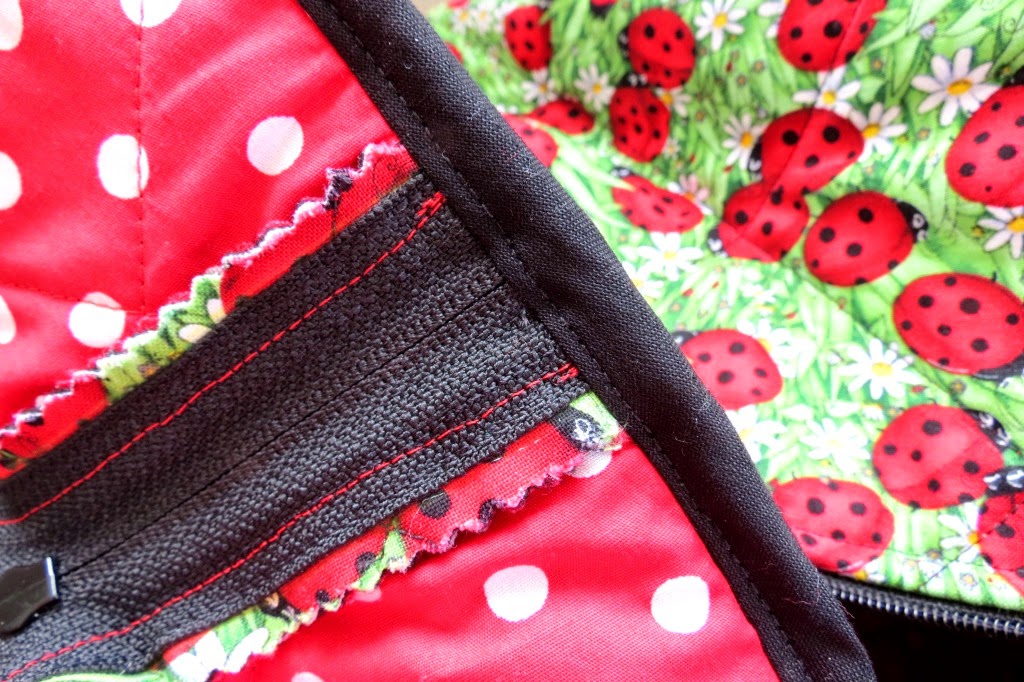 First--excuse the stitching. My big machine started giving me some trouble so I switched to my small one. It was balking a little at the layers and looks worse on this side than the other. But that's not what I want to whine about. I'm not a fan of binding bags unless it's as a decorative feature around the top edge or something like that. I feel that raw edges should be able to be hidden in a bag, and that serging them as directed was not a suitable option for me. I felt like that would cheapen it. So I went with binding, which wasn't fun as there are a few quite thick layers in there (again the machine fought me a little). I considered binding the pieces individually before I sewed them all together, but that would bug me as well, so I did my best at the end and I'm not dissatisfied though it's not my finest. The other thing is that zipper. According to the pattern, on each side of the zipper I should have two inches of fabric that I would then hand-sew to the rest of the bag. Just....no. And why? Why even bother with that extra fabric that makes no sense? So I pinked it. I like the look of pinking and it's in an area where you won't see it, so I'm fine with it. Well after the fact I realized I could have whipped up some bias tape and encased the edges that way, but I was so obsessed with the "WHYYYYY??!?!?!?!" of this pattern that I was in grumbling mode and not thinking mode. 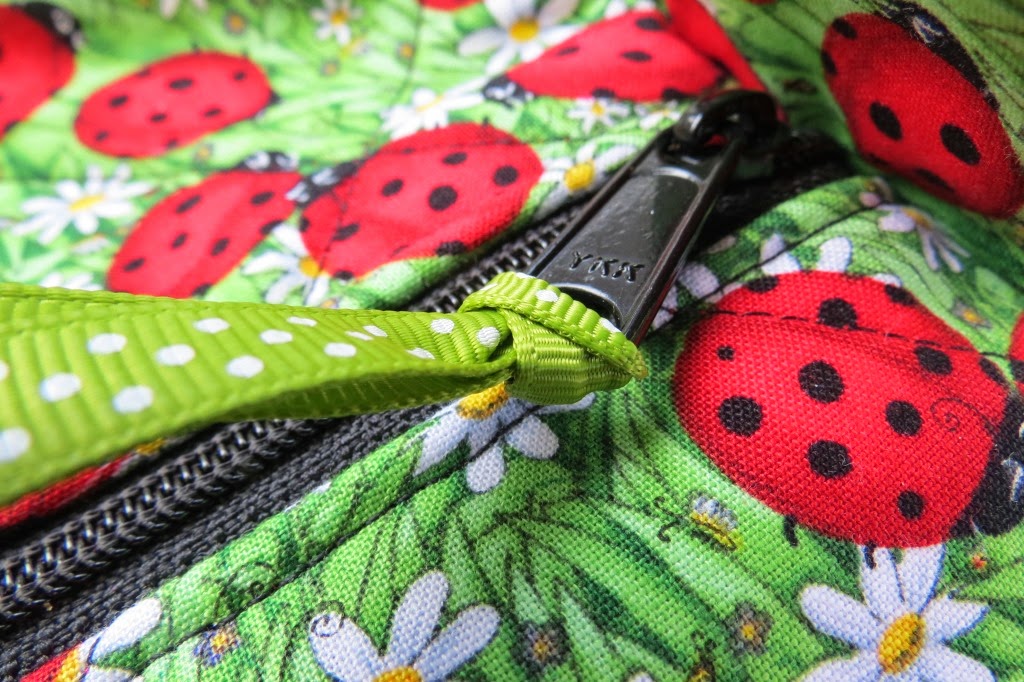 It's hard to see in this photo but just to the right of and behind the zipper you can see a flap of fabric. There is one on each end of the main zipper to serve as pull tabs. I altered the installation of those as the directed method would have led to a broken needle or two

OK, so all's well that ends well. Any gripes I have with this bag are with the making process and not with the finished product in any way. It's sturdy, it's roomy, and it's cute. But I think in the future I'll just be doing my own thing. Because then I'll have no one to blame but myself. Which is also true in this situation, but I'm choosing to ignore that fact right now. Especially since I could have followed my own instructions and been much happier with the outcome...
From the convoluted brain of Bethany at 7:00 AM