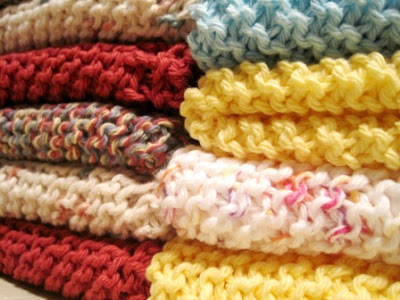 The first thing I learned to knit was the humble dishcloth. It was a very simple pattern that my grandma showed me one evening over Christmas vacation. I can make them without even looking now (as a matter of fact--this is what I've been doing to feel productive while I'm vegging out and watching 'Lost' DVDs), but that first one made my fingers hurt for days. I couldn't even begin to tell you how many of these I've made over the past few years, as they're one of the things I get asked for the most. I've tried other patterns but they're a little too involved for something that's going to wipe up messes and occasionally end up in the garbage disposal.

I've looked online for this pattern, but I don't even know what it's called so I've had no luck finding it. I've seen pictures of it, so I know it's out there somewhere. Just in case I have any knitters following along, I thought I'd share the pattern here. It's really not difficult to do, and a few of them together make a really nice gift. Plus it's something to keep your hands busy during TV time--and off of the munchies (bonus!). 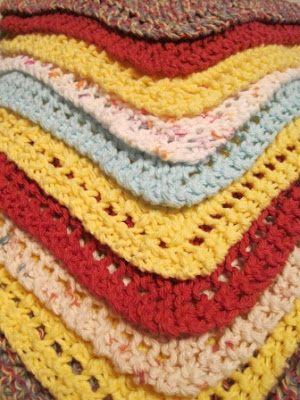 These are knit on the diagonal--other than the knit stitch you only need to know a yarn over increase, and a knit two together decrease. I use Lilly's Sugar 'n Cream yarn for these--the colors are endless, it knits up nicely, and washes well. I also use #9 needles.

1.  Cast on 4 stitches.
2.  Knit a row. Knit another row (for stability). You're still at 4 stitches.
3.  Knit 2 stitches. Yarn over. Knit the rest of the row.
4.  Repeat step 3 over and over again. Each row should have one more stitch than the one below. You'll begin to see a triangle developing. I usually go up to 48-50 stitches before I begin to decrease. 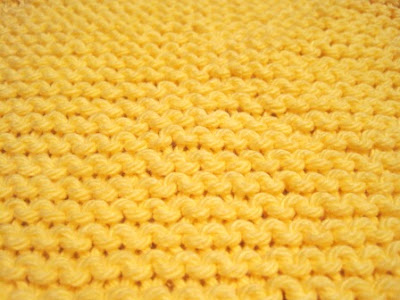 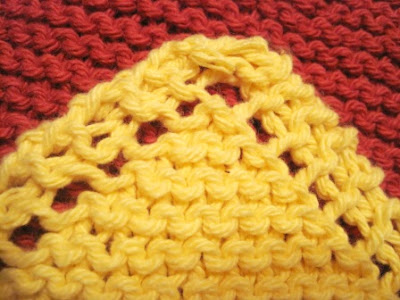 7. When you get down to 4 stitches, bind off. Weave in your ends. Go wash some dishes. 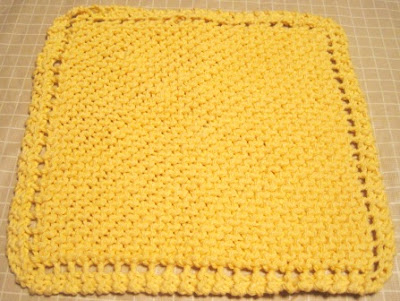 If you look close you can see the stitches running on the diagonal instead of straight across. The yarn overs also create that nifty border.
If you're new to knitting and need a stitch refresher (or if you want to learn how to knit), click here.
Have fun!

OH! One other thing--I've got a nice little giveaway planned in the very near future, so stay tuned for that announcement!
From the convoluted brain of Bethany at 8:19 PM