My sister Rachel asked me to make her a plaid wool bag a few months ago after she saw this one, and I'm just now getting around to making her one. I needed to rework it a bit since she didn't like that style of pleat, and she wanted it to be a bit larger. I really like the way this one came out--my only concern is that it might not be as large as I thought it would be. This baby is still pretty roomy, though--looks can be deceiving, doncha know... 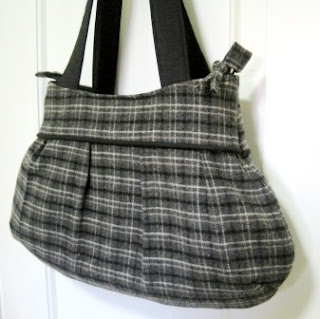 It has a bit of a softer look than the other one, and has a lusciously curvy bottom (I modeled it after myself--hahahaha...just kidding) 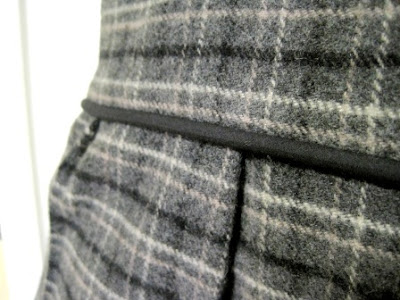 The piping on this one came out the best of my three piped bags. I cut my fabric on the bias this time instead of on the straight-of-grain--it makes all the difference in the world. 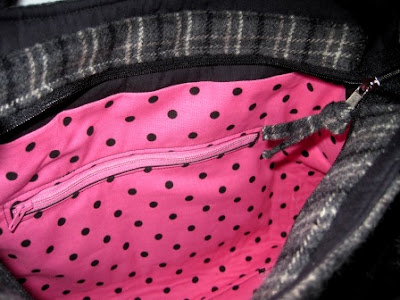 The lining is my favorite--I had just enough of this left over. I don't like lining my bags in black, so this was a fun alternative.
I had to remake this bag, ripping it out until almost the beginning. The outside yoke was too small and didn't line up right so I fixed that even though I could have gotten away with it. Otherwise, there were no other adjustments I'd make to my chicken-scratch pattern. But I committed a huge bag sin that I didn't notice until almost the last stitch--I forgot about the interfacing. The bag still felt nice and would have been sturdy enough, I'm sure, but it didn't have that structured look that I like them to have. So I added some fusible fleece and it's just so much better now. Best part? Didn't have to buy a single thing for this adventure. I'm sewing through that stash, one piece at a time. My fingers are raw from picking stitches, but it's worth it because it just got the seal of approval from my other sister as I'm writing this--true story. She wants one too. So does my mom. The line forms on the right, ladies :)
And the name? I like when bags have names, but I don't like when it's a girl's name or something. So in naming this one for the sister who requested it, I named it after something she used to say when she was a wee 'un (and I mean wee)--she used to call soda 'loot loot' and this bag is big enough to stash all your loot, so there you have it. The Loot Loot bag. A.K.A. The Rachel.
Happy trails!
Have you entered my giveaway?  Click here for the details--you've got until November 11 to enter!

From the convoluted brain of Bethany at 7:13 PM