All of my sewing projects this weekend were unintentionally orange. Well, I meant them to be orange but I didn't realize they were all orange until I looked at the pictures. Since it's just some basic stuff I don't have much to say, so I'll get to the pictures. 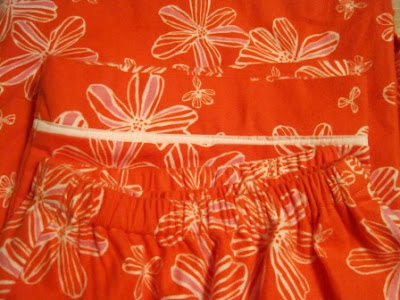 First up are some flannel loungers. The fabric is a delightful flannel from Robert Kaufman that I found online.
The last time I made these pants the lady at the cutting counter told me I didn't need as much fabric as I was buying. I bought it anyway, and in the end felt like she was correct. So when I bought this time I took her advice and ended up kicking myself because I was short a bit. The intended recipient of these is pretty tall, so I needed a bit of extra length. Hence the cuff with the bit of white bias tape for some contrast. They ended up being cute but I have a future annoyance along these lines--I bought the same amount of fabric in 4 different types of flannel for Christmas PJs for my mom and sisters and me. All of us are tall, so I will need to add a cuff to each. It's simple to do and doesn't take too much time. But the annoying thing is that I made the same mistake so many times due to another's flawed advice. Lesson learned. But I got to use my serger and that's always fun, so woohoo for silver linings. 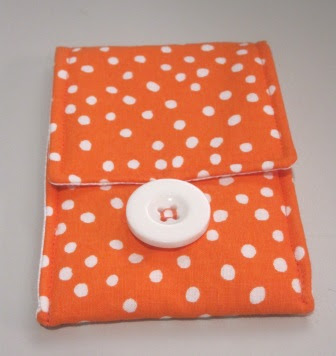 This is an iPod or small gadget case from a tutorial I found here at Sew Mama Sew!
This was super easy and works up cute and sturdy. I cut it thinner than the directions called for so it ended up being a snug fit, so the next time I'll leave it alone. You can make it using fat quarters or some scrap strips of fabric. Or, of course, patchwork. Which I might try... One tip: if you try this tutorial figure out where your button will be before you sew the second side closed and sew it on then--otherwise you'll be adding to the swear jar or ripping your stitches out, which is never fun when it's a thicker item. 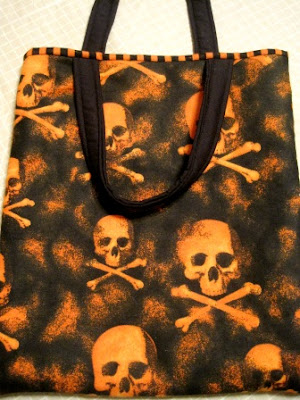 Trick or treating loot bag for my favorite boy. My fabrics are all from Joann's.
Z-man tells me the other day he could use a new bag for Halloween. I may have prompted him and he was in the middle of a video game so he would have said yes to anything. The bag I made him a few years ago is one of my favorite things ever (sadly,no pictures)--the fabrics just worked splendidly. But it was pretty small (it was maybe my second bag I ever made). Now you may think the bag above would be simple--you'd be right, but we're talking about me, so of course I took the simplest thing and goofed it up. It came out too small. I could have reworked something else, but I had a few misgivings about making him a bag anyway (I have no idea why I offered in the first place). He's almost nine, and unless I make it out of something plain and black I feel like it's just going to be girly. I'm probably overthinking it, but the last thing I want is for him to feel uncomfortable carrying it but doing it anyway just because his auntie made it. So amongst my shopping travels today I picked up a few more bags so he'd have options (they're so inexpensive I was out only a couple dollars for a few of them). I spread them all out, and he said without even looking "I'll take the largest one." I asked if he minded if I gave the one I made for him to another little boy I know (my friend's son who he met when I fixed his pillow for him a few weeks ago--he's 3 so this would be more suited to his size), and of course he didn't care. He said "I don't even really like Halloween." And oh, how I stressed over this!
Finally my favorite thing of the weekend: 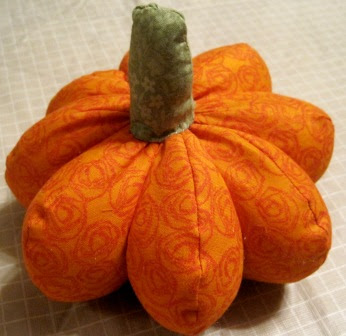 A super adorable stuffed pumpkin!
I saw a large version of this in a quilt shop a few weeks ago and thought "Hmph...I can make that." I promptly found out I had no idea how it was put together so I turned to Google for help. I ended up using this tutorial.   I enlarged their template about 75 percent. I would have gone much larger but I was working with limited fabric so I had to go with what would fit. This was pretty neat to put together--I didn't get where it was going until I had most of the segments sewn together. I am not good at stuffing things so there's a bit left to be desired there, and closing up the top and bottom holes was a little fiddly (I ended up sewing long gathering stitches and pulling it in tight so I could sew a straight line across to close it off). You end up stuffing it through one of those segments so it's a little hard to get even. My mother loved it so it's hers; she put it in the living room and it looks pretty cute, actually. Sometimes you have to let the perfectionist part of your brain take a break and realize that some things are ok with a little homemade-ness about them.
I am now officially out of orange fabric. I'm feeling like it's a jinx color for me--have you noticed that every one of my projects from this weekend had some sort of issue? But I guess it's a good thing that only I can tell what they are (at least that's what my mumsy tells me) until I write a post wherein I blab to the world about said issues.
In stark contrast to my opening paragraph I guess I did have something to say after all...
Have a marvelous week!

I'm linking up to these link parties: join the fun!!

From the convoluted brain of Bethany at 11:21 PM