I think I had too many imaginary blooming snowballs, because my drunkard's path is a little too sober. Yeah, try and figure that one out. I have no idea what I just wrote. I made one boo-boo but it's not really one because it looks fine and didn't make anything go off-kilter, so it looks different than it's supposed to be but it's still a drunkard's path block, and I can probably make a run-on sentence out of anything if I tried. Phew...

So my mistake? I'm not entirely sure. I just think it's wrong because I couldn't make it look like any of the samples. Or maybe you need more blocks to make it look inebriated. But it's also entirely possible I'm shape-challenged. Either way, though, I like it. 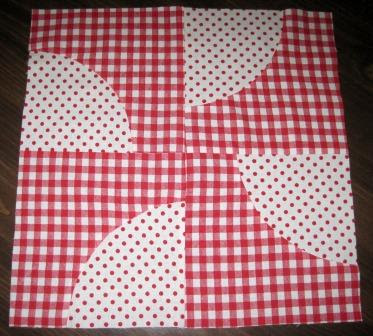 To me it looks like four little gingham boots walking in a circle, so I guess it is kind of a drunkard's path, just walking in circles through a polka dot blizzard. My curves came out nice and sweet this time too: 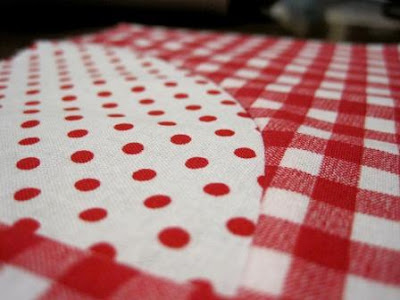 Because I did a Google search for it I'll probably have the Feds at my door, BUT I had a few moments of intense concern that this block resembled a certain...historical symbol representing hatred and intolerance (but originally did not mean that until a certain group used it to represent its twisted view on mankind). I figured if it too closely resembled that...symbol I'd redo the whole thing, but it doesn't actually look like that so a redo was not required for cultural sensitivity purposes. If you have no idea what I'm talking about then just ignore this paragraph. Even though at this point you've probably already read it, so all I can say is 'sorry.'

I went back to proofread this and my first honest thought was "WTF did I just type?" Hence the title.. But you can't say you weren't warned---'rambly ramblings'--it's right up there in the header.

I'm very looking forward to the weekend--happy happy Friday to you!!!!
From the convoluted brain of Bethany at 9:45 PM