There is no better way to give a gift than by prefacing it with "When are you stopping by so I can get this thing out of my house?" Tee-hee. Just kidding. Sort of. No, seriously. I'm kidding.

One lonely present has sat beneath the Christmas tree (which we are taking down tomorrow, by the way, not that I suspect you care much) for a few weeks, waiting for my sister's friend to stop by. She's having a wee one in a few months, and I wanted to make her a blanket for the little lad. But I wanted to make one that was a little...unconventional.

I've made blankies for friends before, and I sat there at the baby shower and watched blanket after blanket in all sorts of baby colors being unwrapped. It kind of deflates you because you made it with such love and it's going to get lost in the mix. So this time I thought a little further along the timeline. That baby is going to grow. And wee little blankies in blue and white aren't going to cut it anymore. So I made a blanket that would be better for an older little boy. One who will drag it behind him, spill apple juice on it, wipe his snotty nose on it, and cry for it when it's being washed (I hope--that would be super-flattering to future me).

So here's my reveal - 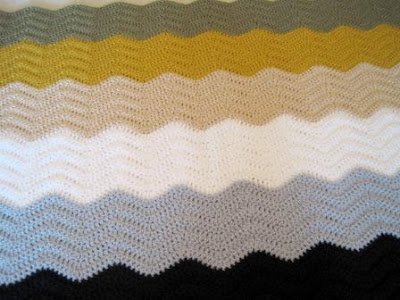 My inspiration came from this project over at the Purl Bee. I was not spending that much money for yarn, so I tried to find comparable colors, which was really hard to do (so thanks to my sister Alicia for helping me with the choosing). I started knitting it up, but it was going to be so thick and stiff I wasn't sure if the baby was supposed to be wrapped in it or use it for karate practice. So I frogged and decided to crochet the ripples instead. 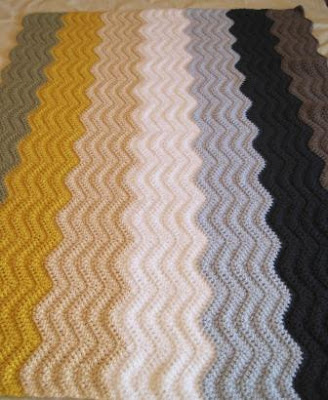 The colors are softer in actuality than this photo depicts. I love those center three colors together. It starts with olivey green, then mustard yellow, tan, white, silver blue, navy blue (though it looks black), and brown. Because I switched up the pattern from knit to crochet I wasn't entirely sure how it was going to go. It ended up quite wide and fairly short (perfect for wrapping baby), or, if you turn it, long and narrow (perfect for snuggling under). And that, my friends, is how you turn an "I didn't plan it quite like that" into a design feature. I'm just absolutely in love with the look of those ripples. 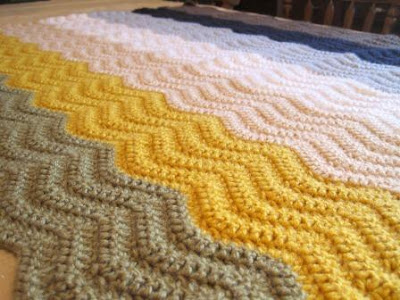 This was a pleasure from start to finish to crochet. I knew the pattern, had the colors laid out, and was very excited about it. Those three factors together are the trifecta for fun stitchery. 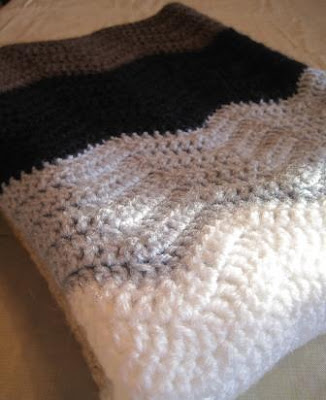 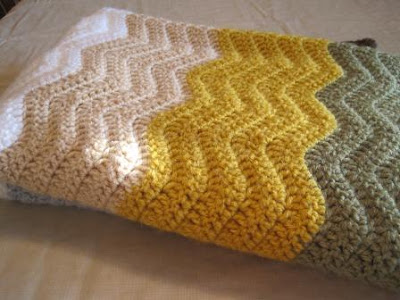 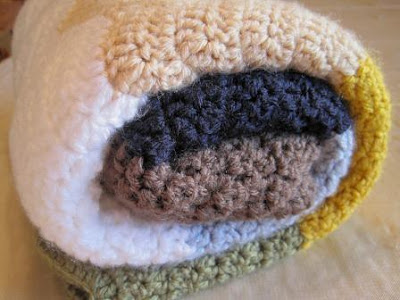 So, Amanda, I hope you love it. I hope it keeps the kiddo cozy. I hope not one shred of it exists by the time he enters junior high. But I do hope he doesn't puke on it. Because that's just gross.

I have one day left of vacation and two things left to accomplish: take down the tree, and sew up my next quilt block. Oh, and a third--start whining about how I don't want to go back to work. Later, amigos!!