La Nina Made Me Do It

I love snow. I adore it. I long for it. It keeps winter interesting. I don't like 18 inches in a storm. About six is good--it makes everything quiet and pretty, it isn't impossible to shovel...it's a good amount. Due to stupid weather patterns this year it looks like we won't be seeing many flakes, if any at all (which I guess is fine since for the past few years we got hit with a few hefty storms). So I had to take matters into my own hands and make my own snow. It's inside too, which is better because I don't have to bundle up to see it.

This was maybe one of the easiest things to make ever. It's not even really made so much as hung up... I apologize for the dimmish photos--this window in the kitchen is awful for taking photos near - no matter the time of day or year the lighting just doesn't work. 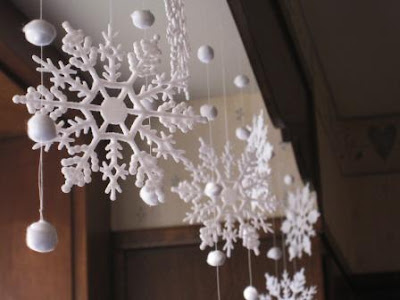 The little puffballs are a few pom-poms strung up on thread. The friction of the two keeps the pom-poms from sliding down. The larger flakes are glitter covered plastic flakes I got at Michael's for a dollar, strung on varying lengths of thread.

The photos are horrible, but when you see it in actuality there is a hint of gift-shop-wiindow-at-Christmas about it. This actually would have been monumentally better in the window over our Christmas decor but better late than never. 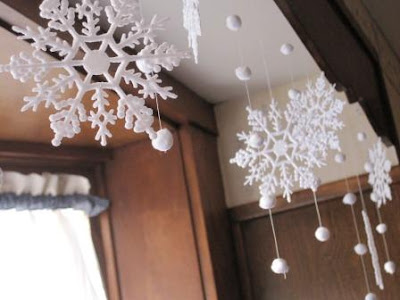 Even my dad came in and said "Wow, that looks really pretty!" He usually doesn't comment unless you're shoving what you made in his face and saying "Look at this and comment!!" (aren't most men like this?). 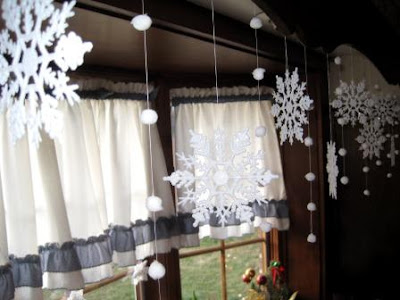 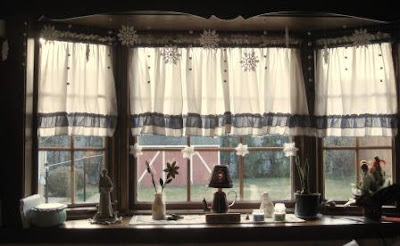 I walked into the kitchen late last night, and the recessed lights set up in the 'ceiling' of the window made it look so pretty - almost as though you were watching snow falling outside, gently lit by a street light. No picture - I couldn't get it to show up without the harsh flash, which would defeat the purpose.

My original plan was to crochet a bunch of snowflakes and hang them up but I got really bored, so I made four. They didn't look that good with the others hanging up there, so they're just stuck to the window right now. 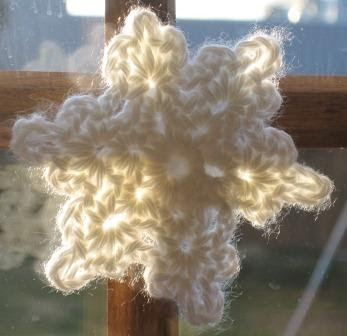 I love how the light shows through, and makes it look like it's glowing :)

I don't really have much else to share. I think I inhaled a pound of glitter this afternoon, and I'm hoping that craft works out well because if it doesn't it's going to be extremely annoying to be coughing up glitter in August. I've been chugging through some sewing, but nothing too fun. My first repeat of my rainbow ripple is done. I've kind of been lazing about all weekend, eating candy, drinking tea, and forcing the dog to snuggle with me. How am I ever going to get up the will to go to work tomorrow?