Over the weekend I was working on what was supposed to be a cute little Valentine's Day project. I had sorted out another tutorial I was working on (you'll get to see that next week), and was in that mode of "I can make ANYthing!" I have been largely uninspired thus far by what is out for V-day crafting. So I got this "bright" sparkly idea... It's not really a fail but it's pushing it...it's definitely a 'not how I imagined it' kind of thing...

Sooo....I bought a package of heart shaped doilies, and some fine red glitter. I had a 3-D heart shaped idea in my head but it was way too messy so I went in another direction. I didn't exactly know WHICH direction but I figured I'd figure it out as I went along. I sprayed Elmer's spray adhesive on the doilies and generously sprinkled them with glitter. My mother said, and this is a direct quote, "You're putting glitter on doilies and calling it a project?" At this point I had no idea what I was really aiming for but I kept plodding along. 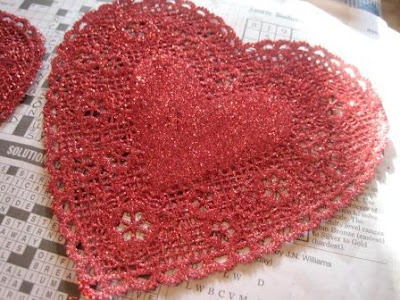 When I have no idea what to do with something I've made a bunch of I will invariably say "I'm going to string it up and make a garland!!" So I took some jute (twine?) and strung them up, and used some cute old-school thumbtacks I found in the junk drawer: 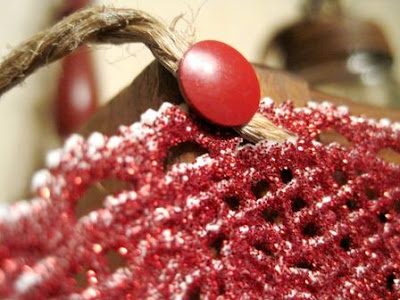 It was too bland. So I wrote some Valentiney sayings on scrapbook paper and pinned them up with miniature red clothespins - 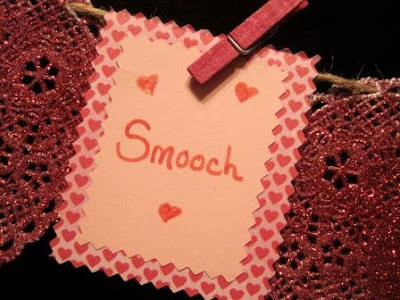 Haha--that was the last one I made--I was running out of ideas. 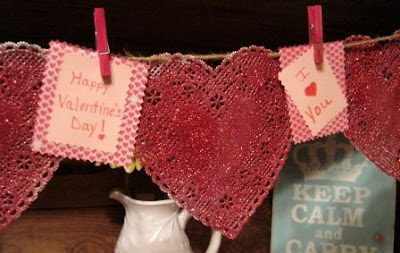 So, yeah...not awful. But not fabulous. The worst part? I had glitter in my underwear and up my nose, I had to soak and scrub my hands forEVer to get the glue and glitter off, and you know what? The FREAKin' glitter is 'raining' off of the hearts. You can see how some of the edges are bare... it's quite annoying. I should have remembered my glitter misadventures from when I was younger. I love the stuff, but it clearly despises me.

How has your crafting been thus far? Had any botched jobs yet?

From the convoluted brain of Bethany at 11:51 PM