A couple months ago I won a gift certificate to the Heather Bailey store in a month-long series of giveaways she hosted. I got some fabric and some paper goods, a nifty gadget, and this cute little kit. I've hardly had any time at all for sewing and making lately, but I really wanted something fun and easy to do. The fact that it's seasonal made it even better, as I adore holiday crafts, especially when I'm limited on time. And it doesn't get much more whimsical than a sock bat, eh? 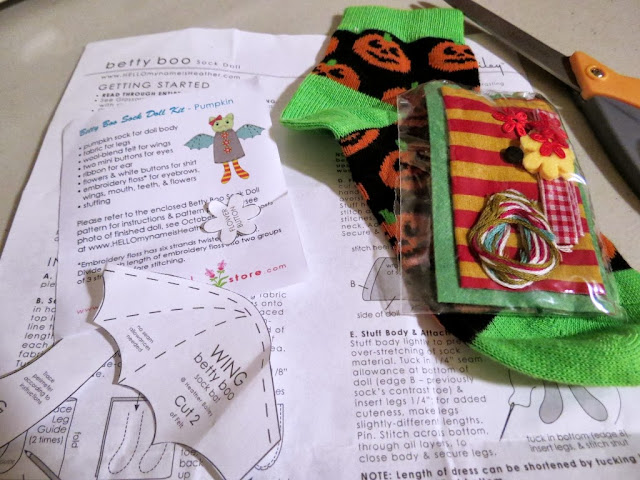 To be honest, if I had received a pair of socks instead of just one, I would have ditched the kit and worn the socks (I love novelty socks :) First you have to make these teeny tiny legs--I stuck them next to a pin for scale. 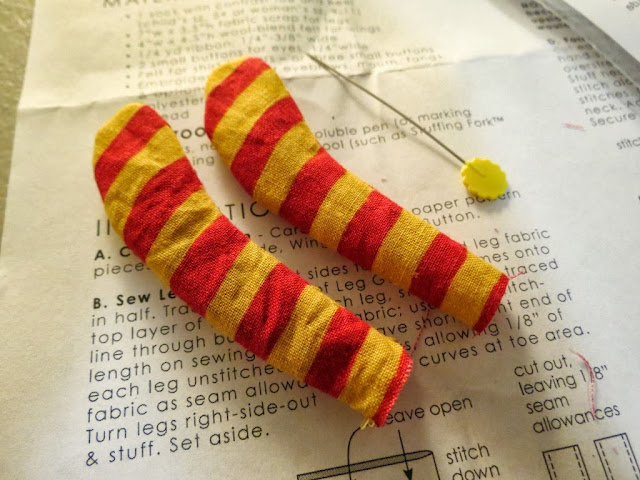 They may be the most difficult thing I have ever turned right side out (which is such a geeky sentence that I know will only make sense to other crafters). Stuffing them was super easy as with my gift cert I bought a stuffing fork. It looks like nothing, but it really makes all the difference in the world. 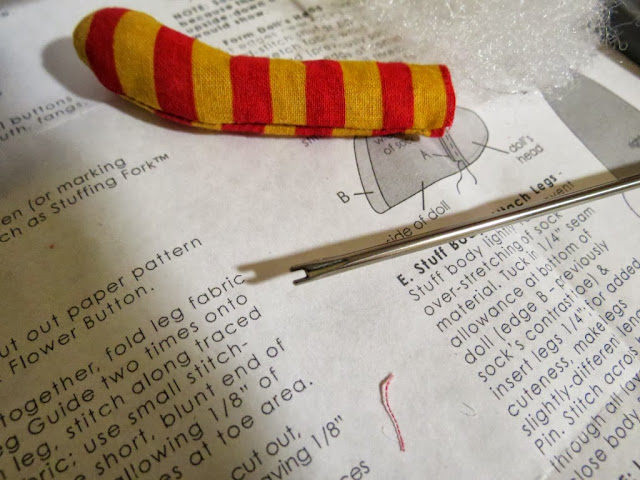 I don't know if it would make any difference for pillows or larger items, but for these tiny things it made stuffing effortless (and I haaaaate stuffing things). You know what was squiggly and annoying? Sewing a cheapo knit sock on a sewing machine. I was feeling really lazy and didn't want to do it by hand but I certainly should have. It all worked out, though. Pretty much. 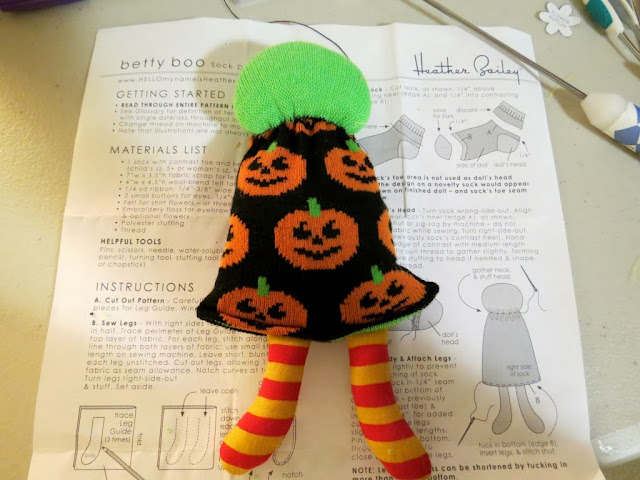 So at this point it's a sock with a few pieces cut off and stitched back together to look like an armless body. My machine ate the remaining sock piece I needed to use for the ears, so I had to use the remaining felt to rig those up. They're kind of my favorite part-- 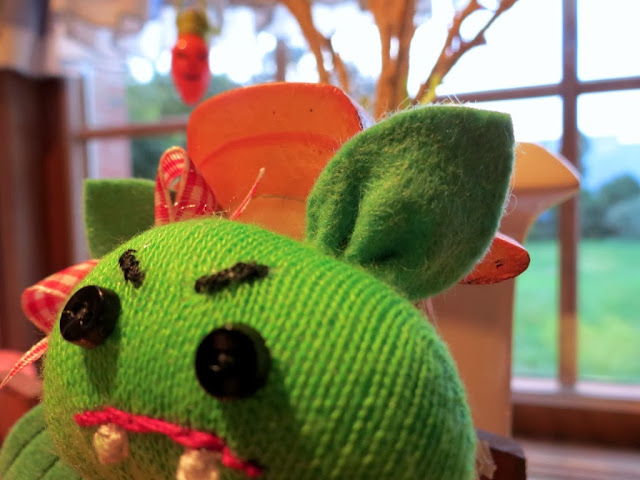 And here's the whole shebang-- 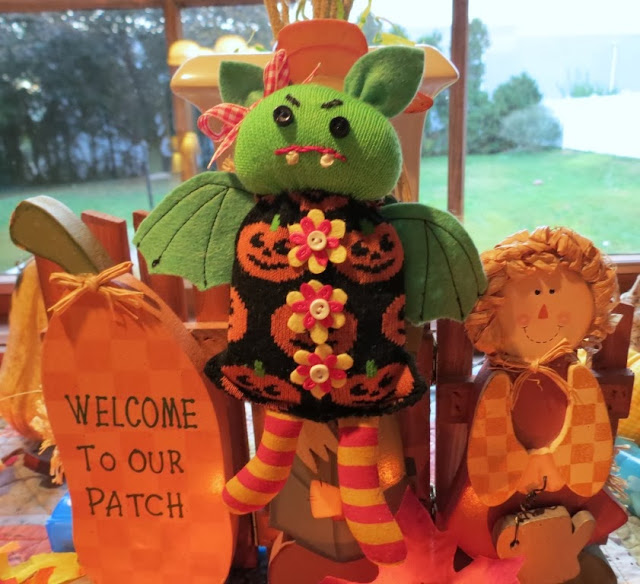 It was a little fiddly trying to sew the buttons and other pieces on to something after it was already stuffed, but the loose knit of the sock made it kind of easy. I love the little buttons on the dress, but they get lost in the busy-ness of the 'dress' fabric. 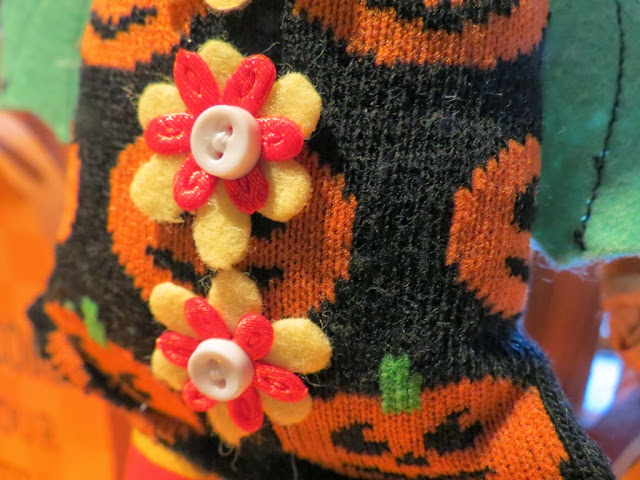 I was so pleased with myself that I tied a perfect little bow that I didn't want to risk messing it up by stitching it on. So even though it was midnight I hauled out the glue gun and tacked it down just so. 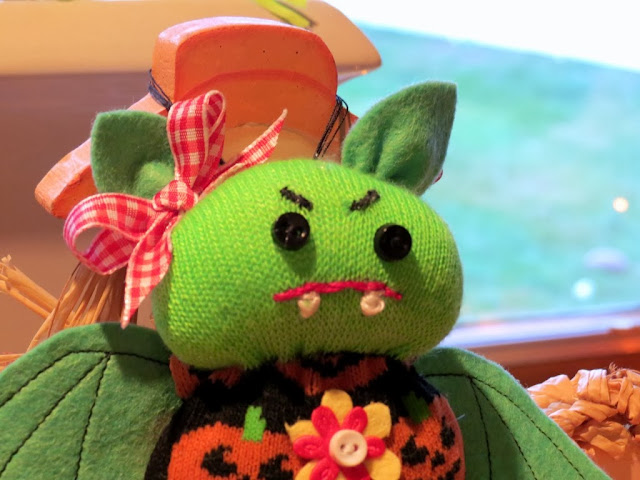 The teeth aren't particularly fangy, but I dig the bushy eyebrows I didn't even realize were happening as I stitched them. While this may not be the neatest bit of stitchery that ever existed, I feel that 'sock bat' is more in keeping with terms like 'crooked wings' and 'stubby fangs' than it is with words like 'neat' and 'perfection' anyway.

OH! Any of you watching the new season of American Horror Story? What do you think? I'm kind of liking it...
From the convoluted brain of Bethany at 11:17 PM