Ahoy ahoy! Remember a few months ago I had shared (here and here) my thoughts on the subscription box service I had signed up for? After being less than enamored with it, I cancelled it and signed up for another. Due to the timing of it all, I didn't receive it until mid-September, and just used it this weekend. This time I signed up for the Brit Kit. Every month you receive a craft kit of who knows what--it might be jewelry making, it might be home decor, who knows.

I had thought this particular craft would be something I could do with Z-man, but Sundays are now for football, and it's some kind of rule that "you can't do arts and crafts when football is on because you have to keep your eye on the stats." So I went ahead and did this one myself. Now, a good blogger would have remembered to take a photo of the kit before they made the craft, so you'll have to imagine a few things--- 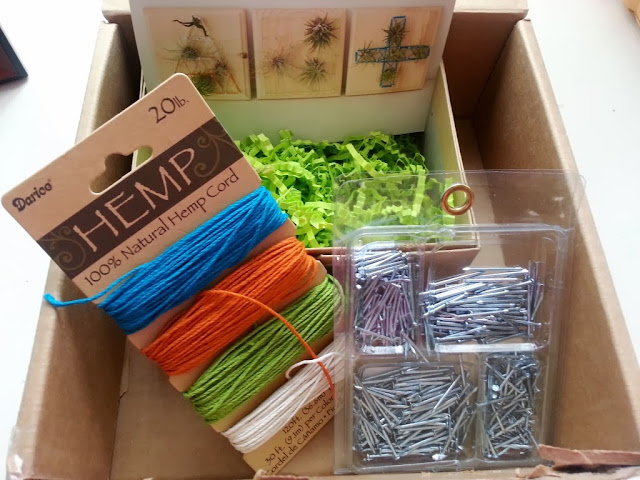 In addition to the above I received three different air plants as well as a square piece of fancy-edged wood.

The point of this craft was to hammer those nails into the board into whatever layout you wanted. I am not imaginative, so I did a grid. I tried to bother everyone as much as possible while I was hammering. I scared the dog, I made my sisters roll their eyes, my mother cringed, and my neighbor turned off her radio. I then handed the miniature bed of nails to Alicia and asked her to do the hemp wrapping for me. Some things I just feel really unmotivated to do, and all that hammering was tiring.

I had put the air plants in water to soak before I started so they were ready to place. I did absolutely no research on air plants, so I have no idea what they are. They look like desert plants that don't really have perceivable roots, but are quite succulent and suck up the water quite swiftly. You don't need to plant them or water them much--once a week you stick them in some water and place them back on your string art. 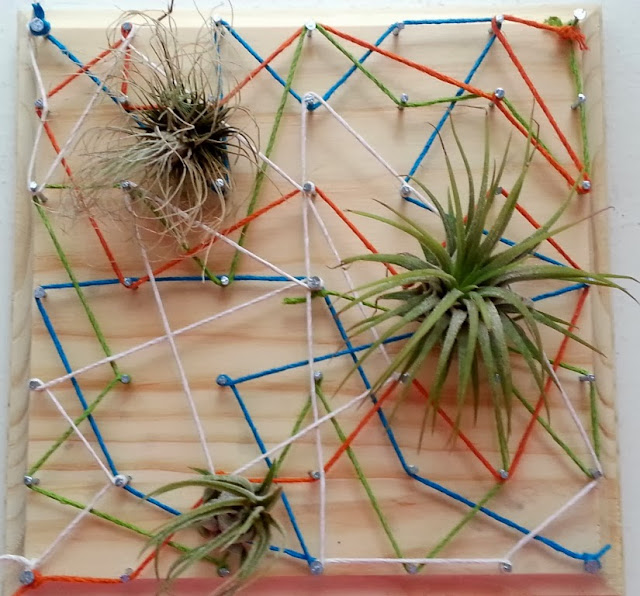 This is kind of just sitting on the windowsill right now as I don't really know what to do with it. I'm not much of a plant person, and I feel a board with randomly hammered nails isn't the safest idea ever concocted. I'm actually kind of glad I didn't do this with Z, as he would have lost interest in about two seconds flat. 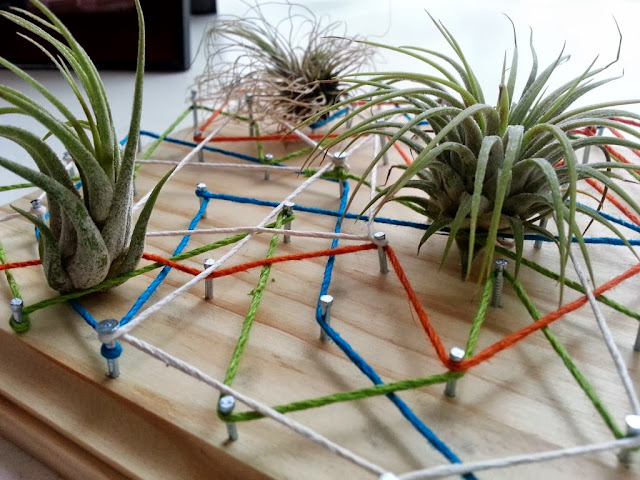 Although I wasn't jumping for joy with the craft itself I did like this box much better. I have a lot of nails and hemp left over for other stuff I may want to nail and wrap. But even if I hadn't made this craft the supplies I received would have been useful for other stuff. I am quite eager to see what I get in my next box, which should be arriving next week. I really do like the surprise element of it, and I'm happier I switched to a craft box instead of the frou-frou pamper yourself in sample sizes kind of stuff. So much more me.

So that's that for now. See you soon!
From the convoluted brain of Bethany at 11:48 PM