A Study in Vintage

Today we'll be looking at some of the things that adorn the halls of this expansive museum. There's going to be a test at the end, so take notes. 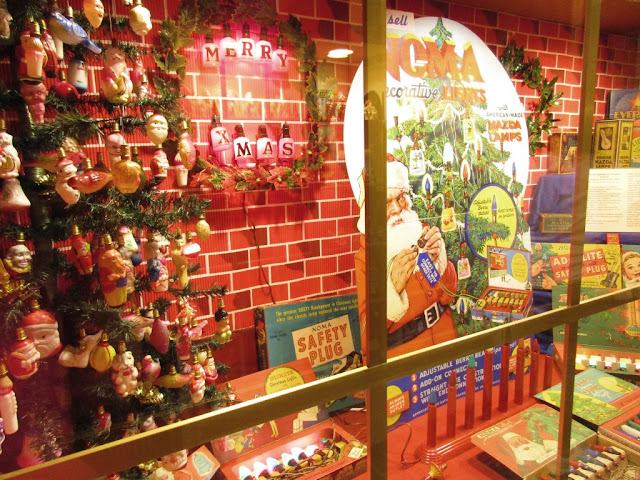 Noma was once the largest manufacturer of holiday lights in the the world, but now the name is just a trademark. The business declined as other companies jumped on the illumination bandwagon, and offered cheaper alternatives. Do you remember those red brick cardboard fireplaces that used to be a decoration in schools when you were still allowed to decorate? You can still buy giant rolls of corrugated brick paper, if you find yourself in such need.

Do you remember several years ago when I shared some of our Christmas decorations, and this little angel was one of them? Well now I know a little more about that bit of cuteness. 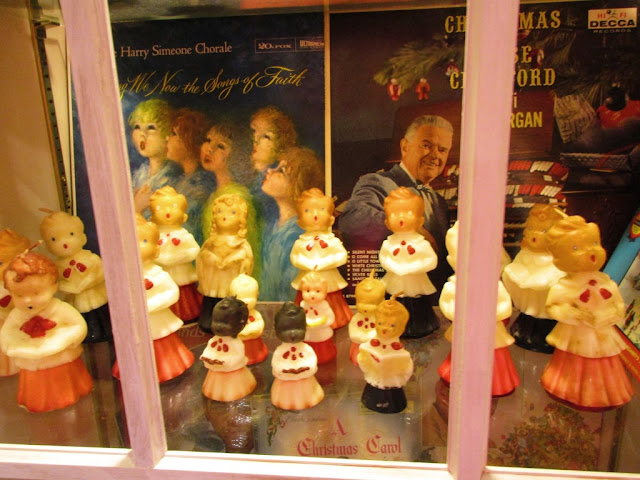 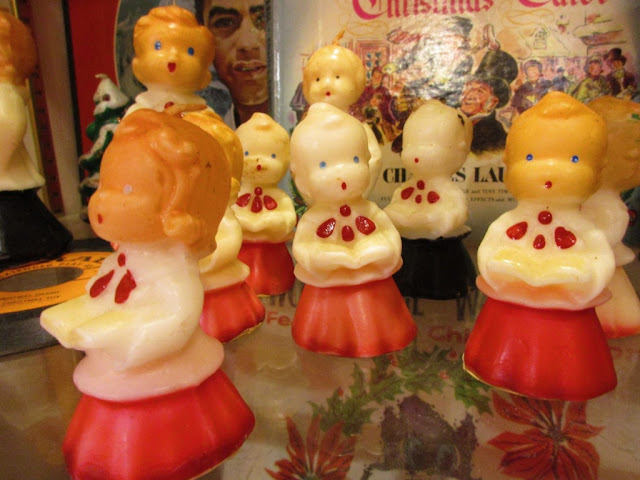 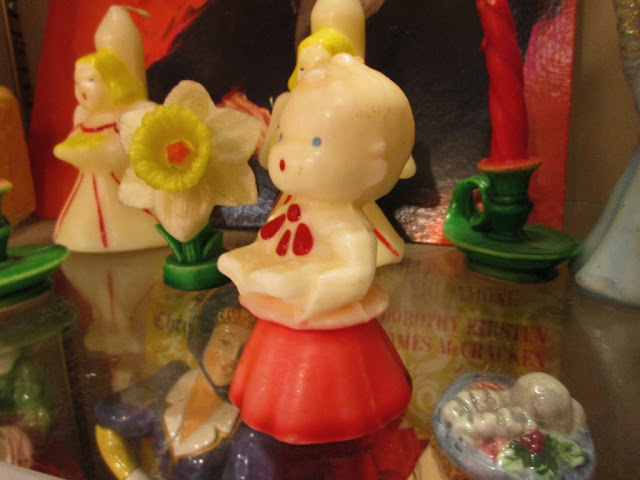 Franklin Gurley and his W&F Manufacturing Company were known for making holiday candles shaped like small figures (Halloween and Christmas being the most popular, even now among collectors). Originally marketed under the Tavern brand, Gurley eventually bought the rights and renamed it the Gurley Novelty Company (if you've got a Gurley and not a repro there should be a sticker on the bottom bearing his name). Anyway, these candles (which, even though they have wicks, were more for decoration and not for burning) were commissioned by the Socony-Vacuum Oil Company (now Exxon-Mobil) as a way to use excess paraffin (a by-product of the oil refinery process). You could get these for a dime at stores from Woolworth's to Macy's. The Vermont Country Store bought the molds, and now sells reproductions. 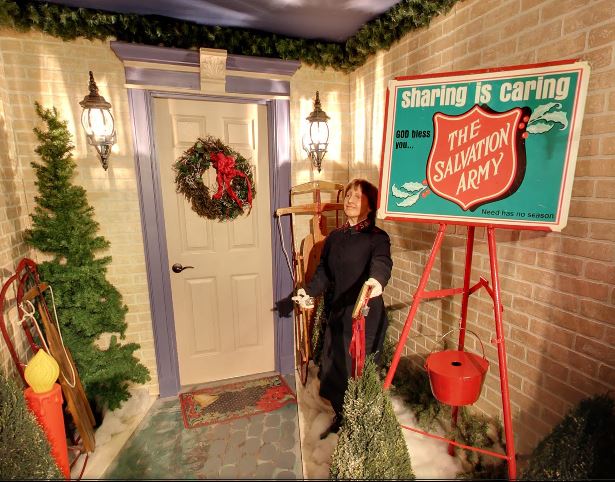 Ah yes, the good old Sally Ann. A global religious organization founded in London that uses volunteer "soldiers" to assist the hungry and the destitute through a variety of programs, the Salvation Army's most recognizable symbol is the red kettle that appears at Christmas time. Volunteer bell-ringers place themselves outside businesses and on street corners to seek donations for the needy. Can't say I'd love it outside my front door, though.

I didn't show any pictures of this, but various Santa figures guide you along the twists and turns of the museum. This guy below might not seem like the Santa you know and love. 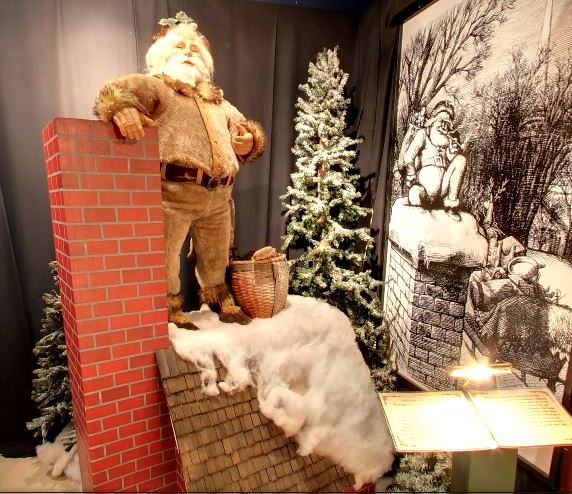 Santa (and all associated figures) were depicted in various forms, from a cloaked old man to a more gnome-like figure, until a few artists gave us the more standard image. Thomas Nast, an artist for Harper's Weekly magazine, gave us the first glimpse of modern Santa Claus when he drew upon his own German heritage of Pelznikel (a bearded, pipe-smoking Santa) to draw a small figure based on Clement Clark Moore's poem, A Visit from Saint Nicholas ("a miniature sleigh and eight tiny reindeer"). He's credited with the fur-trimmed suit, the stocking cap, and that big old belt buckle. 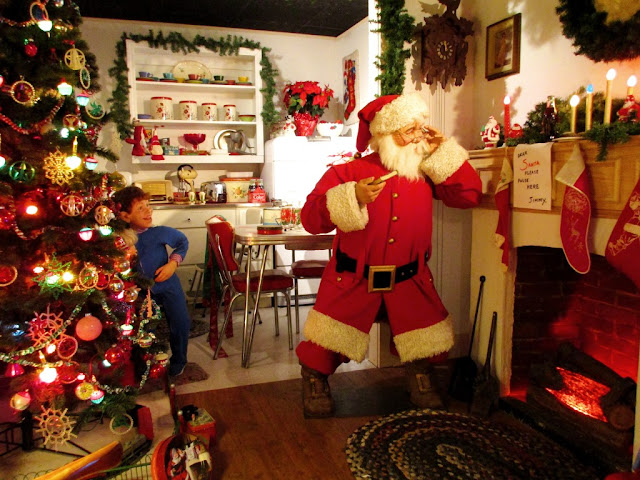 But Haddon Sundblom, an artist for Coca Cola, gave us our most famous version. A human-sized Santa, always dressed in red (color used to be variable, but was often green), with his cherry nose and whatnot, has become the most enduring image of that jolly old fella. And how much do you love that six-pack of Coke on the hutch in the very background? Confession: I pretty much took this picture for the hutch and the canisters sitting on it. And the table and chairs. And the cuckoo clock. 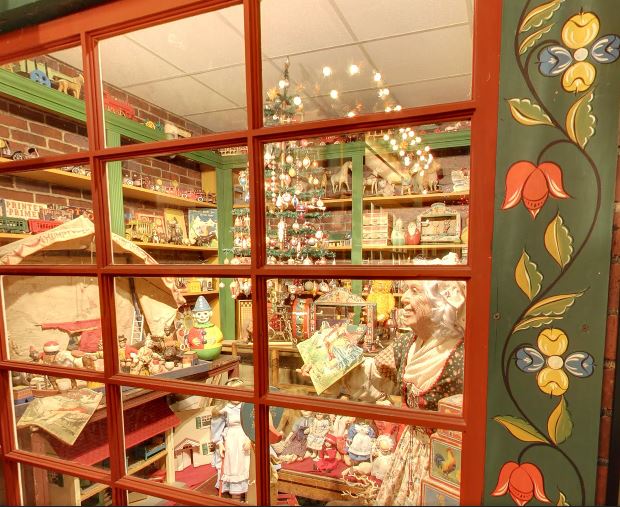 Can you imagine how much fun a toy store like this must have been? Do toy stores like this even exist, or is everything just your basic big-box toy store? I love that store in Home Alone 2 (Duncan's Toy Chest--props to the sissie for remembering that). It should be a law that toy stores look like that. Get on that, Congress. 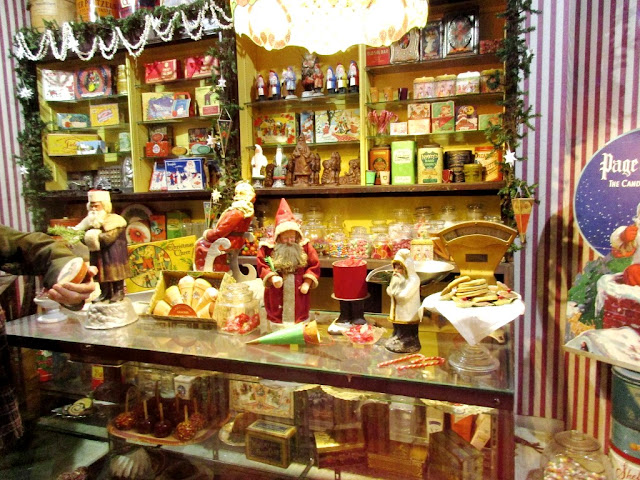 Every year when my sisters and I are making our chocolate-covered pretzels and other goodies, I always think how much fun it would be to work in a good old-fashioned candy shop, with paper bags full of sour balls, and pretty boxes of amazing chocolates, all weighed out and tied up pretty. Why did we let these things become part of the past?

And here we have a bit of fun from my favorite Christmas movie (just edging out A Christmas Carol). 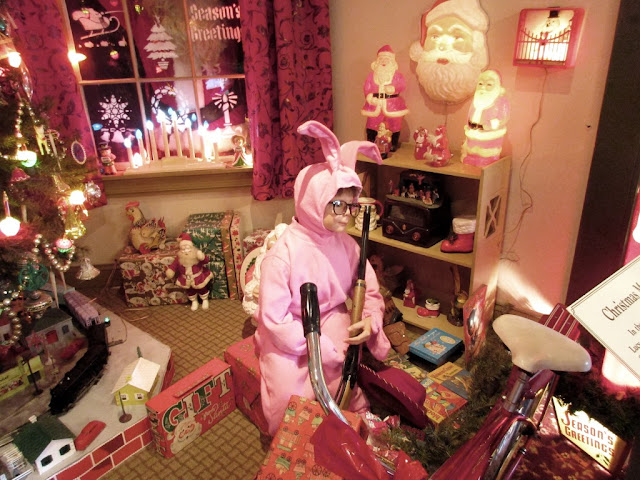 I'm pretty sure my grandma had some of those light-up Santa figures (probably from Woolworth's). And I remember my mom walking around with her stencils and can of spray snow to decorate the glass surfaces in our house. 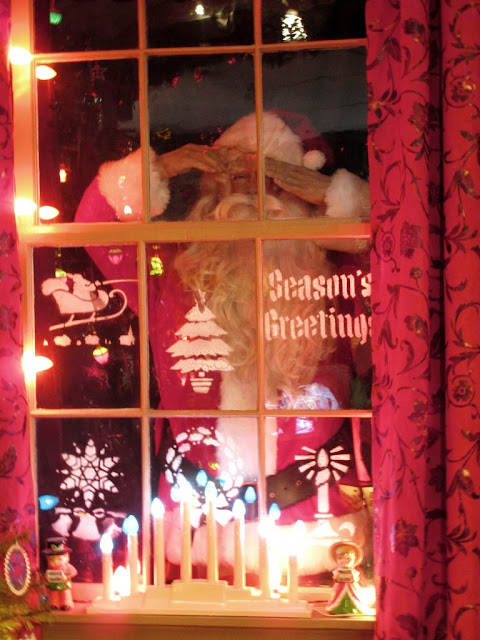 Though Santa peeking in like that is a little creepy. And oh my goodness. I just now noticed something. See those carolers on each side of that candelabra? We've got those!! I don't know where my parents bought them, but they are on the mantle right now. 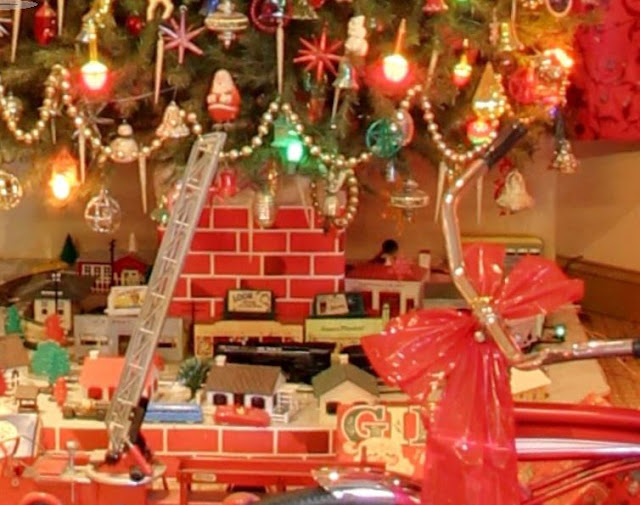 And those spiky ornaments on the tree? We've got some of those, too. Just noticed that. I took this pic for the cardboard chimney-like base for the tree. And that cellophane bow! Remember when colored cellophane was a craft medium? We used to have a Santa made of the stuff, and I remember pulling on it and stretching out the pieces and so on, probably destroying it. I should go back in time and punish myself. It would obviously have been a museum piece now. 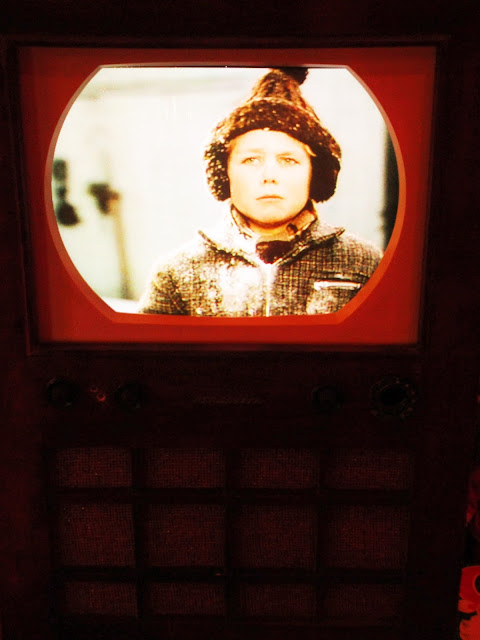 I'm the annoying sibling who wants to watch this all day on Christmas. I don't get why people want to change the channel. Do they not remember childhood? This was playing on a constant loop on a vintage TV set.

So that was kind of a literal tour down memory lane. Only one exhibit left before we head for the exit (was that a collective sigh of "thank goodness" I just heard? Sorry--I just looooooooove Christmas!).
From the convoluted brain of Bethany at 4:00 PM