Around Some of the World

Hello, kids! Ready to start the tour? Flash photography is permitted but won't help (my pictures aren't as marvelous as I'd like, but at least it wasn't my fault. Ahem. OK. So, ready to go on a tour of the National Christmas Center?

The first room is the Christmas Around the World exhibit. These displays do seem to get changed up now and then, so we'll just go with what was on display this year or I could literally be here for a week as I love exploring the lore of other countries. 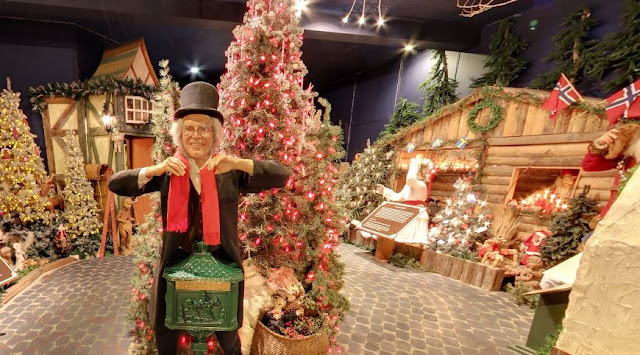 Is this fella positively Dickensian, or what? Do you think he's supposed to be Bob Cratchit? Let's pretend he is.

You can see the little houses from different countries decorated in the background. I have always loved every single aspect of Christmas, from the traditions I grew up with, to those I've learned about through books, the internet, and public television. If I were to decide one year to incorporate all of those around-the-world traditions, I'm pretty sure I could stretch Christmas out to about a ten month celebration. 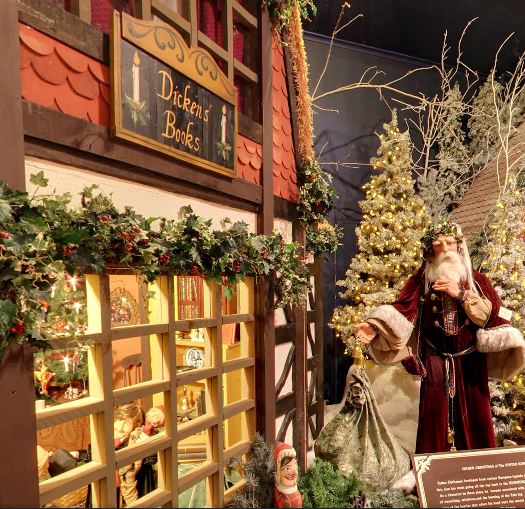 Admit it. You want to go into that book store with me, don't you?

In merry old England, Father Christmas brings the presents on Christmas Eve. They are left in stockings by the fire/tree, or are waiting for the children by their beds in the morning (the first time I heard that was in a Paddington Bear story, and I thought it ludicrous--I would have just stayed in my bedroom playing all day). Just like here in the States, children write letters to FC, and I hope some of them burn them in the fireplace so their wishes rise out of the chimney with the smoke, which Santa then reads. Doesn't that sound just delightful? Christmas trees are, of course, a centerpiece of the home--they were introduced by Prince Albert (Queen Victoria's husband, who was German). And I'm not sure if yule logs are still lit, but traditionally the current year's yule log was lit with a piece of the log from the year before (and as I wrote this, all I could think of was that scene in Christmas Vacation where Clark Griswold is in the department store with the sexy salesgirl going "As in yule. Yule log. Not that I have a log. Not in the sense that you think I said I did..."). 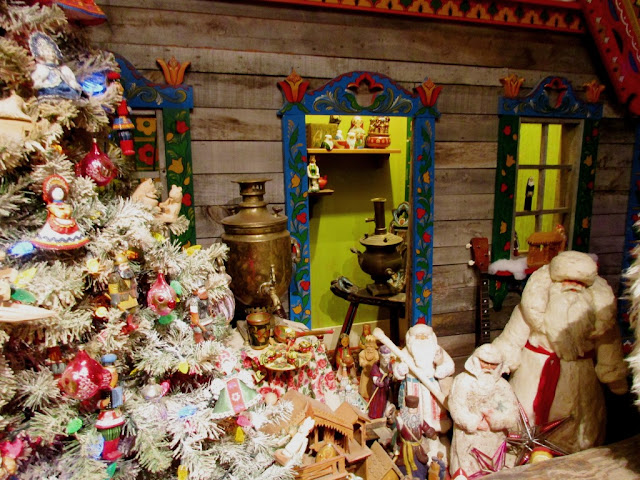 Welcome to Russia! During the long Soviet era, Christmas was not celebrated much. Now, due to the Russian Orthodox church following the Julian calendar for religious observations, Christmas is usually not celebrated until January 7th (unless you're Catholic, of course). Russian advent, then, goes until January 6th--a full forty days. More important than Christmas are the New Year celebrations (which take place on January 10th--Julian calendar strikes again!), because that is when Father Frost (seriously great name!) brings presents to the children. This was probably my favorite display in this particular room--the colorful ornaments on the tree, the matryoshka that you can see at the top/center of the door, and oh-my-goodness the door frame! I wanted to rip it off and bring it home with me! If you are curious what those metal vessels are--those are samovars. They are heated metal containers used to boil water, usually for tea. And I imagine that in snowy Russia a lot of tea is consumed. Oh, Germany, with your Christmas trees, and advent calendars with teeny presents, and your scary elves. I'm not kidding--we're all familiar with the red and green clad pointy-eared munchkins as shown above. But Germany is also home to the legend of Krampus--a horned demon who helps Santa Claus by threatening bad children. I think there's a movie coming out by that name, I'm not sure. I think I'll pass that one up, though. Christmas trees are very important to the German home, first showing up in the middle ages. I remember reading that Martin Luther got the idea for putting candles on trees (with a bucket of water nearby!) when he was walking home one frosty night and saw the stars twinkling through the fir trees. He saw it as a sign of God's glory, and wanted to replicate it. 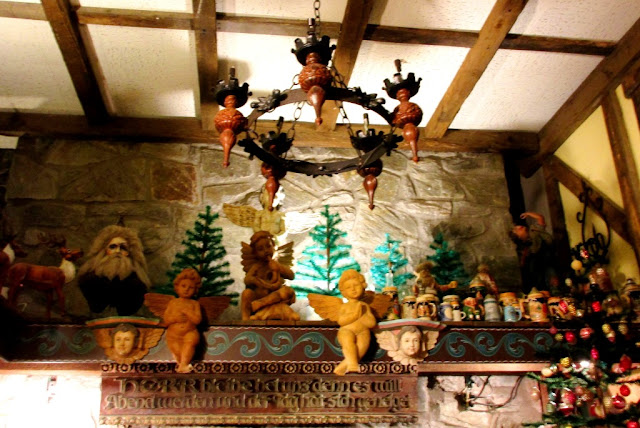 If anyone speaks German and can make out that sign I'd love to know what it says. Also let me know if it's not German, haha). I mainly took this picture for the ceiling and the light fixture.

One of the most famous aspects of Christmas in Germany is the Christmas market. If you've been around a while you may remember I wrote about the one in Philadelphia here. It's a place where wooden stalls are weighed down by ornaments and decorations and food like mulled wine and gingerbread. Perhaps the most famous Christkindl market is the one in Nuremburg. One thing is held in common no matter where the market is--the Christkind officially opens the market and welcomes in the season of advent. 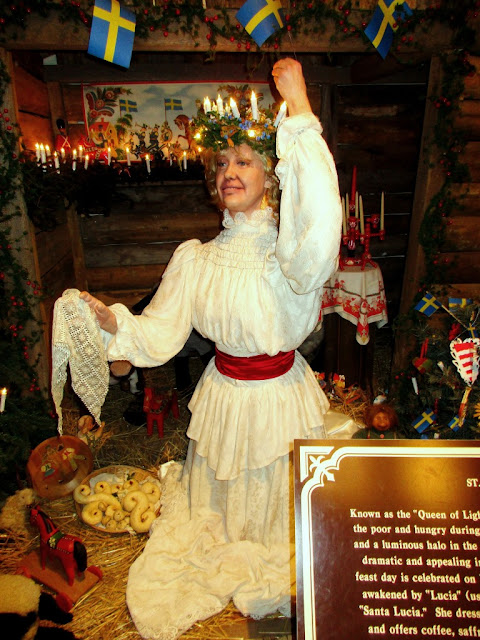 One of the biggest Swedish traditions is St. Lucia's Day on December 13th. Saint Lucia was a young Christian martyr. The common tale is that she would secretly bring food to those persecuted for their faith and hiding out in Rome under the city. She would wear a wreath of candles on her head, leaving both hands free to carry things. In the old Julian calendar (there it is again!) Winter Solstice happened on December 13th, so the pagan festival of lights evolved into St. Lucia's Day (Lucia means light, so that's quite fitting, eh?). From what I've read, the 'prettiest' girl in the family (though I imagine the duties rotate so as not to crush self-esteem) wears a white dress with a red sash, places a wreath of candles on her head, and goes from room to room singing carols to waken those still asleep. In Sweden, Christmas lasts a month--that's an old saying, and it's true, as Christmas ends on January 13th. Gifts might be brought by Santa, or by little elves called tomte (or nisse, right next door in Norway). 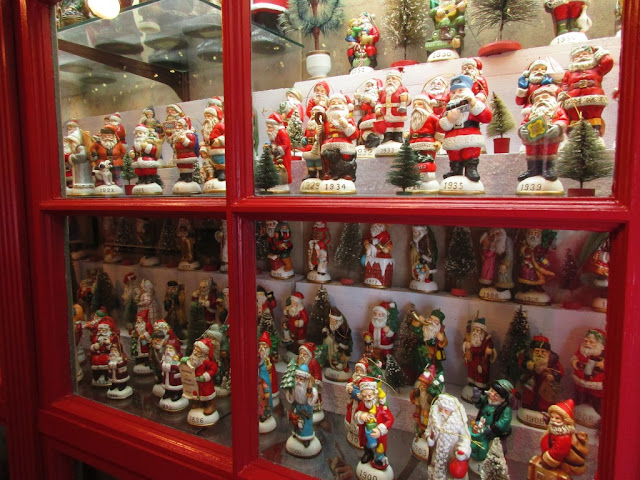 And out in the hallway we finish with this display of Santa Claus figures from around the world. There are many similarities, but also many differences. In some Santa is dressed more like a religious figure (like Saint Nicholas, the Bishop of Myra in Turkey), whereas others are the most famous Thomas Nast/Coca Cola version of a jolly guy in red and white. 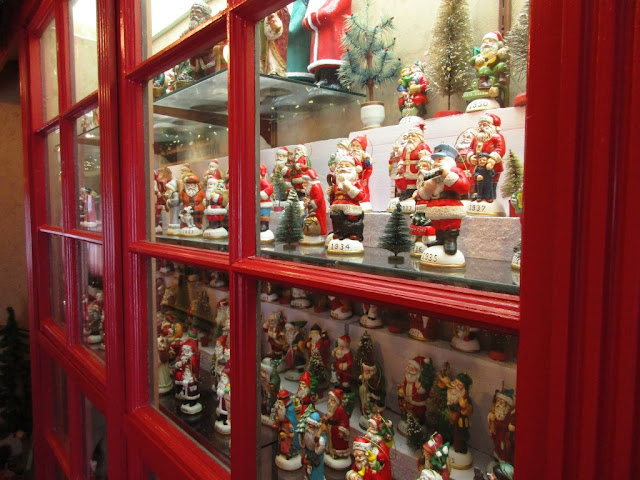 My sister told me the other day that our Santa Claus shelf in the kitchen makes her anxious. Compared to this our little collection doesn't compare much at all. 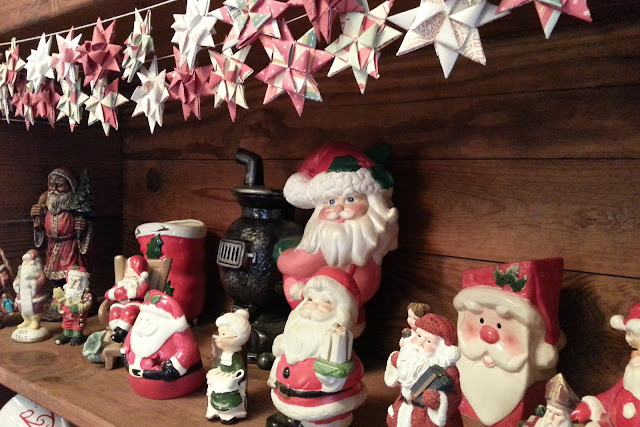 If you want an incredibly comprehensive read of Christmas traditions from everywhere, check out this page. And if you've got some folk traditions to share, either because you live in another country or know someone who does, or simply remember hearing talk of the old days, I would absolutely love to hear it, so please share away!!
From the convoluted brain of Bethany at 10:07 PM