While there are certainly more elaborate and impressive train displays than this one (I showed you one here), model train sets and Christmas trees have gone together since before Bing Crosby tap-danced with Danny Kaye. The first electric train sets made their appearance in 1900, when Joshua Lionel Cowan founded his company. As train travel was the way to go for a long time in this country, model trains were popular into the sixties, when an expanded road system and the popularity of air travel led more Americans to drive or fly to their destinations. Model trains fell by the wayside, but are still enjoyed extensively by hobbyists (my father included). 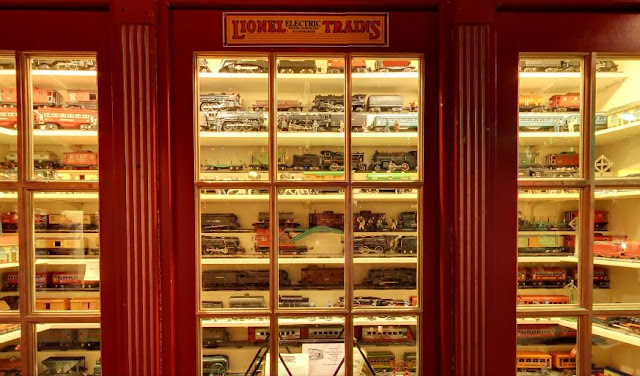 I can't tell you if these are HO, or N, or....some other scale or gauge, but my dad could (and probably explain the virtues and pitfalls of each).

The clear focus of this room is the large display in the center--with three tiers and a thirty-foot diameter, it is literally covered with houses, figures, and animals, all in miniature, all lit with Christmas lights that made it really annoying to get decent pictures. 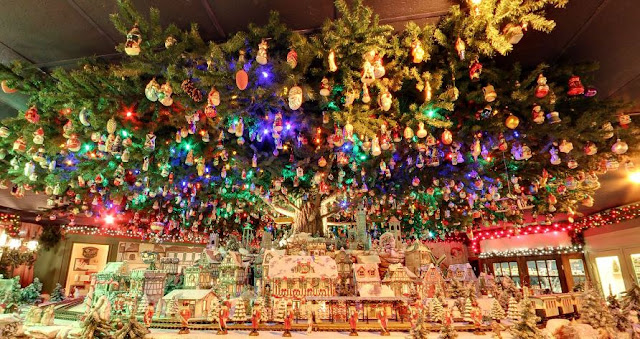 Smack dab in the center is a Christmas tree that sprawls across the ceiling and is decorated with over three thousand glass Christmas ornaments. I once read an article online about a woman who decorated her entire first floor ceiling in just such a manner, but with about ten (maybe twenty?) thousand ornaments. I loved it, but wouldn't want to do it myself (can you imagine how sore your neck would be?). 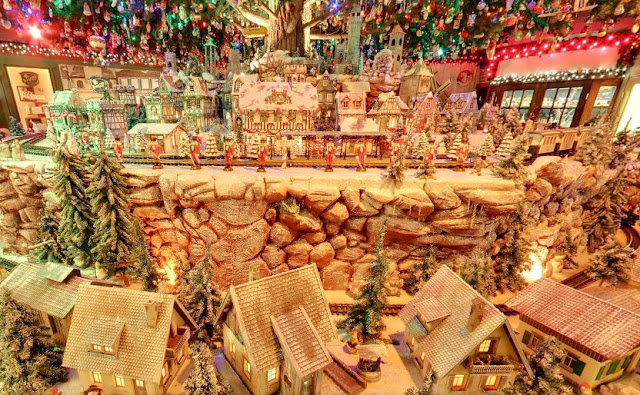 As ever, I spent a lot of time trying to pick out which house I would want to live in. Does anyone else do that, pick out your imaginary house, whether it's on a piece of fabric, or a greeting card, or something like the above? I have no idea why, but I do it constantly. 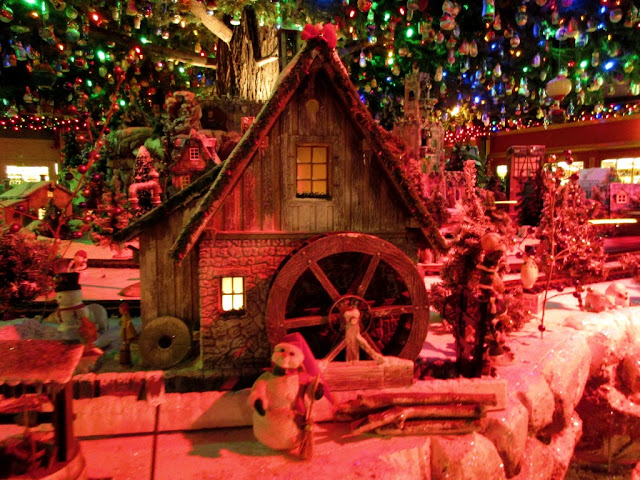 This reminds me of Hanson's Mill on the Little House TV series. 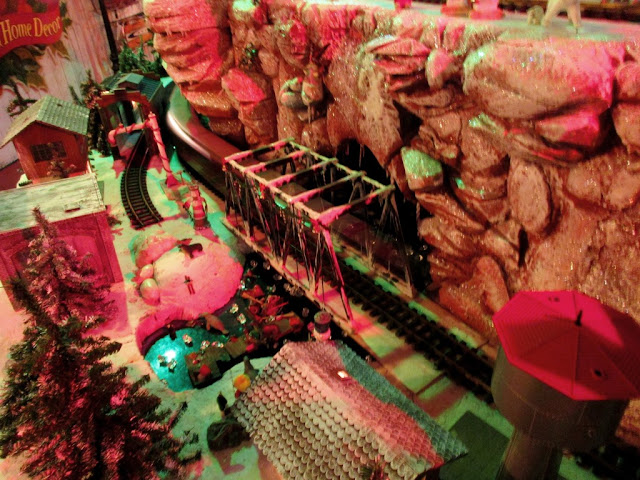 See the train just zipping by?

You can tell that this wasn't made by a meticulous hobbyist, as it seems to be a mish-mosh of trains and accessories, all of them clashing in a wonderfully kitschy and Christmassy way. 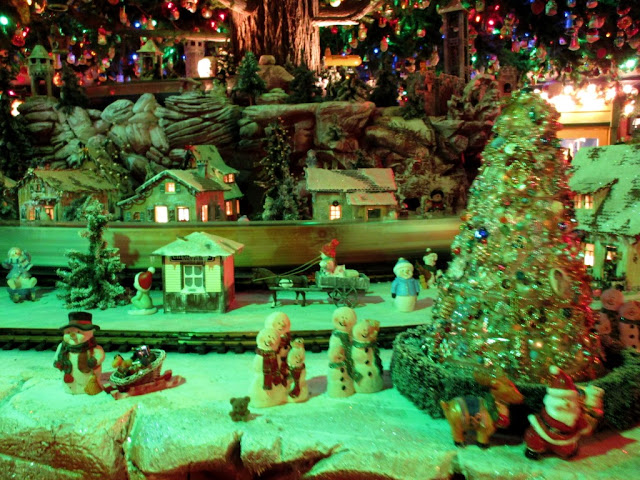 See the train, again in a blur? Cute little snowpeople families, too. 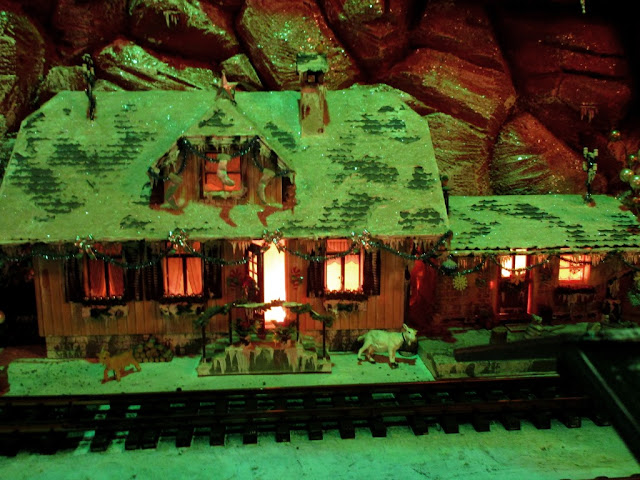 This one makes me think of a Swiss chalet, so I think I might like to live here, but a little further from the tracks (even though the goats seem used to it). 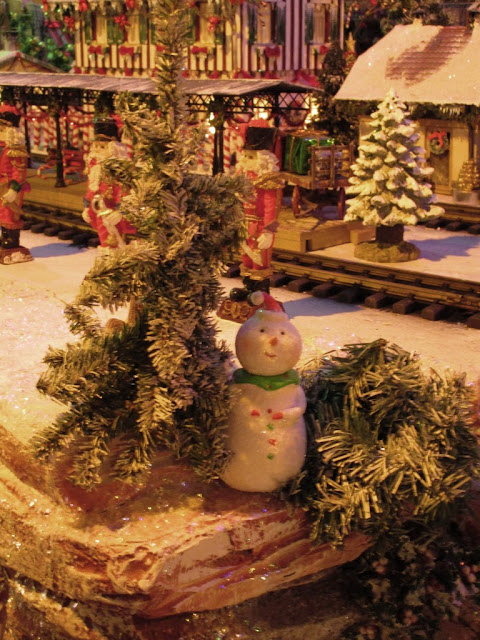 Of course, if I was the banker in town I'd be living in that candy cane house with the red bows everywhere.

One of the side displays in this room consisted of a huge amount of the little paper houses like those we saw in Woolworth's. I would love to know if these all come from a single donor, or if someone scoured the countryside for these or what. There are just so many! I love when everything old is new again--I have been seeing a ton of miniature houses and bottle-brush trees kind of everywhere this year (and not exactly cheap, either). Again, I appear to have a tiny house fixation... 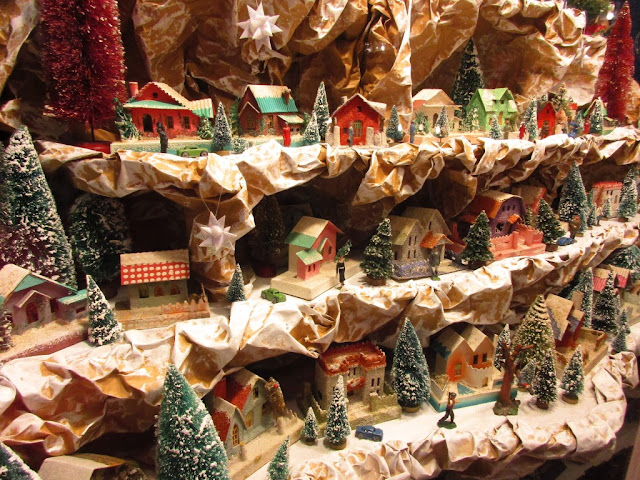 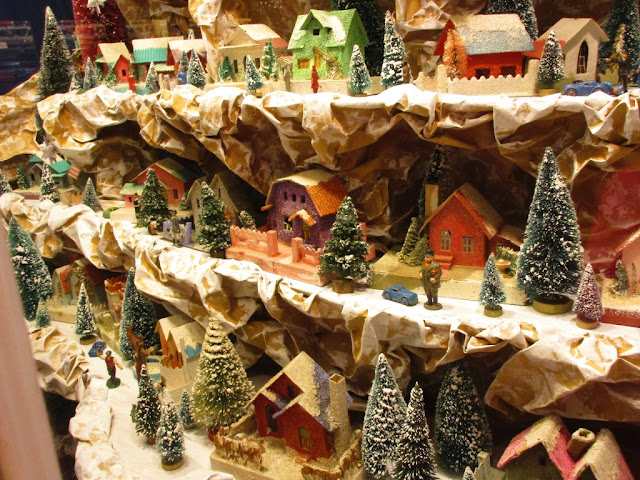 One of my earliest memories is of my dad and his train set. I don't know what it is with boys and trains, but my dad has always loved them, and my nephews did as well (well,one still does, but the other now has technology at his fingertips so it's no longer exciting). He built this big platform out of plywood and what looks like green sandpaper, put up his track, and built the houses and buildings that would make a tiny train town. My brother and I weren't supposed to touch them when he wasn't around, so we would wait for him to come home from work so he could run the trains for us. Eventually they were relegated to attic living, but when I was in ninth grade, my sisters and I convinced him to build a small platform and let us make a town. I forget what we called it, but there was a papier mache mountain in the corner, and I think we decorated it for Christmas. Last year he created a work area in the basement and dabbles in building his own layout. We have to save any trash bits that look like they could be part of something (a chimney, an antenna, etc.), so my mother is loving that. On Saturday a set of paints was delivered, and he said "Now I can paint miniature people!" I come by it honestly, folks, because that sounds like a lot of fun to me, too.
From the convoluted brain of Bethany at 6:30 PM