The Old Five and Dime

Ready? This next part is my absolute most favorite part of the entire museum. I took so many pictures here I should have been embarrassed, but I wasn't so I took more. This isn't all of them, by the way--consider yourself lucky. 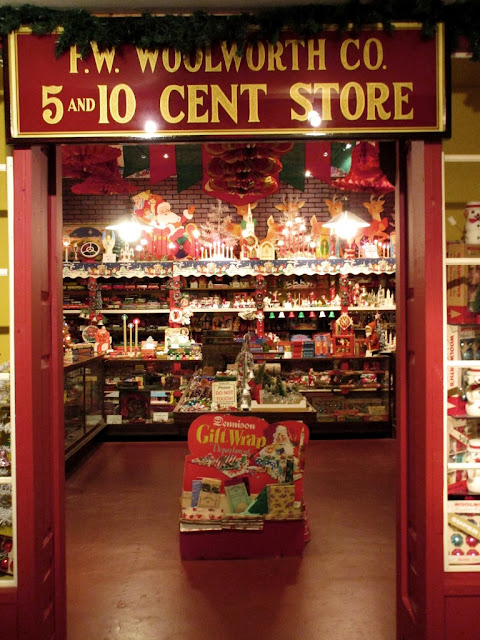 F. W. Woolworth's (no lunch counter in this one, though). Old Frankie opened a store in Utica, NY, which failed after less than a year. At a friend's urging, he opened another store (using the same sign) in Lancaster, PA (not far at all from this museum). 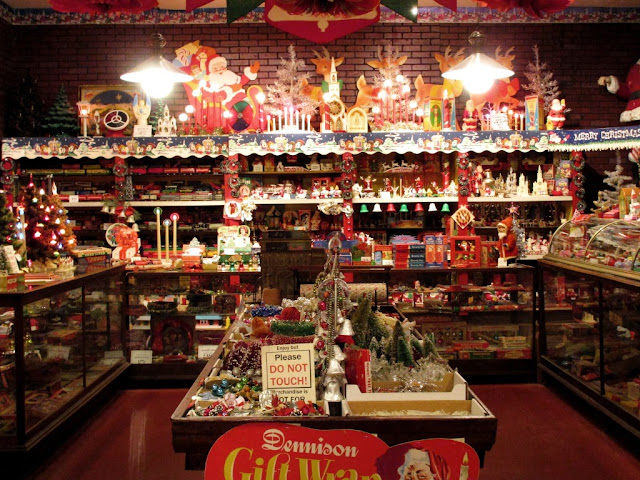 Mr. Woolworth was known as a canny buyer who drove a hard bargain, but also had a good eye for quality products, stocking his shelves with a large variety of things that generally sold well. True to the five and dime moniker, things sold for a nickel or a dime, prices that were very doable for most Americans. This five and ten cent model was in place until the mid-30s, when it was phased out in favor of a variety of prices that were still affordable. 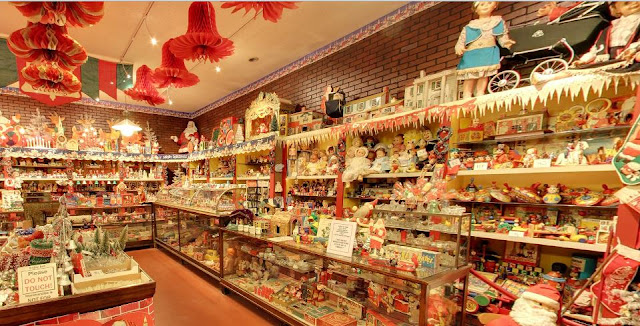 The display cases were made of mahogany with glass dividers. While some items were still probably kept in such cases, most items were put out so that the public could serve themselves without waiting for shop assistants to serve them. These employees instead bustled around, making sure there were no empty places on the shelves, and checking that customers could locate what they needed. 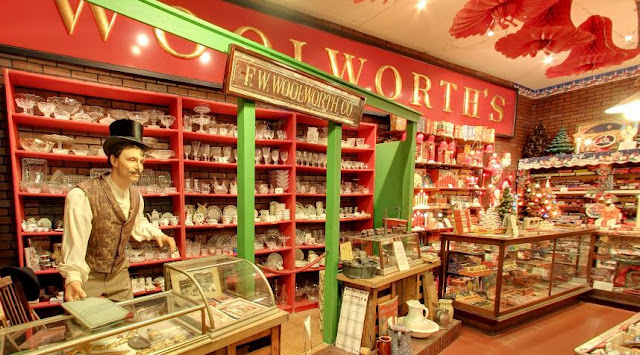 And if you needed it, you could most likely get it at Woolworth's. These stores were long gone by the time I landed on earth, but I've always loved the idea of the old general store (today's nearest approximation is the dollar store, which isn't always a fun time--and I imagine Woolworth's sold higher quality items). This particular room was set up to be reminiscent of a 1950's Woolworth's; as we walked through both of my parents remembered so many of these things that I'd say they were spot on.

The tables were groaning with baubles and bottle brush trees, and tissue paper bells, and so on. 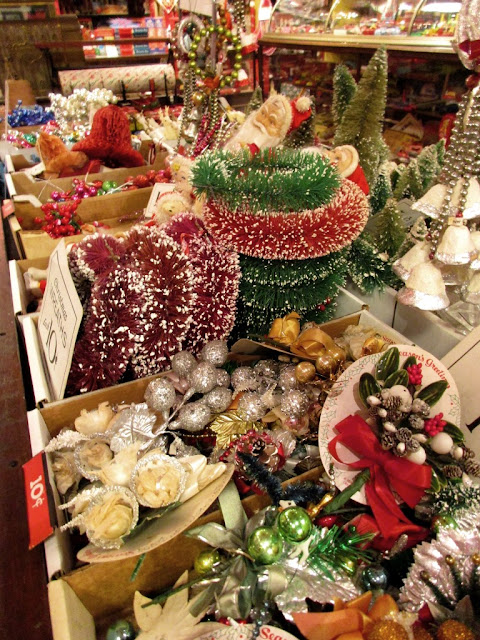 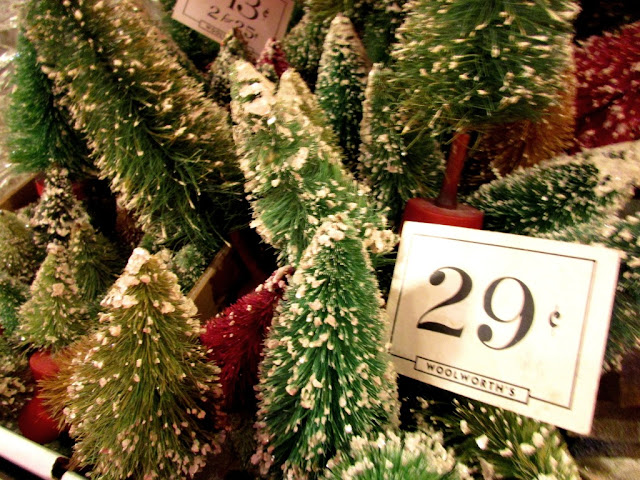 Bottle brush trees are selling for at least ten times this price in craft stores today. I saw a set of six in Target last week for $25.00. I don't think so. I should have shown them this picture and asked if they price-match, hahaha. 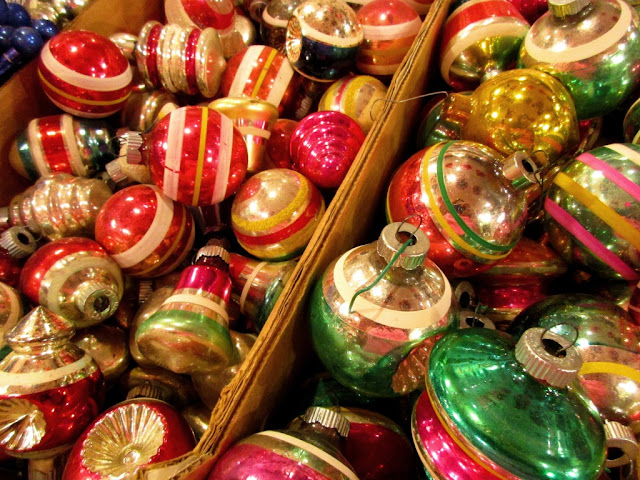 I've always loved vintage colored and shaped glass balls. I put in a bunch in a huge vase when I was decorating, and it has such a huge impact for nearly zero effort. I've got more on glass ornaments in another post for you. 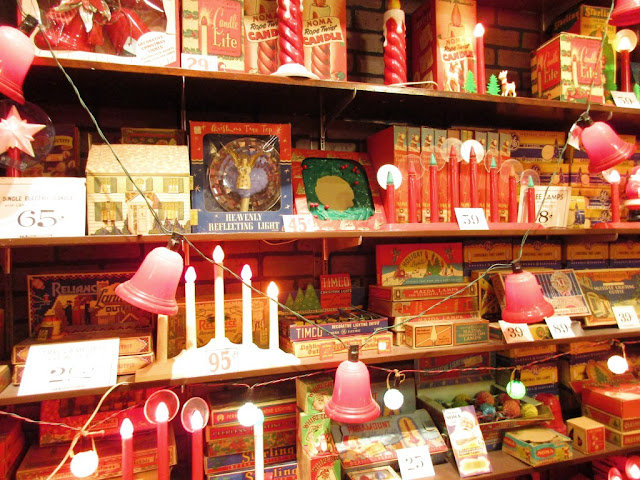 Every kind of decoration imaginable was crowding these shelves. We still have those white plastic candelabras at home. And I remember growing up and everyone else had them, too. All of our parents must have bought their first Christmas decorations at the same types of stores. 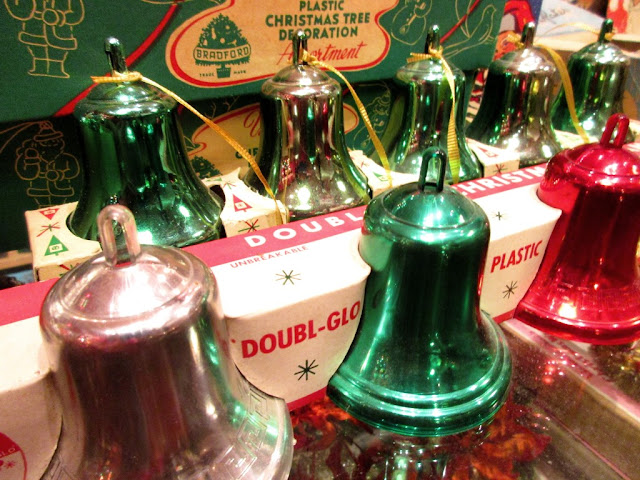 My grandma had little bells like this, all light blue. We still have them on our tree. These were a delight to see on the counter. 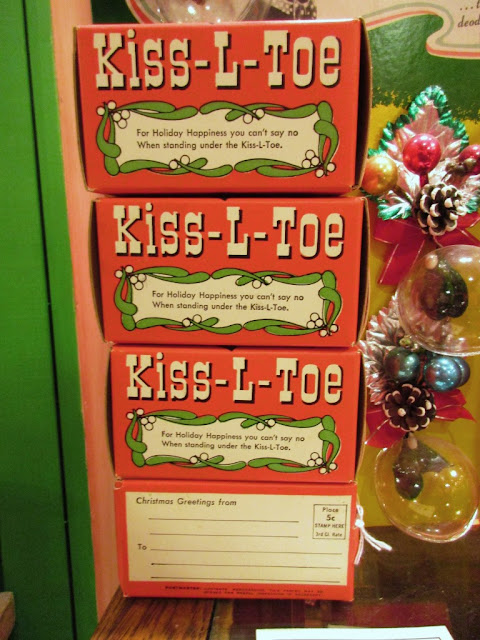 Kiss-l-toe is actually that ornament thing hanging to the right of the boxes. How gaudy looking is that thing? And that's saying something if I'm calling it gaudy... 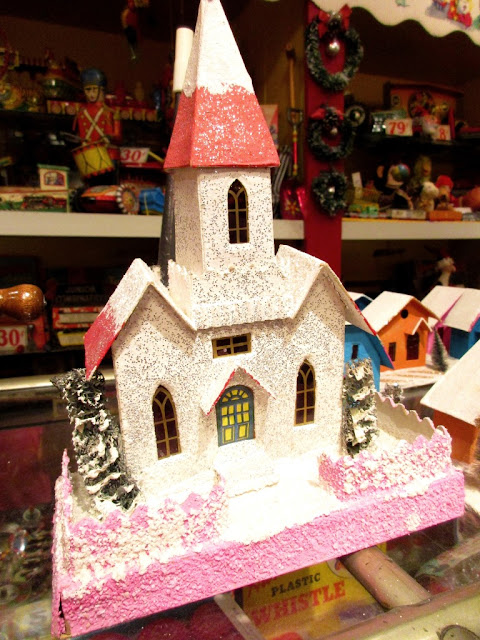 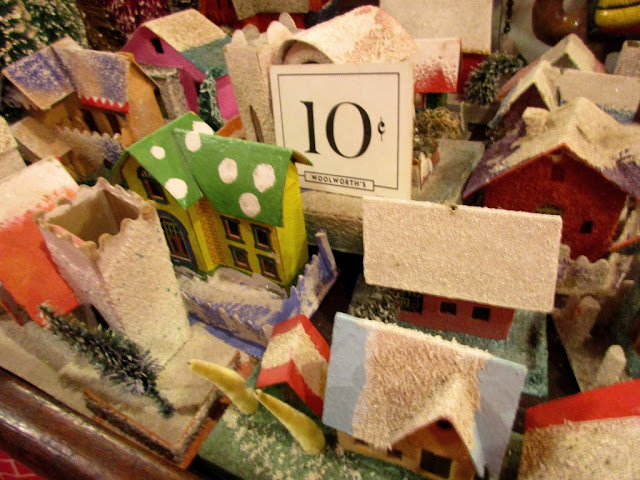 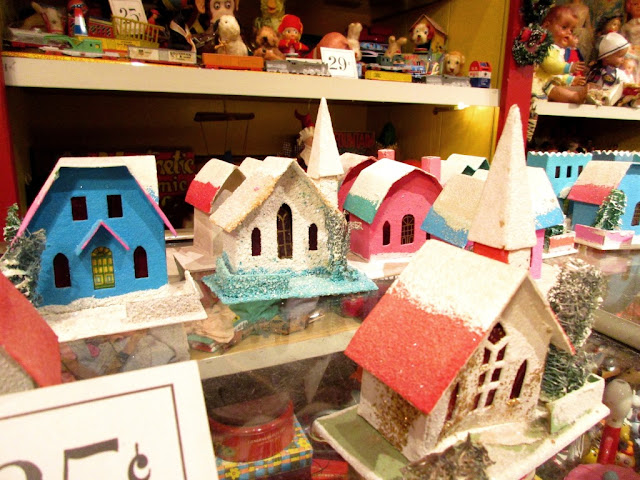 I do so love tiny houses like these. They seem to making a comeback. I bought a few at Joann's a few weeks ago (not twenty five cents, that's for sure), and I saw that Target has some simple ones as well. Of course, these can be made with cardboard and paint, and tutorials can be found quite easily online. My parents both remembered these vividly, and my dad seemed quite annoyed that the originals he grew up with are who-knows-where (we both have that more-is-more Victorian approach when it comes to decorating for Christmas). 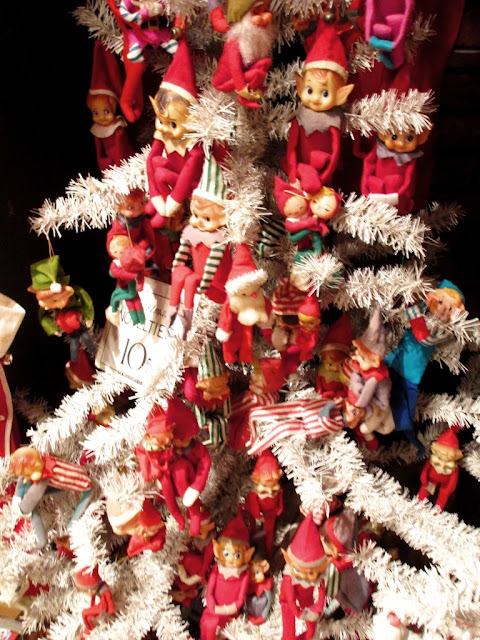 These remind me of that creepy elf-on-a-shelf, so I walked by quickly.

Let us not forget the toys. Sheriff badges, tin whistles, yo-yos, jacks, spinning tops, and so much more filled these cases. Can't you just imagine the stocking-cap-clad children with their faces pressed against the glass, oohing and aahing over this eclectic mix of colorful tin and plastic joy? 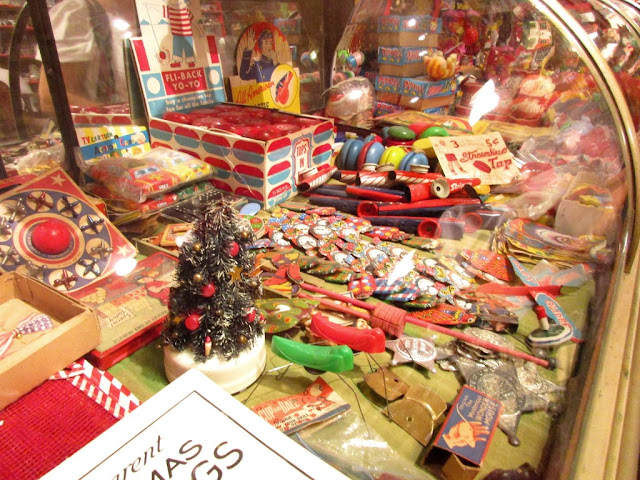 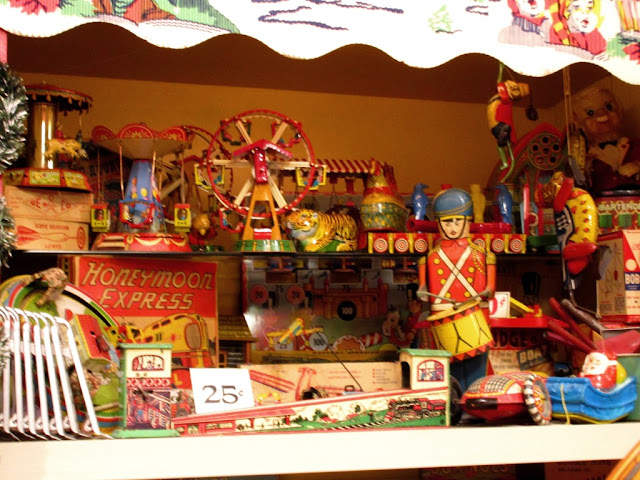 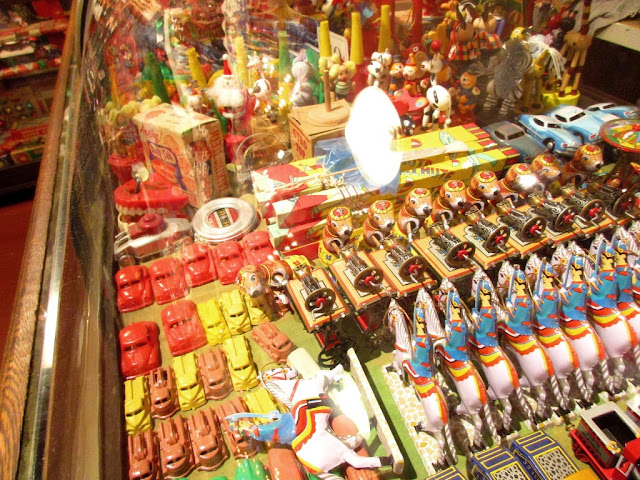 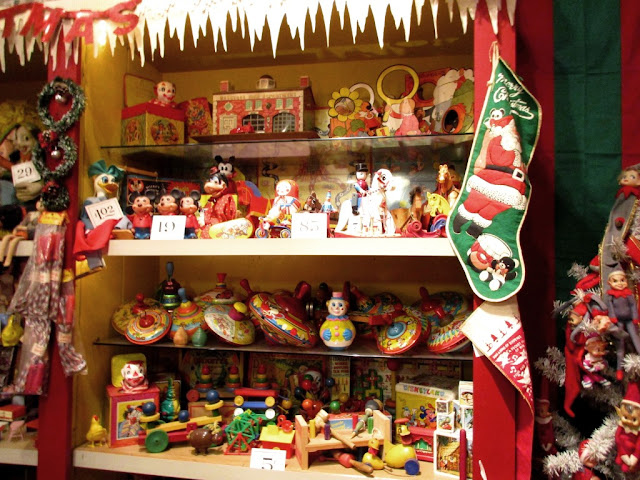 Some of these toys I very much remember from my grandparents' houses, or actually having them to play with--the metal tops, the jack-in-the-boxes, the tin guitars, the jump ropes--that wonderful mix of toys that didn't require electricity or batteries or a fat wallet to pay for. 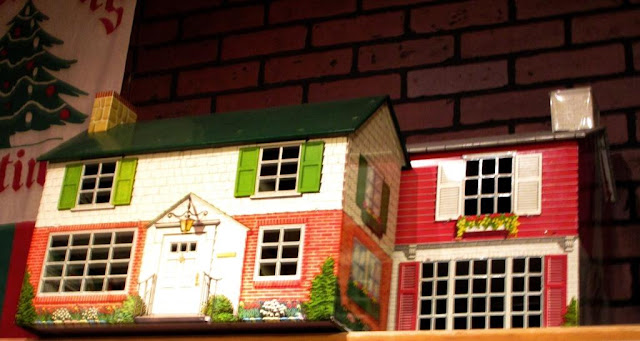 When my mom saw this she gasped and said "Your aunt and I used to have that dollhouse!" So I had to take a picture of it. I don't know why, but hearing that almost made me feel sad. Kind of like if you acknowledge that adults were once kids, then that must mean you're getting older too, and who wants to deal with that? 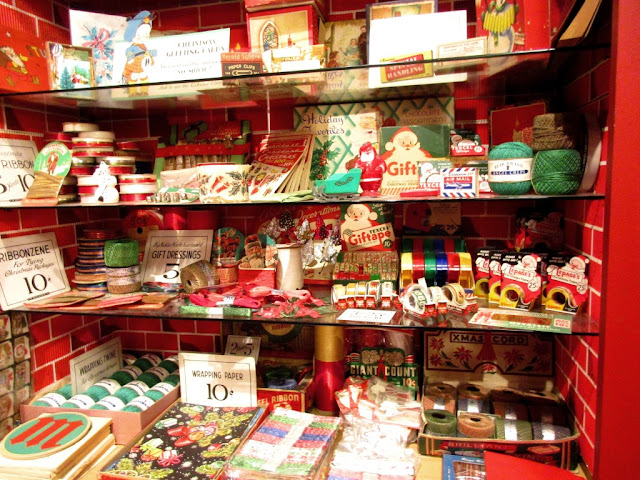 Of course you're going to need an assortment of wrapping paraphernalia, and I don't see anything missing here. We've got tissue paper, wrapping paper, ribbon, cotton cord, tape, paper clips, and embellishments (called 'gift dressings' in that sign up there).

I so very much wished I could have shopped in this store. So warm, so bright, and cheerful. If you did shop in one, you'd have made your way to this tank of a cash register with its ka-chinging bell to indicate a sale-- 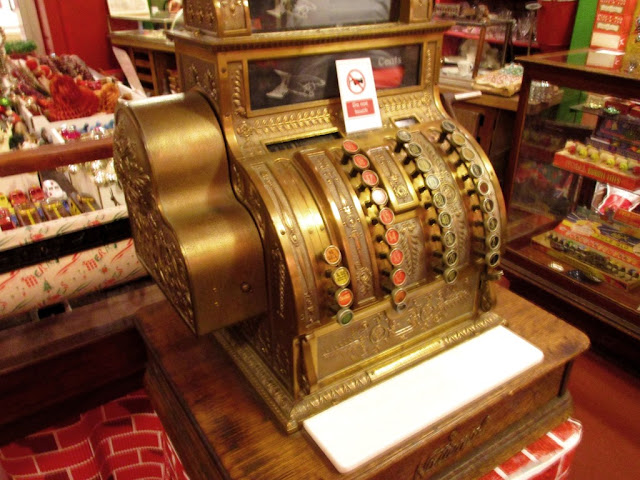 --where you could also get your goodies wrapped. 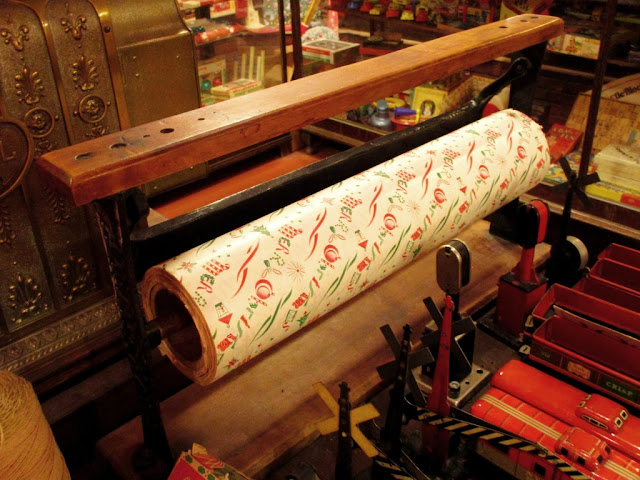 I used to love watching TV shows when people would come out of the general store with their brown packages tied in string. Now you get a plastic bag (or bring your own--but I think people should carry baskets because that would be fun). And if you buy something glass, tip-toe home because they're not wrapping it in tissue for you.

Bring back memories for any of you? I'd love to hear about it! Next we'll learn a tad about glass-blown ornaments. Hold on to your hats!
From the convoluted brain of Bethany at 11:26 AM