Hey gang! A couple years ago I posted these gift card holders. I loved making those (and I can't believe it was two years ago--last December is a blur and time just flies!) so this year I made some more (but a teensy bit differently). 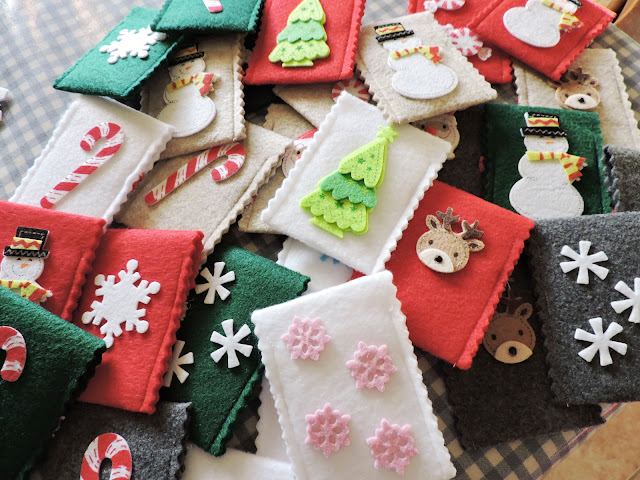 Instead of sewing on a ton of buttons I made them the same way (using this tutorial) regarding measurements, BUT I didn't curve the top edge (I made it come to a point) and I sewed a piece of ribbon down to serve as a sort of tuck closure. 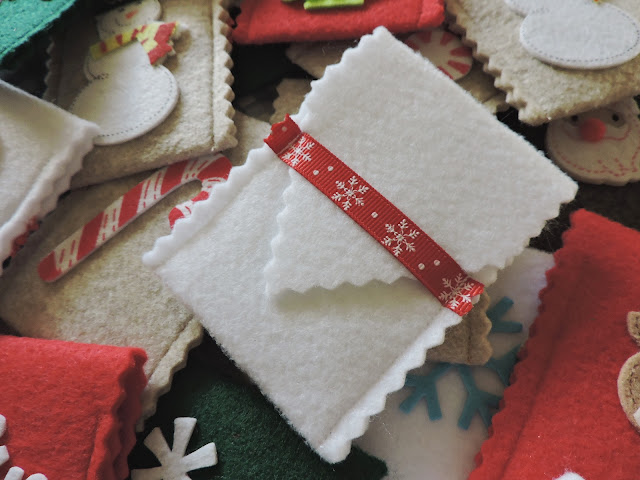 The ribbon is placed about two inches up from the folded bottom edge, and holds everything nice and secure. I love pinked edges and their cuteness, but straight-edge is perfectly fine too. I didn't use wool felt as I just won't spend that money for something like this, but Joann's did have a nice sturdy felt (only in basic colors--the fun colors were a bit floppy and uneven in their thickness/thinness) that made these feel really nice.

I wanted a little more something to them as the back was just plain, so I bought some of those sticky-back felt appliques that are all over the craft stores right now. 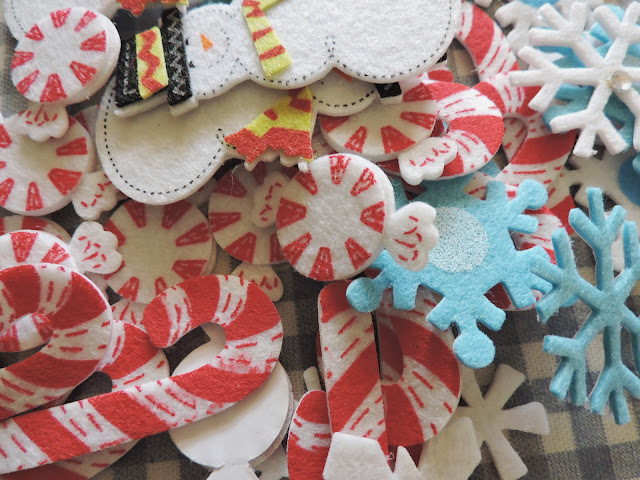 Cute, aren't they? Little unassuming felt shapes. Felt shapes that absolutely stink like what I guess Chinese factories smell like (not trying to be rude or xenophobic, haha, just saying--wow these things did smell unpleasant). I had read something about putting smelly shoes in the freezer to out the stink, so I put these in a paper bag and sat them in the freezer. And it actually helped quite a bit!! So then I laid them out and gave them a dose of Febreeze. And now there's not a whiff of the manufacturing process about them. They stuck fine to the felt, but I wanted them to really stick (especially any teeny snowflake points) so I hit them with a squirt of Elmer's spray adhesive and now they really stick!

So, yes, if you're so inclined you can find gift card holders at the dollar store, or you can spend much more at other stores. But for a sheet of felt and some ribbon you can make your own--one small sheet of felt yields three, and the large sheet six. Plus these were fun to make, and oddly satisfying to see in a basket or all piled up.

Happy gifting!
From the convoluted brain of Bethany at 9:59 AM