The next stop on our journey is the Antique Emporium. This room is a constantly changing exhibit of ornaments and other paraphernalia. Seriously--I think any job in this place must be the most fun job ever! Unless it's finding that one bulb that caused that whole string to go out... 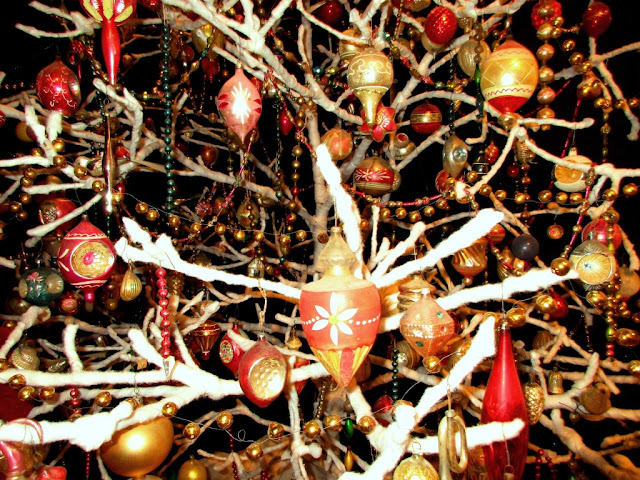 Here's some generic sparkle for you. I love shiny baubles like this.


This room is adorned on both sides with floor-to-ceiling wood and glass cabinets, set with more fragile items. There's a healthy dose of 'you don't see that much anymore' going on in here (hence the name of the room, I suppose). 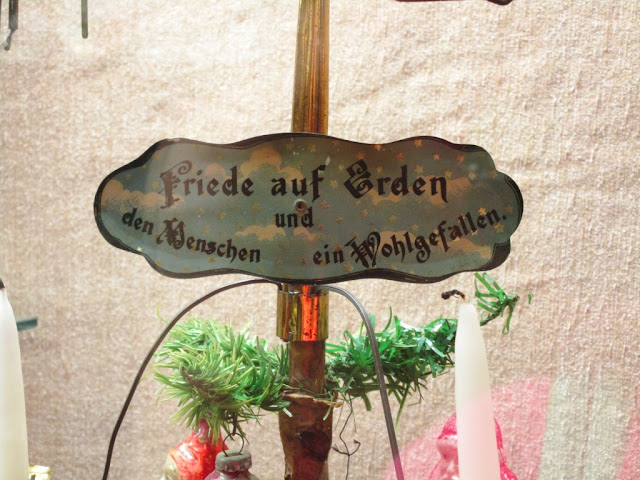 Peace on earth, and good well to man. A phrase for the ages, but one we seem to get further away from these days. 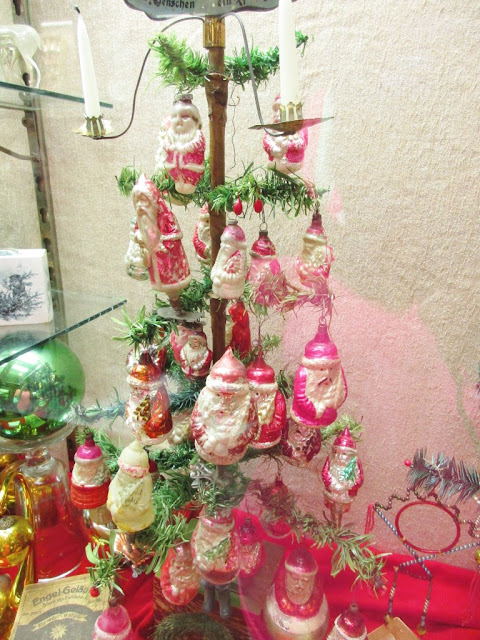 Most countries that celebrate Christmas have a representation of Santa--can't we all just get along? Honestly, if Santa was for adults there'd sure be a lot of empty stockings based on what we tell children will get them the old coal-poop combo. 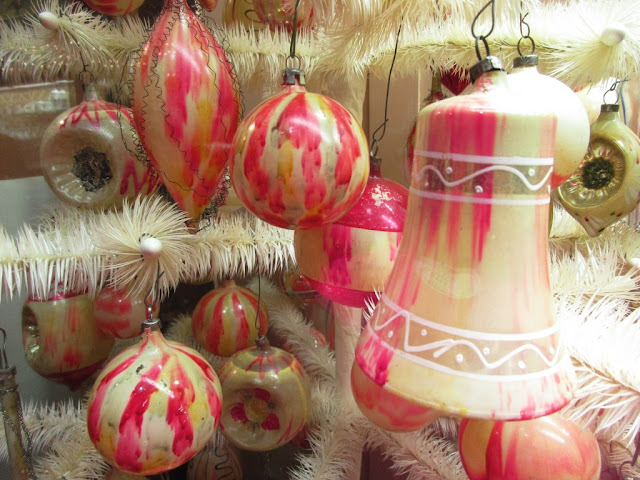 I don't know if these were from the same collection as the Santas, but the colors are very similar.

When I saw these 'leftovers' I thought "I bet these folks never met a scrap of yarn or fabric they couldn't put to use." And in case you ever worry that what is made of scraps might not be as pretty as the standard stuff, look at these ornaments. My favorite is the one kind of just left of bottom-center in a bit of shadow--there's an indentation with a flower painted on it. The story goes that when the day was done, the paint pots were dumped over remaining blown glass ornaments. The paint would dribble down the sides, creating an effect unique to each ornament. They were then left to dry overnight, with new designs sometimes painted over the drips (like on that bell). Original end-of-day ornaments can be found for a bit of dough on eBay and Etsy. 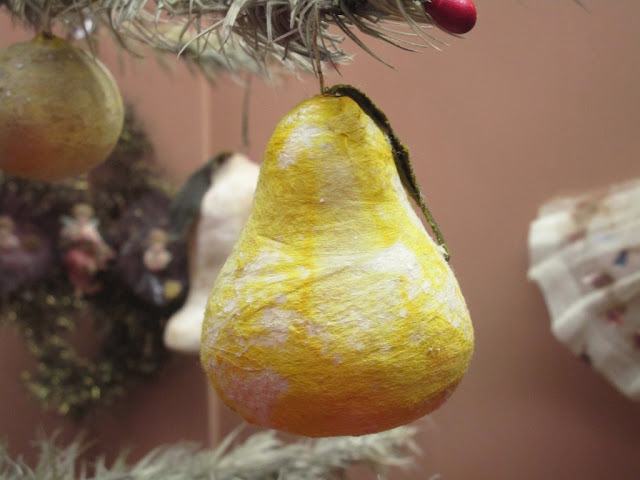 Spun cotton. This reminds me of angel hair--remember that? Whose bright idea was it to spin glass into a teeny thread? Or lead into tinsel, for that matter.

Spun cotton is a technique used by German (and probably other) artisans for making Christmas ornaments. Items such as this pear were a Christmas staple on many European Christmas trees. Cotton was shaped into various items, usually found in nature (fruits, animals, birds, and so on). Once the ornaments were stiffened and dry, they would then be painted. Some ornaments (like fruit) were sometimes given silk leaves and other embellishments to up the bling factor a little bit, while tinsel and hair might be added to animal ornaments to make them look a bit more realistic. Again, these can be found online but if you're finding them cheaply they probably don't know what they have or aren't selling originals. 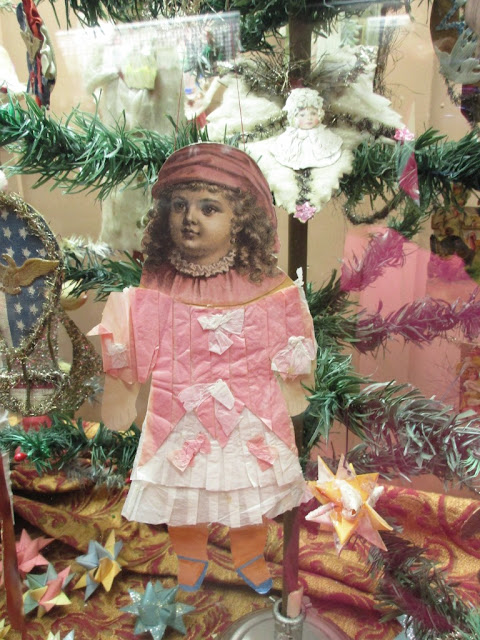 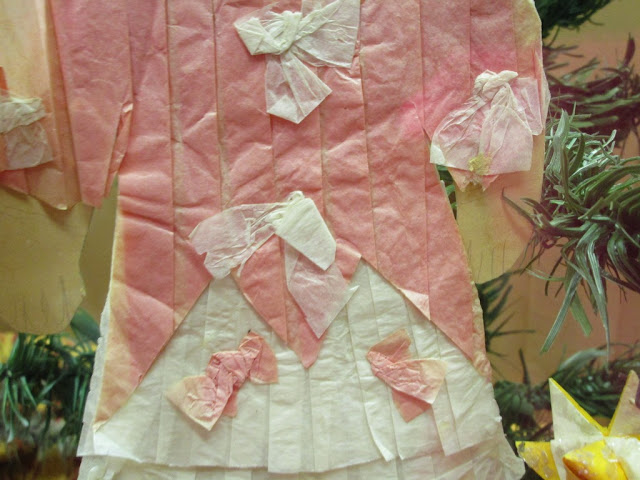 Paper ornaments were among the favorite, as paper was a pretty economical medium, and no special skills were needed. Often pretty pictures were cut from magazines of the day, glued to stiff paper and hung on the tree. Others used a picture as a base with which to build upon, as in this tissue-paper-dress girl just above. You can tell that her face come from some printed material, but the rest is handmade. I imagine that, before fading and smashing occurred, this was probably quite pretty (and very easy to store).

Sometimes, though, paper was manipulated into the ornament itself-- 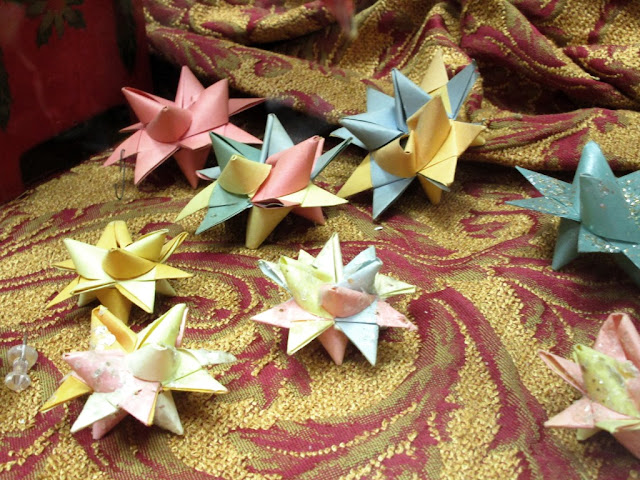 --like in these German paper stars. I made a bunch of these several years ago (smaller, and not as pointy as it appears they should have been), and I still hang them up every year. Scrapbook paper is sometimes on sale for amazingly cheap prices in a ton of patterns and colors, so if you're into a pretty effective craft that doesn't cost much, I'd suggest these Froebel stern. 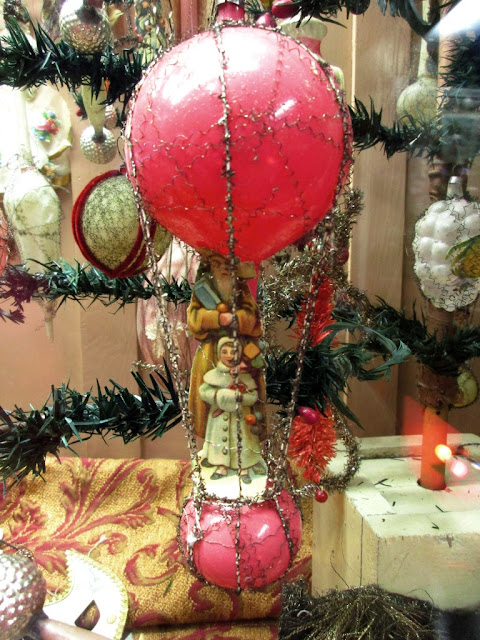 Germans don't mess around when it comes to ornaments, do they?

Wire-wrapped ornaments were quite popular in the Victorian era where less-is-more was blasphemy, and more-is-more was gospel. They loved to embellish everything, so when Prince Albert and Queen Victoria went gaga over Christmas trees, the ornaments were really something to behold. It's primarily thanks to this duo that so much of what we know as Christmas went from Germany to England, and then across to the States, among other places.

Anyway, that ornament is known as a double-balloon. The pink (red?) balls are made of blown glass, and connected by something called a pike, which you can see just to the right of Santa's shoulder. A lithograph scrap was pasted on, and then very thin, stretched out wire was wrapped around and around (sometimes in extremely ornate patterns) to embellish. 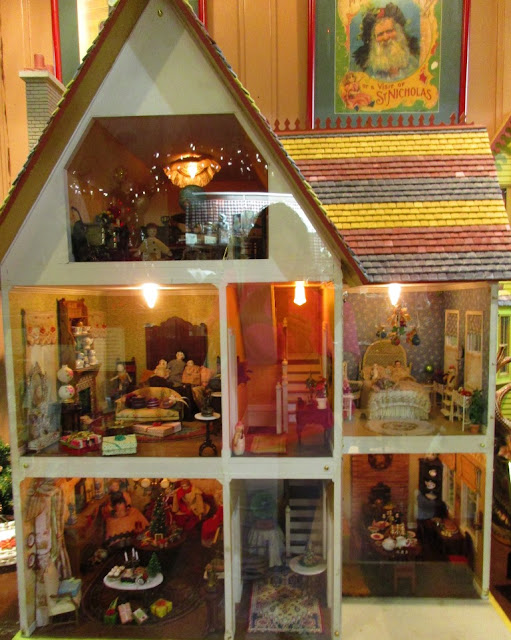 Dollhouses have always been quite popular, and working with miniatures continues to be a popular pastime. If you want to see some amazing work check out Meream's blog. The level of detail that appears in such a tiny scale has always amazed me, yet I truly delight in details. I find it so touching to think "Oh, I can't believe they thought of that" when it seems like such an inconsequential thing. 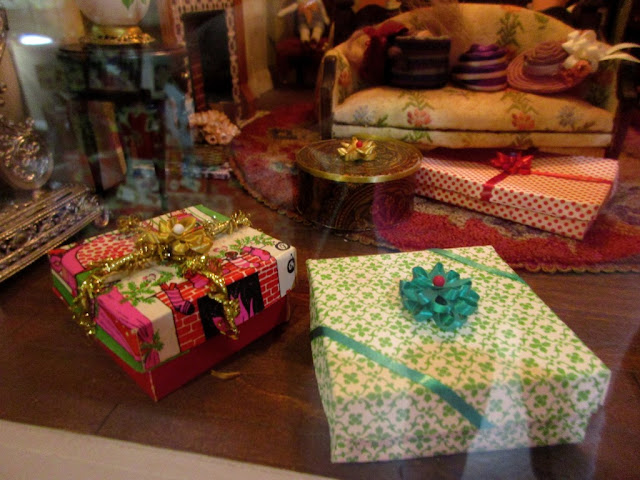 Like the level of detail in the tiny hats on the sofa, and the wrapping job on those wee boxes. And the tile work around the fireplace. The curtains. The rug in the hall. OK, I'll stop. This display was set up in one of two display cases in the center of the room. 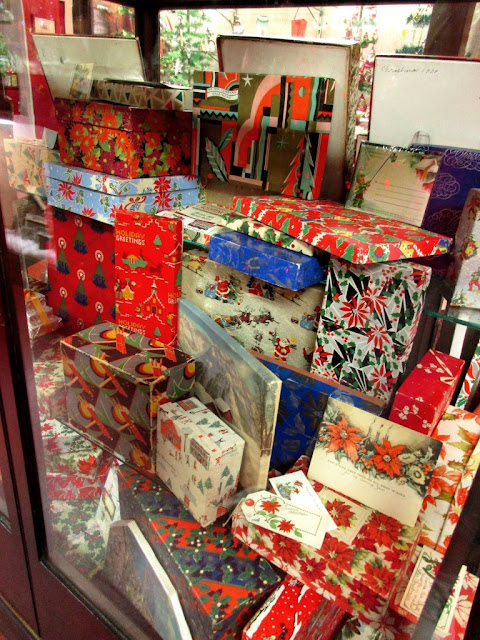 And the other held this. There is something so delightful about piles of presents, even when they're not for you, haha. All the colors, and designs, mish-moshed together, in a bright, scrappy display of mystery. Whenever they show Christmas episodes of TV shows, I always pay attention to how they wrap presents. Don't know why, just always have. Oddly, when it comes to my own wrapping, I get too impatient to make it splendiferous.

On the other side of the room were more display cases. Several of them held dishes, which I didn't get a picture of as I didn't find them too interesting. But one held some random items. 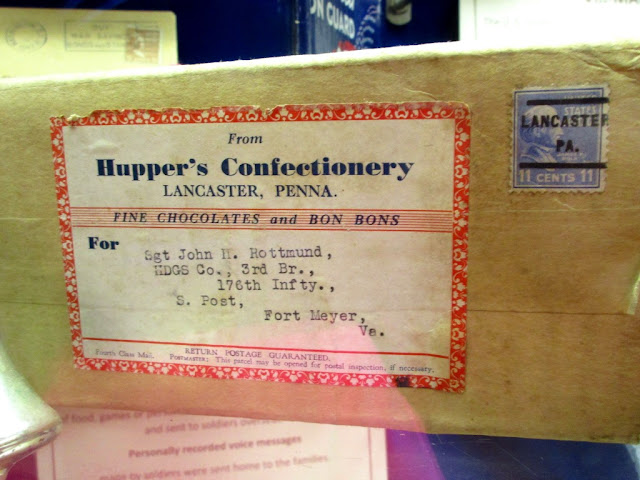 Just curious--how much did you just pay for stamps? Not eleven cents, I bet.

Pennsylvania used to boast more candymakers (including Hershey's, Whitman's and Luden's) than any other state. So I don't really have a sweet tooth; I just have an incredible amount of state pride. I imagine a package like this, whether you were stationed on home soil or far away was quite welcome and passed around in the sharing spirit of the season. 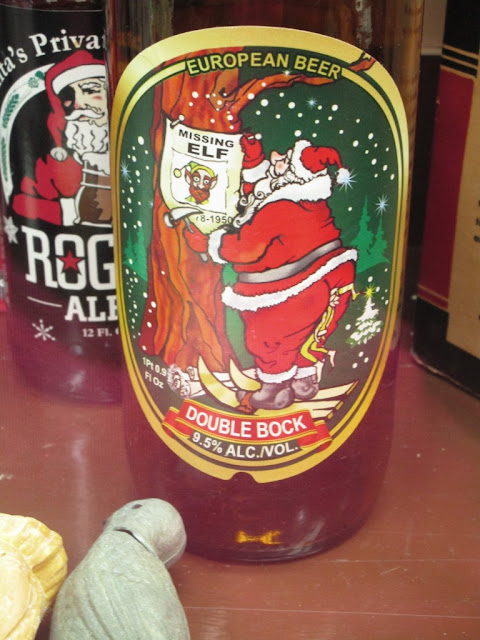 This last one I took because of a silly family story. My cousin (and I think my sister was going with him?) was/were headed to a Christmas party. A very popular beer at this time of year is Mad Elf, which, like that above, has a higher-than normal alcohol content. On their way out the door, his aunt called after him/them "Don't go drinking too many of those Mad Elfs!" Well, we found this quite hysterical and repeat it quite often. Another year, after having a couple of these, my sister went to see a movie with some friends (I think it was Sherlock Holmes). When she came home, I asked how it was and she said "Not bad, pretty good. I liked it." When I asked her to tell me about it the next day, she laughed and said "I don't remember--we were drinking Mad Elf before we went!" I imagine the designated driver had a lot of fun that night...

I'm almost certain you're tired of me rambling on right now, so I'll just quietly slink out the door and wait for everyone at the next exhibit (where I promise I won't talk as much).
From the convoluted brain of Bethany at 9:37 AM