The most recent block we were assigned is called Circle of Geese. I've re-christened it Duck Duck Goose. Remember that game? You sat in a circle, someone was the 'ducker,' and patted each person on the head calling them a duck. Whoever was deemed the goose had to chase them around the circle. If you caught them...I forget what happened. But if you didn't and they made it to their former seat you then became the ducker. I used to think this was fun when I was little. Now I think that by the time it would take me to get up and start running I could make a quilt.

This was a fairly complicated paper-pieced block. There were a lot of little bits that went into it, but it was fun. I've really enjoyed this more precise work. When I'm concentrating on my sewing it comes out much better than when I'm very casual and eyeball a "precise" quarter inch seam. 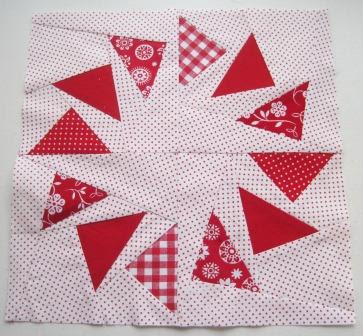 I only have one teensy error that I managed to cover up fairly well, so I think you'd have to really search for it. I'm not even gonna tell you where it is. Ripping stitches out of the paper without destroying the template is practically impossible, and I didn't want to start over as it was the next to the last piece on the last block, so it shall live on forever. This block looks like it wouldn't be difficult, but there sure are a lot of points and seams in this one. 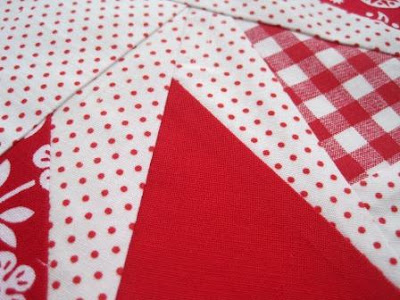 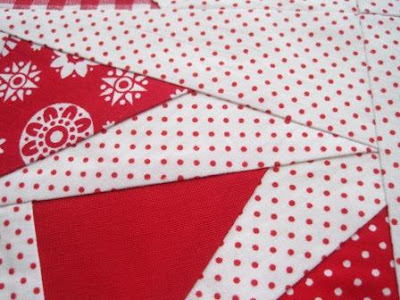 My formerly large pile of red and white fabrics has dwindled a fair bit, but the scrap bag has gotten fat. Hopefully I can use many of them for this month's blocks, which are all various forms of applique. 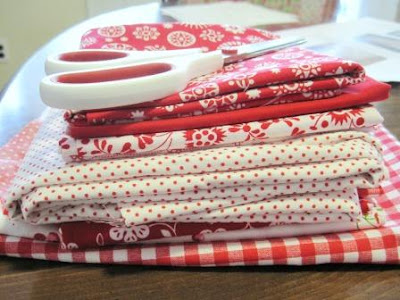 We are at the official halfway mark for the quilt along, so I laid out all my blocks and snapped a pic. These are all the "assigned" blocks as well as the bonus blocks I did. You can very much see where I'll have to play with the layout as some sections are red heavy and others white heavy, but overall it's pretty fairly balanced. 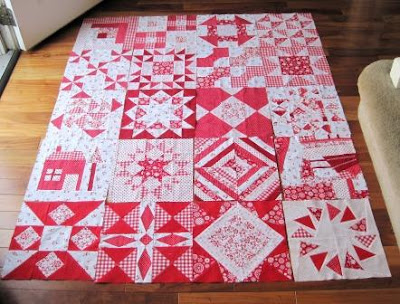 I do really love the way it's coming together, though. I can't believe we're only halfway though...by the time it's finished I'll have enough blocks to cover a bed for a giant.

I've been working on some fun felty bits, of which I can only share a few as the others are for a Christmas swap and I don't want to spoil the surprise. I hope to finish those up this weekend. I'm almost finished my baby blanket, and I'll give you a sneaky peak as I don't want to spoil that surprise either in case that person reads this blog... Don't you just love Christmas secrets? I've also got my Christmas quilt to share, as well as some Christmas decor. I suppose I must shop at some point, too. It's all coming too fast! And it's only the 2nd of December...

Back soon, my dears! Enjoy your Friday!
From the convoluted brain of Bethany at 10:45 AM